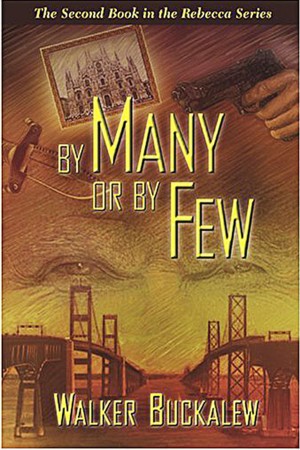 By Many or by Few

By Walker Buckalew
Awarded the Independent Publishers Association Silver Medal for Best Religious Fiction. Rebecca Manguson, a 27-year-old London school teacher, flies to the U.S. to pursue a romance she'd begun with American Matt Clark. She is introduced to a man about whom she receives visions that warn her of a plot to reverse the moral compass of American children. She pursues the mystery to its violent end. More
Compelling, well-written, and action-packed, By Many or By Few, the second entry in an outstanding series, stands out among recent spiritual thrillers in presenting an entertaining mystery while adhering to Christian truth.

Rebecca Manguson travels to New York for a tender reunion with Matt Clark, the dashing former U.S. Navy officer with whom she survived a life-and-death battle in the timeless war of good versus evil. Within hours of arriving, however, she finds herself escaping from a kidnapping attempt and on the run, hiding from the man she should have been able to trust, heart, spirit, and soul.

Something ancient is at work, something that seeks to use American society to plant insidious seeds of evil in the minds and morals of its most vulnerable and hopeful citizens – children.

Uncovering and preventing this conspiracy takes Rebecca, her twin brother, Luke, detective Sid Belton, Bible scholar Dr. Eleanor Chapel, and a tested-but-renewed Matt from the gritty streets of Manhattan to the scenic shores of Chesapeake Bay, where Rebecca finds herself caught in a desperate showdown to prevent the death of a world leader and the domino effect that would allow corruption and destruction.

Walker Buckalew received a bachelor's degree in English and religion from Duke University before serving as an officer on the aircraft carrier USS Constellation. Following his Navy service, Buckalew worked as a public school teacher and coach while earning his M.Ed. and Ph.D. degrees from the University of Wyoming.

Buckalew then began a career in higher education, teaching at St. Lawrence University in Canton, New York, and the University of North Carolina at Asheville. He was later appointed president and chief academic officer at Cumberland University in Lebanon, Tennessee. Since 1989, he has served as a consultant to private schools throughout North America. He lives with his wife, Dr. Linda Mason Hall, in Wilmington, Delaware.

Also in Series: The Rebecca Series

You have subscribed to alerts for Walker Buckalew.

You have been added to Walker Buckalew's favorite list.

You can also sign-up to receive email notifications whenever Walker Buckalew releases a new book.