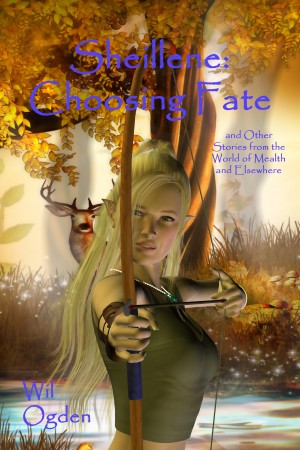 Wil Ogden (sometimes begrudgingly 'Will' but never 'Bill') was born in 1969 in Baltimore MD. He attended grade schools up and down the east coast, spending the last of those years in Lionville, Pennsylvania. In the early 1990's he moved to Nebraska and has lived there ever since, though at times since then he has also maintained residences in New Orleans (LA), Denver (CO), St. Louis(MO), Des Moines (IA), Fort Worth (TX) and Raleigh (NC).

He was destined to be a wastrel but thwarted fate. During his second junior year in high school he discovered he had a muse and a talent for writing. Despite taking almost a decade to complete a bachelor's degree (He changed majors eleven times) he managed to grow up. Along the way he worked as a blacksmith, a record store manager, a candy store manager, too many years in food service, a four year stint in the USAF, and finally settled down into Information Technology, which he uses to pay the bills and support his family of himself, his wife, two sons, a daughter, a dog, three cats, three chickens, a snake, a chinchilla and two parakeets.

He has several published Short Stories in various publications with more always on the way.

He also has one novel published, again with several more on the way.

You have subscribed to alerts for Wil Ogden.

You have been added to Wil Ogden's favorite list.

You can also sign-up to receive email notifications whenever Wil Ogden releases a new book.