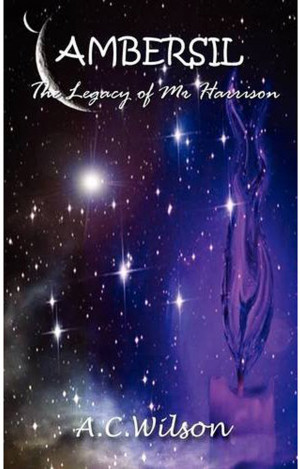 Ambersil: The Legacy of Mr Harrison

By A C Wilson
Flesch Reading Ease 78.2 Grade Level 5.8
Imagination....take a journey into the world unlike our own. A world of monsters and heroes and a tree we call home. Explore a new world with an ordinary boy as he discovers life is so much more complicated than a sleepy village in little England. A tale of fantasy and magic. A tale of growing up and discovery, friendship and loss. Join Thomas,to Voreal. More
Ambersil is a story of fantasy with elements of mystery, swords and magic. A tale of growing up and discovery, friendship and loss. The young hero Thomas Harrison and his friends must discover how and why they are in this world, meeting new and strange friends along the way, as well as powerful and dangerous enemies with evil on their minds as they try to live on in hopes of seeing they homes and families once again. A world of imagination, danger and troublesome imps. Surrounded by strange wonders, our friends must encounter man sized Lizards with razor sharp teeth, wolves larger than tigers and an impressive, well spoken dragon!

Ambersil is about a magical world called Voreal. Of 'custodians of the peace' called Guardians. People with special abilities and symbiotic creatures called Magi. Ambersil - The Legacy of Mr.Harrison chronicles a group of children that are taken to this world by the mysterious 'Nightwatcher,' a blue fox, as they discover they are Guardians also....but there are other things a foot....things of the sword, magic, fantasy, dragons and family.

A.C Wilson, known to everyone else as Al is a life long writer with a passion for expression. He has been a music producer and artist/DJ since the age of 15 and has worked in the trance music scene in Public Relations, Music development and Artists and Repertoire. He has been editor and administrator for a number of sites and continues to make music professionally today. (Which includes a OST for his first book with the help of Sound Essentials) He has been entertaining people with stories and tails since his child hood. After many years pursuing his work life and being told he wasn't good enough for creative writing in his youth, Al decided enough was enough of bottling his ideas, worlds and visions to himself. He completed the first book of his 'Legacy' trilogy and got the book published in 2011. After promising reviews from readers, Al has decided to broaden the horizons of his new found world with an e-book release. His second book 'The Fortress Forbidden - The Legacy of Mr.Harrison' is currently making good progress and bringing a lot of joy to an ever surprised author.

Learn more about A C Wilson

A.C.Wilson - Ambersil - OST - In The Grasp of Evil
**Free Download - http://soundcloud.com/a-c-wilson ** Chapter 22, this was a real epic piece. This tells of the chaotic battles at the end of the book, hoping that you can hear the underground nature of this piece. There are many themes included as well as action elements with big brass for the heroes. Bell tolls for the evil guys. Darker elements and light elements.

You have subscribed to alerts for A C Wilson.

You have been added to A C Wilson's favorite list.

You can also sign-up to receive email notifications whenever A C Wilson releases a new book.