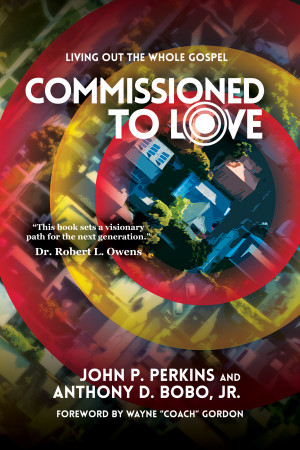 Commissioned to Love: Living Out the Whole Gospel

In this book, readers will find a clear introduction to the eight principles of Christian Community Development along with a consideration of each of the Commission Circles outlined by Jesus in Acts 1:8, identifying our Jerusalem, Judea, Samaria, and ends of the earth. They ask what it looks like for the Church to live and move as the people of Jesus, empowered by His Holy Spirit, in each of these spheres of influence.

This book is both theoretical and practical, as the authors go on to explain what these intersections look like in the lived experience of their practical ministries.

“The authors have woven a convincing case that the mission of the gospel is intrinsic and inescapably holistic for and to all. I believe that the church and others who read this book would benefit greatly as they will find in these principles a well-rounded approach for a missional thrust for the next era of leaders.

"The book offers a framework to aid leaders and congregations in making disciples in all nations & among all people groups not with just words but with their actions as well. John and Anthony outline, in tangible terms, a spiritual formation to help the next generation become “gospel activists”. They encourage a pursuit of a holistic approach to bring about the transformation of a cynical generation who wants real reconciliation in a divided world.

Commissioned to Love is the kind of book that promotes excellent missiology, systematic reflection and discipleship making. It calls to all, but especially the next generation to proclaim the gospel of Jesus Christ.”

John P. Perkins is the Lead Pastor of Common Ground Covenant Church, a multi-ethnic missional church in Jackson, MS. John developed his vision for Common Ground while serving as the President and CEO of the Spencer Perkins Center and John and Vera Mae Perkins Foundation, a Christian non-profit that focused on youth and community development in the heart of West Jackson. “My heart bleeds for the fathers and families in our West Jackson community.” His commitment to meeting the “holistic’ needs of his neighbors in West Jackson, where John lives with his bride, Patrice of 12 years and 3 children, John-John(10), Sarah(8) and Johnathan(4). His family, whom John refers to as his “first flock,” works together in hopes of undergirding Common Ground’s mission of Christian Community Development.

Prior to his time in ministry John served as the Executive Chef/Conference Services Manager for Valley Food Services at Eagle Ridge Conference Center in Raymond, MS. It was there while feeding people that he felt a new calling through the message as conveyed through the Gospel of John to “Feed my sheep.” Jesus’ command to Peter moved John to not only meet people’s physical need, but to meet the spiritual and emotional needs as well.

Pastor John’s heart for community and economic development has led Common Ground in efforts to blend church and community by engaging in partnerships with local business, schools, and churches in urban West Jackson. Recognizing, while shepherding, the most felt need for many of his congregation was jobs led to establishing Common Ground Enterprises which currently has a catering business, lawn care service, and barbershop & beauty salon. John has recently developed, Common Ground Community Development Corporation which will focus on education, work-force development, and housing. “We will continue finding and creating resources, so that Common Ground can continue to take the holistic Gospel message to the under-served people of our urban West Jackson and the rest of the world” The vision for Common Ground CDC is to affect change in people’s hearts so they can create communities which reflect the Kingdom of God. As a representative of the next generation of Christian leaders he is excited to further this work of Christian Community Development.

You have subscribed to alerts for John P. Perkins.

You have been added to John P. Perkins's favorite list.

You can also sign-up to receive email notifications whenever John P. Perkins releases a new book.