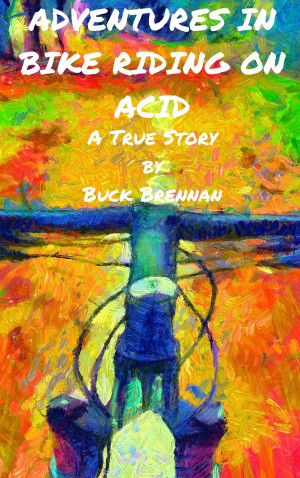 Adventures in Bike Riding on Acid

Buck Brennan is best known for being late for work, gross farts, and yelling at his kids in Wal-Mart. He also has an uncanny ability to drink incredible amounts of beer. Once, back in 2009, he drank over 30 beers at a family reunion. Everyone was so impressed with this awesome feat of beer drinking that they picked him up off the picnic table he was passed out on and carried him home on their shoulders like a true champion of life. Buck’s beer-drinking prowess has since grown in stature, solidifying his place in history as a true virtuoso in the art of getting shit-faced drunk.

By the time Buck was 25, he needed to find a Goddamn job and move the fuck out so he could start paying for his own goddamn bills already. At least that is what his parents were always telling him. What his parents didn’t understand was that he was a Psychology major, and Psychology majors don’t get good jobs or move out of their parents’ house. With a shitty college major, and not enough charm or good looks to enter the lucrative world of pharma sales like his mom and dad wanted him to, Buck did the only thing he could to make money. He became a high school guidance counselor. Buck has never won any awards for his writing, but he has won many participation awards over the years and countless drinking games in college. Currently, Buck lives in rural PA with his dog, his cat, and his two children 50% of the time. In his free time, he enjoys looking for the remote, complaining about stuff, and fighting with his ex-wife.

You have subscribed to alerts for Buck Brennan.

You have been added to Buck Brennan's favorite list.

You can also sign-up to receive email notifications whenever Buck Brennan releases a new book.