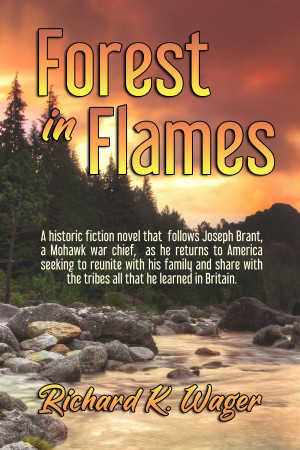 Forest in Flames, a historical fiction novel, follows Joseph as he returns to America seeking to reunite with his family and share with the tribes all that he learned in Britain. Join Joseph as he experiences the joys and sadness of finding a place for his people in their dramatically changing new world, and in the battle to create a nation.

Richard K. Wager was born and raised in Hyde Park, New York and continues to live there today! Dick resides with Ellen, his wife of 51 years, and their dog, Missy, on the banks of the Hudson River. Dick and Ellen have four grown children and seven grandchildren ranging in age from 18 down to 2. Dick is a poet, an avid golfer, a lover of all things nature, and devoted to the preservation of Dutchess County’s local history. He especially enjoys watching the wildlife that calls the Hudson Valley home from his back porch, including deer, red foxes, and this year, a pair of nesting eagles.

Dick graduated from St. Lawrence University in 1960 and then served two years in the United States Army. Dick was Airborne qualified and stationed for a good part of his service in South Korea.
Upon leaving the service, Dick joined the Poughkeepsie Journal Newspaper staff as a copy editor, and over a forty-year career worked as a reporter, editor, managing editor, and publisher, before retiring as Regional Vice President of Gannett East in 2004.
Public Service

Dick served on the board of trustees for St. Francis Hospital, Marist College and the Dutchess County Fair. Dick was instrumental in founding Hudson River Housing, and to establishing The Gannett House, a residence for homeless people in Duchess County. He was also an advisor to the Governor on the Greenway legislation for the Hudson Valley and served on the Greenway Conservancy. In 1988 he received the Eleanor Roosevelt Val-Kill Medal for his work with the underprivileged and for his special interest in environmental protection. In 1991 he was presented with the B’nai B’rith Americanism Award for his community service. Dick has served as President and chairman of the legislative committee for the New York State Publishers Association and as chairman of the New York State Publishers Foundation for public service.

You have subscribed to alerts for Richard K. Wager.

You have been added to Richard K. Wager's favorite list.

You can also sign-up to receive email notifications whenever Richard K. Wager releases a new book.