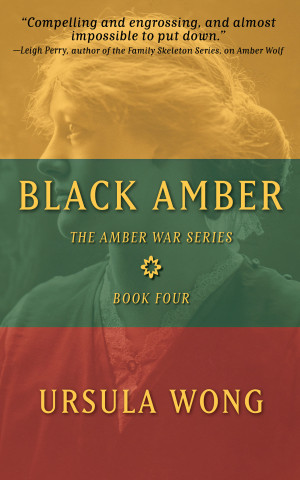 By Ursula Wong
In Book Four of the Amber War series, Baltic Sea pipelines have made Europe dependent on Russian gas, but Russian petro-bullying threatens to render NATO ineffective and worse. As cyberterrorists plot to destroy the pipeline, members of Lithuanian think-tank Baltic Watch must decide whether to support them and let Europe fall into darkness, or expose them and risk retaliation that may lead to war. More
How do you choose between fuel and freedom?

President Vera Koslova of Russia seeks to return Russia back to a superpower using oil and gas revenues. Neighboring countries fear Russia will use her energy supply to exert political influence. Even the Americans are nervous. But Koslova’s subsea natural gas pipeline is saving Europe from its worst energy crisis in decades.

Then the gas stops flowing—cyberterrorism. Koslova’s enemies claim she ordered it to show power and control, but Lithuanian journalist Lena Markus discovers the truth. Revealing it may drive Koslova to war. Saying nothing may plunge Europe into darkness.

Ursula Wong writes gripping stories about strong women who struggle against impossible odds to achieve their dreams. Her work has appeared in Everyday Fiction, Spinetingler Magazine, Mystery Reader’s Journal, and the Insanity Tales anthologies. She is a professional speaker appearing regularly on TV and radio.

For more information about Ursula and her books, visit her website at http://ursulawong.wordpress.com.

You have subscribed to Smashwords Alerts new release notifications for Ursula Wong.

You have been added to Ursula Wong's favorite list.

You can also sign-up to receive email notifications whenever Ursula Wong releases a new book.