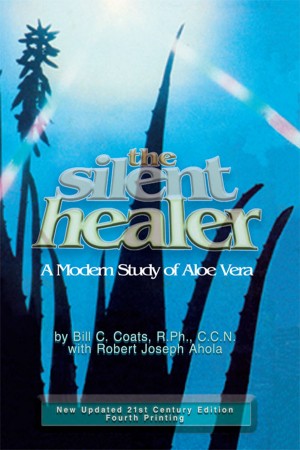 The Silent Healer — A Modern Study of Aloe Vera

By Bill Coats
For more than thirty years, The Silent Healer has been the definitive sourcebook on Aloe Vera in the world. Truly an encyclopedic work sponsored and co-authored by the father of practical Aloe technology, Bill Coats, this “Modern Study of Aloe Vera” has now been re-released with new material in every chapter. The perfect reference for layperson and professional alike.

Bill C. Coats, R.Ph., C.C.N. is one of the world's foremost experts on Aloe Vera and is the founder and CEO of Coats Aloe International. In his capacity as lecturer, teacher and world authority on the healing plant, he often tours and lectures annual in several countries, including Taiwan, Hong Kong, Australia, Indonesia, Malaysia, Japan, Spain, Portugal, Mexico and Canada. Nominated by the Society of Cosmetic Chemists three times for its prestigious Merit Award, he has also co-authored five books on Aloe Vera, including "Aloe Vera/The Inside Story," "Creatures in Our Care," and "ALOE VERA/The New Millennium.

Robert Joseph Ahola is a writer, producer and director who lives in Malibu, California. As CEO of Galahad Films, he has written and produced over 300 films, videos and documentaries for television, satellite, and independent theatrical release. He is the author of ten published plays, including "The Year of the Tiger," "Judas Agonistes," "The Last Othello," and "The Decline and Fall of Us All," and he has authored or coauthored 14 published books, including "I Dragon," "The Return of the Hummingbird Wizard" and "Delusion is Good." This fourth edition of "The Silent Healer" is his fifth collaboration with Bill Coats.

You have subscribed to alerts for Bill Coats.

You have been added to Bill Coats's favorite list.

You can also sign-up to receive email notifications whenever Bill Coats releases a new book.