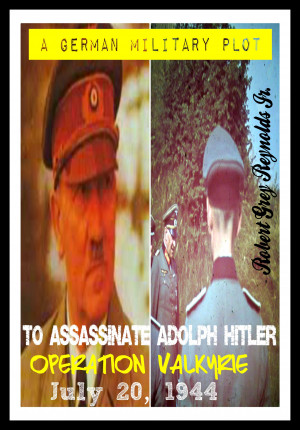 By Robert Grey Reynolds, Jr
On Wednesday, July 26, 1944, German radio broadcast the names of the conspirators who planned the aborted assassination attempt on Adolph Hitler. The plan was carried out as Operation Valkyrie on July 20, 1944. Hitler had only just finished his meeting with Fascist dictator Benito Mussolini. The most prominent conspirator was Claus von Stauffenberg. The bomb detonated 24 hours after the meeting. More
On July 20, 1944 Operation Valkyrie was designed to assassinate Nazi dictator Adolph Hitler with a bomb. The plotters intended on killing him while he was meeting with Italian leader Benito Mussolini. Unfortunately, for the conspirators, their scheme ran into delays. The conspiracy's origins began in 1938, with Nazi Germany's forced annexation of Czechoslovakia and Austria. My e-book looks at the careers of the conspirators, and how their opposition to Hitler began. It also describes their military service on the Eastern and Western fronts during World War II.