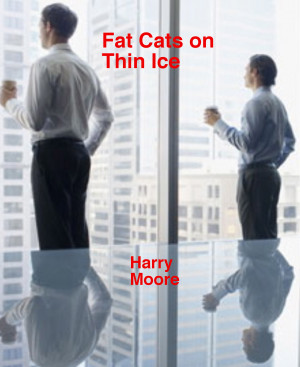 By Harry Moore
Fourth novel by Harry Moore focuses on the professional sector. This is an insight into the world of accountants, lawyers and bankers in a story of survival at the height of a recession in the UK. Likely to surprise, may even shock! In a backscratching world small businesses are sacrificed for fees. More
In his new novel Harry Moore removes the lid off the professional sector, banks and business support agencies. This is not the ‘ivory tower’ world of high finance in the city but the story of business at grass roots level.

Follow Gerard Fox of Carter Brown, the ambitious young insolvency practitioner, as he advises small businesses in a quest to generate maximum fees but still looking for that one big appointment that will make his career. He works with other professionals, banks and lenders who feed off each. Rob Little, the corporate finance accountant, Paul Koniva, the lawyer and Stephen Booth, the bank manager responsible for companies in financial difficulty. They are joined by John Massey of the Business Support Agency, who manages to ensure that government targets are met and businesses believe they are getting real value for money.

In the meantime the directors of Peveril Products are concerned. The company finance director, Charles Gopher, contacts his lawyer for insolvency advice only to find he has embraced a network of professional advisers who pass the information around resulting in the bank withdrawing their support. Tony Taunton, a management consultant turns up. Could he be the man to really help the business or does he have his own agenda?

Beneath the corporate activity Gerard has problems with his flirtatious wife, who likes a good time and a drink or two resulting in a catastrophe that could jeapordise Gerard's career. Things worsen when she meets up with the Tony who, as well as working at her firm is determined to keep Gerard out of Peveril. Eventually the two clash head on.

Charles and the owner of Peveril Products, Victoria Slawston, work their way through the morass of advice but will they survive?

The novel is a commentary on the way the various professional firms, business advisers, banks and lenders work, recognizing there is good and bad in all, but questions where loyalties lie..

Harry Moore has worked for two of the top international accountancy firms, the UK government's business advisory service and has been director of several businesses.

Harry is a business turnaround director, a published author and founder of a number of charities.

As well as being a Principal Consultant and team leader with two major Consultancy firms he has held senior board level appointments in a number of companies.

He founded the Rainbows Children’s Hospice, The Laura Centre, a bereavement counseling service for those affected by the death of a child and children affected by death and COPE, the children’s cancer charity. He is a published author and has received an honorary doctorate from the University of Loughborough as well as two Beacon Fellowship Awards.

You have subscribed to alerts for Harry Moore.

You have been added to Harry Moore's favorite list.

You can also sign-up to receive email notifications whenever Harry Moore releases a new book.