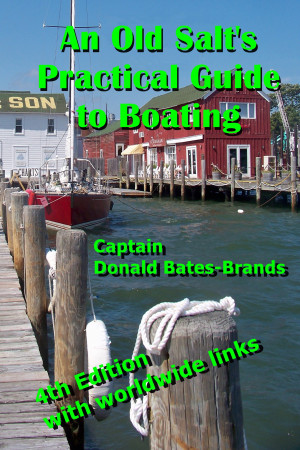 By Donald Bates-Brands
Rated 5.00/5 based on 1 reviews
A basic boating guide, told in a salty tale format. Emphasis is on the practical and not on calculations and theory that the average boater doesn't need. The author has over 40 years of experience on the water as a pleasure boater, Coast Guardsman and commercial tug captain. This is an easy reading and entertaining way to become a proficient boater. More
Within these pages is the real meat of core information that you need to be a safe and competent boater. It’s presented in an easy reading salty tale format. I’d like to think that this book will offer the pleasure boater a unique perspective on his sport.
After spending over forty years with boats and ships of all kinds, I feel that traditional boating texts are too dry, long and hard to read. I’ve been across the North and South Atlantic Oceans with the USCG and worked commercial tugboats from Canada to Texas. All the while, I’ve been active with pleasure boats. This includes participating in OpSail 76 with a Chesapeake Skipjack and sailing the South of England with a British friend.
Each different class of marine interest has a different way of doing and looking at things. I have married a combination of these approaches as my own method of approaching the sea. It’s a practical and non-theoretical approach. There are no cumbersome calculations that you’ll never bother with here. You will find suggestions that are doable for real life situations that you’ll see in day-to-day pleasure boating. Many of my methods will be shorter and easier than “conventional wisdom”. At other times, I may go into more detail on a topic than you are used to. There’s method to my madness, this information will help you. Whether conventional or not my advice is based on sound sea-sense and years of experience. So get comfortable, sit back and let’s go armchair sailing.

Boats and the sea have been my life. I think I was about eight years old when I got my first boat, a dilapidated canoe. A few years later I graduated to a healthier canoe with a lateen sailing rig. This was my first sailboat. I capsized it a lot, but had thoroughly caught the boating bug. I started racing sailboats by the age of 12.
In 1968 I joined the Coast Guard at the age of 17 and was discharged in 1975 with the grade of First Class Quartermaster. My first tour in the Coast Guard was an oceanographic trip to Africa on the CGC Rockaway. It was a three month tour with most of the time at sea, but it was my first adventure out of the country and I loved it. My second oceanographic tour on this ship took me to the Barbados, Trinidad, the Bahamas, and Puerto Rico. Later in this hitch I was transferred to the CGC Lilac, a triple expansion steam buoy tender, a fugitive from museums built in the early Thirty’s. I believe it is now being refurbished in NY City for display in the near future. I returned to the CGC Rockaway to finish my first hitch and made a Cadet cruise to England.
Discharged from the Coast Guard on Oct 22, 1971, I returned to England for a 3 month tour by bicycle. In January of 1972 I rejoined the CG and reported aboard the buoy tender CGC Firebush at Governors Island NY. In the summer of 1972, I took leave from the CGC Firebush and enjoyed a two week cruise along the south coast of England with a British friend on his 27’ Trident class sloop. This was a bilge keel rig that proved to be fairly important in an area with 30 foot tides. Many times at low tide we were aground, but vertical resting on the two keels.
After returning stateside to the CGC Firebush, the wanderlust hit me again and I requested and received a transfer to the CGC Gallatin which was making a cadet cruise through Europe. On this trip I got to Gibraltar, Portugal, Germany, Denmark and England. In 1974 I bought the Chesapeake Skipjack "Pale Moon" and sailed it from Maryland's Eastern Shore to NY for Opsail '76. Throughout this period I was involved in one design racing.
Since my discharge from the Coast Guard in January of 1975, I have been working on large seagoing tugboats and currently hold a 1600 ton Ocean Master's License as well as Unlimited Third Mate and an Unlimited Radar Observer endorsement. I have written extensively on marine safety for Offshore Magazine and other publications. I have now retired from going to see and am pursuing my writing full time. On my free time, I enjoy cruising with my wife on our Catalina 22 on Long Island NY's Great South Bay.

You have subscribed to alerts for Donald Bates-Brands.

You have been added to Donald Bates-Brands's favorite list.

You can also sign-up to receive email notifications whenever Donald Bates-Brands releases a new book.