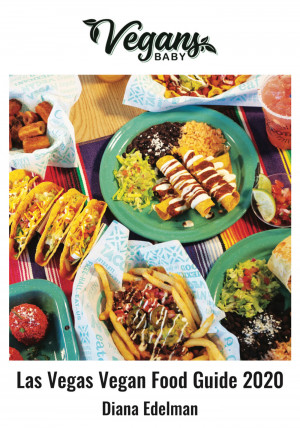 By Diana Edelman
Discover the best vegan dining in Las Vegas -- from the Strip to the suburbs -- with this comprehensive guide from the leading vegan authority in Las Vegas. More
Discover the best vegan dining in Las Vegas! Vegans, Baby’s Diana Edelman guides you through the city’s most spectacular vegan eats in the fourth edition of the Las Vegas Vegan Food Guide. From best Asian food to best Thai … and everything in between, the Las Vegas Vegan Food Guide features more than 40 dining categories and a whopping 100-plus suggestions for you to taste some of the finest vegan food in town! Find out what to order at the best spots around Las Vegas, and learn more about every vegan restaurant in Las Vegas in the special bonus section. Vegans, Baby has even made it easy to explore where every restaurant in the book is with a special map This is your ultimate guide to the best vegan eats in Las Vegas!

Diana Edelman is the voice behind Vegans, Baby, a multi-faceted endeavor with a focus on dining that is dedicated to making vegan life approachable and easier in Las Vegas and beyond.

Founded in 2016, Edelman and Vegans, Baby have gained international recognition for serving as a catalyst for the explosive growth of the vegan dining scene in Las Vegas. In 2019, she partnered with the prestigious James Beard Foundation to curate vegan dinners featuring Las Vegas chefs at the famous James Beard House in New York City and showcase the talent in plant-based cuisine in Las Vegas. She also curated The Farm Stand, the first all-vegan culinary experience at the three-day Life Is Beautiful festival in Downtown Las Vegas.

Through her work with Vegans, Baby, Edelman launched a successful vegan dining month -- Veganuary Las Vegas -- held every January that benefits local organizations and the international Veganuary organization. She also runs vegan tours in Las Vegas, Asia and Europe. Her Downtown Las Vegas tour was named as one of the top nine vegan tours in the world by Travel + Leisure in October 2019.

A public speaker, Edelman has traveled around the world speaking about responsible elephant tourism (she spent nearly three years in elephant rescue in Thailand), how to be a leader for change using positive messaging and her experience as a female entrepreneur. She’s spoken at renowned events including SEED Summit in Miami and the Toronto Vegetarian Festival.

You have subscribed to alerts for Diana Edelman.

You have been added to Diana Edelman's favorite list.

You can also sign-up to receive email notifications whenever Diana Edelman releases a new book.