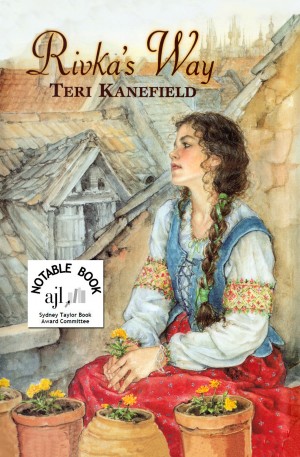 By Teri Kanefield
Originally published in hardcover by Cricket Books (2001)
Unsure about her upcoming marriage and eager to see what lies beyond the walls of Prague’s Jewish quarter in 1778, fifteen-year-old Rivka takes great risks to venture outside. What she discovers forever changes her views of her family and herself. “A rewarding read for the romantically inclined,” School Library Journal. More
Originally published in hardcover in 2001 by Cricket / Front Street Books.

Fifteen-year-old Rivka Liebermann has never been beyond the walls of Prague’s Jewish quarter. Inspired by her brother Jakob’s stories of the outside world, Rivka longs to explore the larger city and surrounding countryside. It’s impossible for a girl to leave the quarter on her own, and her parents would think such an excursion frivolous. But what if she dressed as a Gentile boy? Did she dare embark on such a risky adventure?

Once the plan enters her head, Rivka can’t turn back. What she experiences outside the quarter forever changes her ideas of her family and herself.

Set in eighteenth-century Prague, this engaging story chronicles one girl’s struggle to come to terms with her place in the world.

Named a Notable Book of 2001 by the Association of American Jewish Libraries.

“. . . the details of daily life are completely convincing, the foreign setting is made familiar, and Rivka's character rings true. A rewarding read for the romantically inclined.”
Kathleen Isaacs, School Library Journal


“ . . . when Rivka befriends a man who is unjustly thrown into debtor's jail with no recourse, she is faced with a hard decision, to risk leaving the ghetto again or to abandon this man to a grim fate. Her choice creates an uproar and deeply changes Rivka's view of her world.”
Lilith Magazine

“. . . . .. readers will be pleased to find another character who shares Rivka's deep sense of justice.”
Kay Weisman, Booklist

“. . .The first-time author draws a convincing portrait of a warm close Jewish community confronted by prejudice, as she tells about a young girl’s struggle to accept her role in this society. The risks involved in Rivka’s ventures outside impart suspense to the story. This well-told tale will appeal to fans of both historical fiction and spunky female protagonists.”
Paula Rohrlick, Kliatt, Review of Selected Books

Teri writes novels, short stories, essays, stories for children, and nonfiction for both children and adults.

Her children's books include The Girl From the Tar Paper School and Guilty? Crime, Punishment, and the Changing Face Justice. Both books were Junior Library Guild Selections. The Girl From The Tar Paper School was a California Reading Association Silver Honor book and was included in the New York Public Library's 100 children's books to read in 2014. Her first novel, Rivka's Way, was a Sydney Taylor Awards Notable Book.

Her stories and essays have appeared in publications as diverse as Education Week, Scope Magazine, The Iowa Review, The American Literary Review, and Cricket Magazine.

Teri lives in California by the beach.

Teri's books have received the following honors and distinctions:

You have subscribed to alerts for Teri Kanefield.

You have been added to Teri Kanefield's favorite list.

You can also sign-up to receive email notifications whenever Teri Kanefield releases a new book.