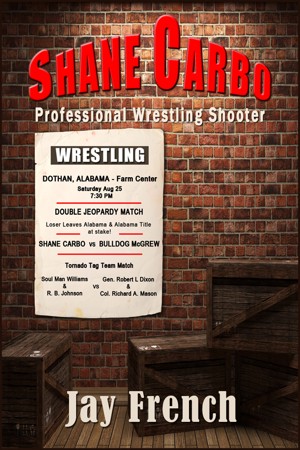 By Jay French
SHANE CARBO takes you along on his journey from pro wrestling wannabe to main eventer during the territory days of the 70’s. He had to shoot wrestle his way into the biz and had to shoot to survive at times. Along the way he experiences locker room politics, groupies, blading, girlfriends, opposition promoters and even success. Shane’s exploits will surprise and entertain smart wrestling fans. More
SHANE CARBO takes you along on his journey beginning with the setbacks of trying to achieve entry into the secretive fraternity-like business of pro wrestling through the early days of wrestling in small towns in the south to catching his first break and headlining, to becoming a polished main event wrestler. Along the way SHANE CARBO encounters both real life and in the ring adventures that educate and mold him. Shane takes us on the inside when it comes to pro wrestling front office and backstage politics, life in the pro wrestling territory days, opposition promoters, groupies, kayfabe traditions, beer and blood galore, balancing girl friends with demanding travel schedules, and shoot wrestling matches you’ve never imagined.

SHANE CARBO is not your traditional 1978 pro wrestler. His titled amateur wrestling background, dedication to training and to the sport of wrestling provided him with a physical appearance superior to the beer belly performers of the era. His believability both in the ring and on the mic endears him to the fans. His background and ability to shoot wrestle not only got him in the door when others failed but allowed him to compete in the toughest shoot encounters.

Welcome to Shane Carbo’s world of pro wrestling. He relishes every minute of it and so will you.

“There is nothing more exciting to a real wrestling fan than creative storylines that engage, evolve and entertain. That is my goal with this book,” Jay French explained. “I believe this first book is ideal for any wrestling fan interested in the process of getting into the wrestling biz during the famous territory era and what happened after.”

Television viewing numbers and attendance at live pro wrestling events are well below the peak of a decade ago. Those numbers continue to decline today as smart wrestling fans increasingly complain about the lack of original creative product and poorly developed story lines that fail to portray reality and too frequently fail to provide attention to detail. This Shane Carbo book is ultra relevant during these times as it delivers an original alternative for wrestling fans with well thought out matches and feuds that readers don’t see coming, and the added bonus of insight into an exciting era that might be unfamiliar to some readers.

I became hooked on professional wrestling at a young age and began going to the weekly matches in Miami Beach Auditorium when attendance was measured in the hundreds. I watched Championship Wrestling From Florida grow steadily under the vision of Eddie Graham until it morphed into weekly sell outs across the state. During that era of nonstop upward growth I observed the product transform from simple stories and lots of punches and stomps to believable promos focused on competing and winning titles, and an in ring product that featured “wrestling” like I never saw before of after.

This was the style that I tried to emulate during my career. Yes, I did wrestle professionally and loved it. I went on to promote Central States Wrestling with the legendary former NWA president Bob Geigel.

The business of pro wrestling is one you can never fully escape once it hooks you. That might be one of the reasons I created SHANE CARBO, Professional Wrestling Shooter. The series of fictional books I authored about SHANE CARBO and his life in professional wrestling take you from his early days as a fan all through his career, how ever long that lasts. And that is entirely up to you the readers.

Today, in addition to writing more SHANE CARBO books, I own Ultimate Cruise & Vacation in the Kansas City area with my wife Carol, and plan fabulous all-inclusive vacations for our valued clients along side our son Justin. And I still follow pro wrestling.

You have subscribed to alerts for Jay French.

You have been added to Jay French's favorite list.

You can also sign-up to receive email notifications whenever Jay French releases a new book.