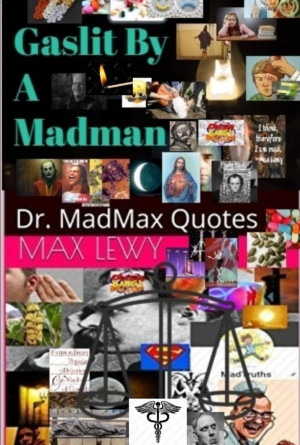 Gaslit By A Madman: Dr. MadMax Quotes (part I)

It is based on the author, Max J. Lewy’s, own experience as an oh-so-patient patient in the N.H.S. Mental Health System. Veritably knocked off his horse by two out-of-control, gaslighting shrinks at the tender age of 23, his writings trace his recovery from this life-changing, iatrogenic incident over the next 12 or so years, exploring the ‘mad’ identity that was placed upon him and the truly insane, or certainly very flawed and eye-brow raising System which so unfortunately often does such things to quite healthy and relatively rational people. This companion volume, released for his 36th anniversary year as a little gift (for "The Beast", presumably... but who knows, maybe Lucifer, maybe Jesus, maybe the old bearded madman at the end of the street with an "The Apocalypse Is Nigh" cardboard sign hung to the back of his bike.), contains 99 pages, mostly of psycho-delic, mischievous Loki-like quotes, both from the “Mad Dr.” himself, & from the world's greatest, most historic & popular sages & authors.

Max J. Lewy (1983-) was born in the ex-coal-mining area of the South Wales valleys, U.K. to a Jewish father and English mother, and is now a recovering patient of Mental Health System abuses. He studied Philosophy at Warwick University, undergoing a spiritual transition and potential breakthrough which was aborted and derailed by misplaced 'treatment'. He spent 6 months living on the street as a runaway from NHS 'services' in Brighton. He self-published his first book of poetry, "Madness: a form of love" last year, detailing his ordeals as a form of therapy (#PoetryNotPills #MeditationNotSedation) and defence, and is the winner of RealisticPoetry's 2018 "Perspectives Of Love" Poetry Contest for the poem "River Of Eternity (For R. W.)". While currently spending his time writing poetry and philosophy about Mental Health, he is also considering retraining to work in the field of Artificial Intelligence (although, as he says himself, his intelligence is already highly artificial!). In his spare time, he plays tennis, drinks pure cacao sweetened with Manuka Honey, a long with various other herbal remedies and holistic health rituals, and avoids doctors at all costs.

You have subscribed to alerts for Max Lewy.

You have been added to Max Lewy's favorite list.

You can also sign-up to receive email notifications whenever Max Lewy releases a new book.