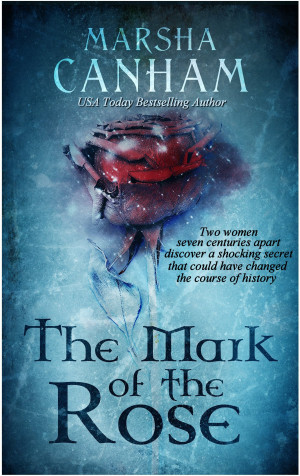 The Mark of the Rose

By Marsha Canham
The lives of two women, seven centuries apart, come together in a thrilling adventure set in the forests and castles where the legend of Robin Hood began. This is the fourth book in the award-winning medieval series which begins with Through A Dark Mist, In the Shadow of Midnight, and The Last Arrow. More
The Mark of the Rose has been sitting at the back of this author's mind for twenty years. It is the story of two women, one a contemporary working girl holding down two jobs to pay the rent who finds out she is the sole heir to a vast English estate, including a manor house, an ancient castle, and a few hundred million dollars.

Enndolynn Ware has been disguised as Ellyn the Fletcher since her mother was burned at the stake for being a witch. She has been captured by the Sheriff of Nottingham who intends to send her south with one of King Edward's most feared henchmen. His plans are foiled by Rennwick de Beauvoir and his three companions who have very different orders concerning the young witch. Adventure, romance, ghostly visions and knights in armor. Who can resist?
Available ebook formats: epub mobi pdf lrf pdb txt html
First 10% Sample: epub mobi (Kindle) lrf more Online Reader
pdb
Price: $4.99 USD
Buy Add to Library Give as a Gift
How gifting works
Create Widget
Tags: ghosts fantasy historical romance robin hood medieval romance adventure romance knights and damsels
About Marsha Canham

Author of 20 Historical Romances and one contemp, my first book, China Rose, was published in 1984. Since then my historical romances have consistently appear on the USA Today list. I have been honored to be the recipient of multiple awards from Romantic Times, including 2 Lifetime Achievement awards, Storyteller of the Year, Medieval of the Year, Swashbuckler of the Year, as well as having been awarded one of a very few five star reviews handed out by Kathe Robin for The Blood of Roses. The Iron Rose was also named as one of the seven best Fiction books of the year by Publishers Weekly.

You have subscribed to alerts for Marsha Canham.