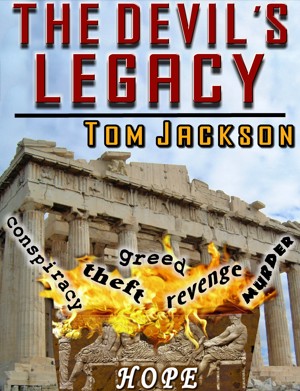 By Tom Jackson
Rated 5.00/5 based on 4 reviews
The opening of Pandora’s Box creates pandemonium in the office of the British Prime Minister. A team is assembled to solve a two hundred year old conspiracy in order to prevent the Box’s incredible secrets from being revealed to the world and plunging British society into chaos. Will the search for truth be successful? And will it result in the restoration of a country’s stolen heritage? More
Natalie Sinclair is swept out of her mundane lawyer’s existence in London and catapulted into the adventure of her life-time in Greece, and all because of the contents of the mysterious Pandora’s Box hidden deep in the vaults of the British Museum.

She and her team of archaeological experts and secret service agents must solve a two-hundred year old mystery at the heart of which is the most famous of Greek artefacts – The Parthenon Marbles – while Natalie must come to terms with horrifying truths and battle her own demons! What makes Natalie Logothetis Sinclair so special to the British Government? Can her team decipher the clues in their odyssey back through the centuries? Can they unearth the bizarre secrets of the past? Do they really want to?

Success must be achieved against an intensifying background of treason, competition from an American billionaire collector, and the intervention of the Greek mafia.

Success is the only option. Failure would bring with it devastating revelations threatening the very fabric of British society.

Reviews of The Devil's Legacy by Tom Jackson

Was a great read and fast paced story. Overall the author did a great job.

This is hands down the most creative book that I've ever read. Only this book could take the Pandora's box, the Titanic, Jack the Ripper, Sherlock Holmes, World Wars, Napoleon, the mafia, and multiple countries and tie them all up together in a way that makes perfect sense and makes you question quite a lot about the world all at the same time. It was incredible! It was full of surprises too which kept things fresh. It helped that I was a history lover before I read this because I could fall back on what knowledge I already had. That made the book seem more real, more plausible. The little tidbits of love interest on the side really helped too.

I also really liked how the novel was laid out. It is done with flashbacks but they don't just come randomly. Every time the characters get another piece of information there is a flashback that explains it. That was a really good way to work it out.

It ended well. Everything was tied up and it was made to still make complete sense. It was a very good ending with surprise twists.

P.S. You really need to focus to read this book. It gets pretty complicated and it's a very intricate web. It's worth the work though so don't worry.

(reviewed the day of purchase)
Donna Lawrence reviewed on Jan. 18, 2012

A wonderful story! This book is full of 'what ifs' and 'maybes'. Imagine what would happen today if the Elgin Marbles are discovered to be fakes? The real marbles having been stolen over 200 yrs ago. A "Pandora's Box" exists with information about the true marbles and the theft. Everyone is involved from the monarchy to the Prime Minister and museum director.

This books goes back and forth between multiple times in history to explain the story of the marbles. The book involves a colorful cast of characters from Napoleon to Winston Churchill to Queen Victoria.

The legendary Parthenon Marbles from the British museum is going to be returned back to Greece in another six months..or so the British Prime Minister has given word to the media. But, the Marbles, that the British possesses are fake and there is a secret "Pandora's Box", which contains a clue of the theft, that was committed two hundred years ago. The British has two options now: Come clean to the public with the news and face the consequences; or find the Marbles that was lost two hundred years ago in six months time.

The British goes with the second option and a team comprising the experts in various fields with one female lawyer as lead is formed. The team's job is to find the marbles within six months without anyone else knowing about it. But as soon as they began their search, their secrecy is leaked and they are being followed everywhere by collectors and gangsters.

In spite of all the hopelessness, the team starts with their research to find the Marbles and the real adventure begins.

To say, I am not good in historical facts, will be an understatement. But, this book had me stunned by all the events, that 'might have' occurred in history, as a result of deception and greed. Many historical places, persons and other references in the book are new to me, but I absolutely enjoyed knowing about them all.

Tom Jackson is a debut author and I have not read much of historical fiction. So, I started reading this book without any expectations. But, this book would have, anyway, exceeded all the expectations, if I have set any. The author had done an amazing job on bringing all the events in accurate detail. The novel is told in many different times of history and I can just tell how difficult it would be to bring them all in a page, without any confusions. There must be a massive research for writing this book and as always, I wish I had known the details.

You have subscribed to alerts for Tom Jackson.

You have been added to Tom Jackson's favorite list.

You can also sign-up to receive email notifications whenever Tom Jackson releases a new book.