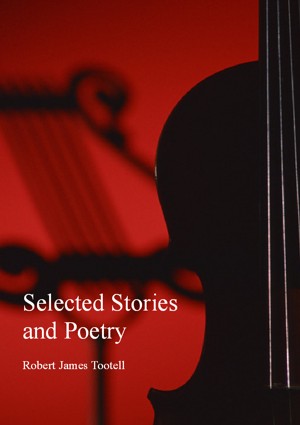 By Robert James Tootell
This is a collection of stories and poetry taken from various other publications in paperback and ebook forms.

Here is a quick list of my literary efforts so far:

I'm currently studying for an MA in Scriptwriting at Glamorgan University, and recommend it for anyone and everyone who is interested in learning this craft - it's a brilliant course with brilliant tutors.

Back to me! Here are some of my favourite stories and books:

The Three Lilies by Jan Neruda;
In a Far Distant Land, Light Breathing, In Paris, et al, by Ivan Bunin;
The Bishop, The Artist's Story, Rothchild's Fiddle, by Anton Chekhov;
Red Cavalry, The Tales of Odessa, by Isaac Babel;
Too Loud a Solitude by Bohumil Hrabal;
Gimpel the Fool, The Cabalist of East Broadway, by IB Singer;
Klingsor's Last Summer by Hermann Hesse.

Dark Avenues by Ivan Bunin;
The Alexandria Quartet by Lawrence Durrell;
The Colossus of Maroussi by Henry Miller;
Goodbye to All That by Robert Graves;
The Radetsky March by Joseph Roth;
The Red and the Black by Stendhal;
The Baron in the Trees by Italo Calvino;
War and Peace by Lev Tolstoy;
The Drowned and the Saved, Moments of Reprieve, by Primo Levi.

Currently living in France and writing for radio.

You have subscribed to alerts for Robert James Tootell.

You have been added to Robert James Tootell's favorite list.

You can also sign-up to receive email notifications whenever Robert James Tootell releases a new book.