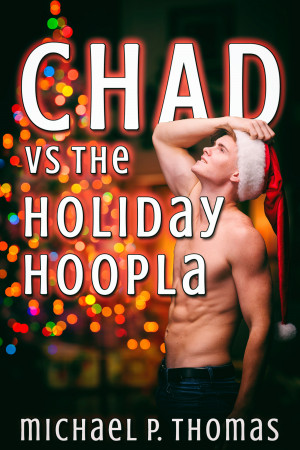 Chad vs. the Holiday Hoopla

By Michael P. Thomas
Chad would never have come alone had he known Dr F’s party revolved around a scavenger hunt that’s strictly duos-only. Worse, his hunky doctor crush is spoken for, and Chad winds up with the doofus with his elbow in the punch bowl as a partner. But Jarek’s full of surprises, and even as their prospects as prize-winners dwindle, Chad wonders if losing alongside him might not be its own kind of win. More
If Chad is reticent to drop in on Dr. Fortescue's big annual holiday bash without a date, imagine his horror when he arrives to discover the party revolves around a city-wide scavenger hunt with a two-to-a-team policy stricter than Noah’s. Worse, his efforts to pair up with his hunky doctor crush are thwarted, and he winds up being assigned the doofus with an elbow in the punch bowl as a partner.

It turns out scavenger hunts are hard -- were they really supposed to dognap the doctor's neighbor's dachshund and carry it around the mall all night? But running around with Jarek is easy. And kinda fun.

Even with help from an unsuspecting celebrity and Santa’s sexiest elf, it’s starting to look like a participation trophy might be the best they can hope for prize-wise, but Chad starts to wonder if losing alongside Jarek might not be its own kind of win.

First 20% Sample: epub mobi (Kindle) lrf more Online Reader
pdb
Price: $2.99
$2.09 USD
Buy with coupon Use the code AGB30 at checkout for 30% off during our site-wide promotion!
(Offer good through April 20, 2020 )
Have a better coupon?
Add to cart, then apply your coupon
Add to Library Give as a Gift
How gifting works
Create Widget
Tags: gay

You have subscribed to alerts for Michael P. Thomas.

You have been added to Michael P. Thomas's favorite list.

You can also sign-up to receive email notifications whenever Michael P. Thomas releases a new book.