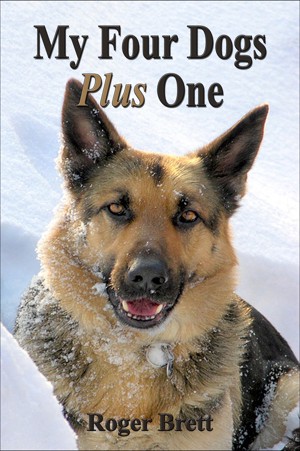 My Four Dogs plus One

Roger Brett was born in 1943 in Ruabon, North Wales. He attended The Kings School Chester, University College, London, and Salford University. He was commissioned into The Royal Electrical and Mechanical Engineers as a Second Lieutenant in 1968, and left, after taking early retirement, as a Major in 1988. Since then he has had a varied career in self- employment. He moved to a secluded villa in the hills above Malaga in 2015 where he now lives in total retirement with his wife Audrey and his beloved dog Amber
He can be contacted at fantasygdn@gmail.com or on 0034 951 189 031.

A delightful story of one mans' love for his dogs.

(reviewed 30 days after purchase)
Gio Compario reviewed on Nov. 1, 2011
(no rating)
Gio Compario from Gocompare.com says: I do love German Shepard dogs and it makes me so happy that Sheba enjoys my adverts. When it comes to pet insurance, you really should Go compare ;-{)

You have subscribed to alerts for Roger Brett.

You have been added to Roger Brett's favorite list.

You can also sign-up to receive email notifications whenever Roger Brett releases a new book.