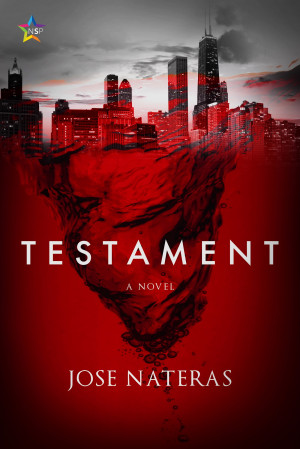 By Jose Nateras
If he can escape from his own ghosts, he can break free from those around him too. More
Gabe Espinosa, is trying to dig himself out of the darkness. Struggling with the emotional fallout of a breakup with his ex-boyfriend, Gabe returns to his job at The Rosebriar Room; the fine dining restaurant at the historic Sentinel Club Chicago Hotel. Already haunted by the ghosts of his severed relationship, he’s drastically unprepared for the ghosts of The Sentinel Club to focus their attentions on him as well.

When a hotel guest violently attacks Gabe, he finds himself the target of a dark entity’s rage; a rage built upon ages of racial tension and toxic masculinity. Desperate to escape the dark spiral he’s found himself in, Gabe flees across the city of Chicago and dives into the history of the hotel itself. Now, Gabe must push himself to confront the sort of evil that transcends relationships and time, the sort of evil that causes damage that ripples across lives for generations.

Gabe must fight to break free from the dark legacy of the past; both his own and that of the hotel he works in.
Available ebook formats: epub
Price: $4.99 USD
Buy Add to Library Give as a Gift
How gifting works
Create Widget
Tags: thriller suspense gay lgbt paranormal supernatural ownvoices
About Jose Nateras

Jose Nateras is a Chicago based Actor, Writer, and Director who’s worked extensively on stage and screen. Having trained at The Second City, The British American Drama Academy (Midsummer at Oxford ’09), Jose is a graduate of Loyola University Chicago. Having graduated with his MFA in Writing from The School of the Art Institute of Chicago (SAIC), he’s a resident playwright with ALTA Chicago’s ‘El Semillero’ (residing at Victory Gardens). Jose has written a number of shorts, pilots, and full length films, and is a contributor for The A.V. Club and elsewhere. He’s also been known to play the role of adjunct professor and teaching artist around town from time to time as well.

Reviews of Testament by Jose Nateras

You have subscribed to Smashwords Alerts new release notifications for Jose Nateras.

You have been added to Jose Nateras's favorite list.

You can also sign-up to receive email notifications whenever Jose Nateras releases a new book.