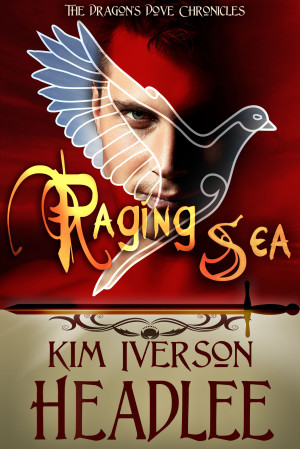 By Kim Iverson Headlee
How can one angry soldier hope to make a difference? How can one angry woman hope to save her kin and clan? In the crucible of combat, Angusel must open himself to the will of the gods, and Eileann must invoke divine power to forge the most dangerous warrior the world has ever known. More
Outcast, clanless, and but a junior officer in Arthur the Pendragon’s army, Angusel struggles to rebuild the life stolen from him through betrayal by the person he had held most dear. His legion allegiance thrusts him onto the campaign trail as one of Arthur’s forward scouts, stalking Angli troops and being among the first to clash with these vicious enemies at every turn. But the odds loom high against him and his sword-brothers, and they will need a miracle just to survive.

Pressured to make the best choice to ensure her clan’s future leadership, Eileann struggles with her feelings for Angusel, whose outcast status makes him forbidden to her as a mate. When Angli treachery threatens everyone she loves, she vows to thwart their violent plan to conquer her clan. But she is no warrior, she has no soldiers to command, and she will need a miracle just to survive.

How can one soldier make a difference? How can one woman save her kin and clan? In the crucible of combat, Angusel must surrender to the will of the gods, and Eileann must invoke divine power to forge the most dangerous warrior the world has ever known.
Available ebook formats: epub
Price: $2.99 USD
Buy Add to Library Give as a Gift
How gifting works
Create Widget
Tags: king arthur celtic celts roman britain arthurian legends lancelot guinevere queen guinevere celtic britain sir lancelot
About Kim Iverson Headlee