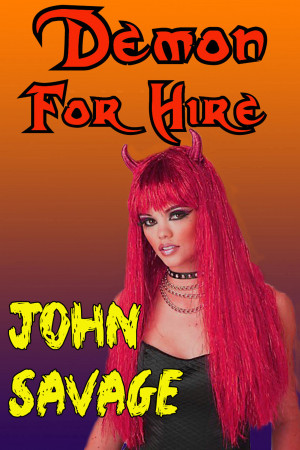 Alcarzara did something almost impossible: she got kicked out of Hell and is forced to forever walk among the living, still a demon. She tries to fit in among the living, even taking a job as a private detective. But one of her first cases is almost more than she can handle. A powerful demon has possessed a teenage girl and it’s up to Alex Zara (as she now calls herself) to try and save her. More
Alcarzara did something almost impossible: she got kicked out of Hell. Her crime: being too soft on humans. So now she has to walk the Earth (Heaven won’t take her in, and Hell won’t take her back) and somehow find a way to fit in with those who she formally tormented.
She finds a job that she might be good at doing, but almost immediately she runs into a case that even a former demon can’t handle. Her client is a teenager girl suffering from demonic possession! Will Alex Zara (as she now calls herself) take the case, or walk away? How much of the evil demon is still inside her? How much does she want to reform? And what can she do anyway when faced with a more powerful demon than she ever was?
Available ebook formats: epub mobi pdf lrf pdb txt html
First 10% Sample: epub mobi (Kindle) lrf more Online Reader
pdb
Price: $4.99 USD
Buy Add to Library Give as a Gift
How gifting works
Create Widget
Tags: demon paranormal exorcism demoness occult fiction
About John Savage

John began his writing career in 1969 with an article written for Barbara Behr of House of Milan. But before he began writing novels, he was the photographer and editor of several B&D magazines with such titles as “Best of Bondage,” “Taskmaster,” “Bondagemaster,” and the politically incorrect “Teenagers in Bondage.” (None of the models were underage, despite the title.) In the early 80’s he edited, wrote for and photographed a magazine series called “John Savage’s Notebooks.” These long-ago magazines today command a high price, if you can find them.
He has worked with Barbara Behr, Bob Bishop and F.E. Campbell, well known names in the B&D field. It was through his friendship with Frank Campbell that he became involved in the writing of B&D novels. Frank was considered the most prolific B&D novelist, credited with 100 books written for HOM. As Frank became older and had trouble typing, he began dictating books on audio tapes. John Savage then transcribed those books to computer disk for the publisher. Then came a time when Frank no long wished to write. At that point John began ghost-writing Frank’s novels.
After Frank’s death, John began selling novels under his own name to House of Milan. He also wrote for Sandpiper Press, Olympia Press and Bon-Vue, all being published as paperbacks. With his computer background, it was an easy switch to ebooks when they became popular. He is currently writing B&D novels and occasionally non-B&D books under a different penname. As of this publication, he has a total of 140 novels to his credit.
As to the man himself, he was born in 1943, is married, has two grown children and (so far) three grandchildren. He is a Viet Nam era veteran. Before taking up writing full time, his main career had been in computers, ranging from programmer to systems analyst. He still programs computers and enjoys it. He has a B.S. and an M.S. in computer science. Today he lives in Solana Beach, California, with his wife of forty-three years, enjoying his hobbies of astronomy, fishing and fast sports cars and, of course, writing.

You have subscribed to alerts for John Savage.

You have been added to John Savage's favorite list.

You can also sign-up to receive email notifications whenever John Savage releases a new book.