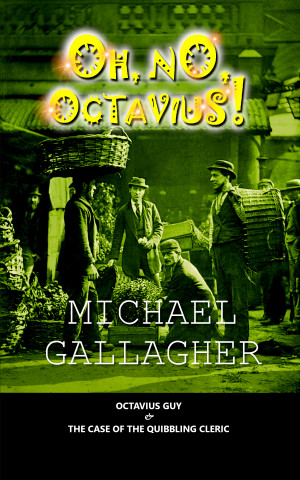 Reviews of Oh, No, Octavius! by Michael Gallagher

I loved this book as I did the previous ones in the Send For Octavius series. Sad that this is the last book of the series, I hope Michael continues to write more of this character. I would love to see Octavius and Annie hook up, she seems to be a brave and bubbly girl and the little romance between them mentioned in this book is kept so subtle and brief that none of that becomes a distraction from the main plot. I took time to read and enjoy this well told story. Although I wanted to see how the mystery was solved, the elegant prose and the author's writing style kept me reading at a steady pace. I want more of Octavius Guy and his gang!

Whenever I start a new Octavius Guy story, I remember why I love this series so much, and this latest offering does not dfisappoint!

Octavius and George go undercover in the village of Highbury to investigate the Rector of the local church, a man by the name of Reverend Burr, who some of the locals are unhappy with. They are hoping the boys can dig up some dirt on him so they can use it to have him replaced, but before that can happen, someone decides to get rid of Reverend Burr another way... by murder! What starts off as a somewhat simple investigation turns into something much more complicated, and has Octavius and George using all their detecting skills to uncover the killer.

As usual, the author has some an amazing job with his research and detail. Set in Victorian times, the characters and their lifestyle comes alive, giving the reader a true feel for the way life was lived by some of the different social classes at the time. The mystery itself is intriguing and it kept me guessing right till the end. Octavius and George are such solid. and likeable characters that I found it easy to imagine them as I read, hearing their banter in my head, and enjoying the different aspects of their relationships with each other. The inclusion of George's sister. and her budding romance with Octavius, much to George's consternation, made for some humourous moments, and I look forward to seeing how that evolves in future books.

Octavius is clever and astute in his deductions, but has a hearts that cares about the people involved, and weighs justice with that in mind. He and George make a great pair and complement each other well in personality. I especially liked how the story was resolved in this case, and I really enjoyed having it set outside of London for a nice change of pace. Village mysteries with lots of interesting characters who all have a motive are always a favourite of mine, and the excellent historical research (and notes at the end) makes it perfect for anyone who, like me, is also a history buff who loves a glimpse into how people lived in the past. This series just gets better and better. I can't wait to read about their next adventure. Highly recommended!

I've said it before and I'm saying it again- Michael Gallagher is a master storyteller. This, the latest in the Octavius Guy series, has all his familiar trademarks - ingenious plot, brilliant characters and pitch-perfect dialogue - and is related with Gallagher's typical warmth and wit. His sense of the Victorian setting is superb.
The mystery twists and turns intriguingly. The denouement is quite astounding in its conception and the short epilogue is very satisfying. The whole thing is completely enjoyable and thoroughly entertaining
I was glad to see the welcome (though brief) returns of Julius, Tricky, Bertha and Mr Bruff... and mention of a certain Sergeant Cuff. And I'm sure we've not seen the last of Sergeant Gray.
As ever, the author's notes at the end are an extra bonus.

What a fun and enjoyable mystery! I found the characters to be interesting and the interactions between the main characters humorous as well as entertaining. The mystery was set in the Victorian era and appeared to be true to the how it has been depicted in history and other historical novels. Though the protagonist is a teenager he was capable and behaved as one who is young but very bright. The author cleverly had the murder occur at the beginning of the story, then proceeded to provide the back story through the events that led up to the murder and allowed the reader to become familiar with the cast of characters and potential murderers. As the reader follows the main character, Octavius, through his work on the case the picture of the situation that led to the murder unfolds, but it also gives the reader a picture of the Victorian era and how people lived during this time. The ending was a nice touch and not the usual ending for a murder mystery. I would recommend this book and would like to read more of this author's books in the this series.

You know a series is a favorite when the author notes and extras are as enjoyable to the reader as the story! This series is a wonderful addition to any mystery lovers library. For fans of historical fiction, especially Charles Dickens, Wilkie Collins and Sherlock Holmes and their contemporaries and authors inspired by them. Not only is this a great mystery but a fabulous look at the times and conditions. Included, as is popular in present day mystery books, are several recipes at the end!

Having established themselves as actual investigators, Octavious and guy pal George find themselves going under`cover in this latest installment of this Victorian era detective series. They are hired to find a way to remove an undesirable head master and Reverand from a local boys school, quite a step up from their own station in life. Octavious is poised as a distant relative of a client to attend the school while George is employed as a manservant. The daily meals are a bonus to this job.
Tough subject matter is spotlighted as well as questionable choices and behaviors made by a female member of the household. We also get to view more of George and Octavious's personal life, as the latter pursues his interest in George's sister.

There is so much in this series to love! From the storyline, to the characters I have fallen in love with, and, as mentioned above, all the wonderful extras author Michael Gallagher provides for his readers, FASCINATING stuff! Excellent job, as usual. A box set of these books would make a most wonderful gift for your own favorite reader. Be sure to buy copies for yourself as well. I suggest the print version so you can appreciate the wonderful covers.

This series just gets better and I thoroughly enjoyed this latest story. Here in book four, teenage investigator Octavius Guy and his sidekick George, go undercover and get to mingle with the well heeled residents of Highbury, back then just a village beyond London. The plot is based on an actual person and real event, and the lads are engaged by a group of neighbours who want to find some reason to remove their clergyman from his post. When the Reverend is found conveniently dead, there are plenty of potential culprits and red herrings for Octavius and George to grapple with, aided by “Guys Dictionary of Detection for Budding Detectives”. As the pair gain more experience at investigating crime, so their working relationship has become more believable and there are some very amusing exchanges between them. The cast of characters is brilliantly drawn and the 1850s Victorian London setting is, as always, impeccably researched by the author. Some of the regular characters make an appearance too, and this fourth in the series beautifully demonstrates Gallagher's witty and very readable writing style. There is a clever nod to a famous author of the era towards the end of the story (and I was pleased that I correctly guessed his identity). At the back of the book Gallagher provides some interesting insights about the real clergyman on which the plot is based. This whole series would make a wonderful TV mystery drama for family prime time entertainment. If you like Agatha Christie and Sherlock Holmes, you will definitely enjoy this book and I wholeheartedly recommend it.

I am lucky enough to be friends (so I consider) with the very agreeable author and get to review this very nice and entertaining series, and got this book as a gift for Christmas!

The action is set in the Victorian era, a few decades before Sherlock Holmes, but Octavius Guy could very well have worked for him.
He’s very young (in this installment he’s all of fifteen, but with a little brother and a dog in charge), has a privileged intellect and knows and manages very well and has contacts in the underworld of London (we have seen that in the previous volumes of the series, but here “Bertha” also makes an appareance).
It’s a criminal case all right, with the murder of the quite nasty cleric and all its implications and whodunits. I didn’t know the legal term of advowson, which doesn’t let them get rid (without physically eliminating him) of the quibbling cleric, but it seems very interesting… and in some cases it still exists!
But I like the touches of humor, like the rivalry between a very English cook and a very Indian manservant/cook; both contribute interesting things, but Octavius understandably favours the first... doesn’t like the “herbs” 
We see also Octavius very in love with his friend/colleague investigator George’s (not much older than he is) lovely sister Annie. But beware, young George is already married to Mary, and she’s quite a character !
He’s also finally getting a real educacion, even learning latin (‘his’ way), and all’s well that ends well because he convinces Bertha that ‘her’ protégé the child William will do much better with an education in a school.
All in all, as enjoyable as the other books in the series, the setting and the language are impeccable as always.