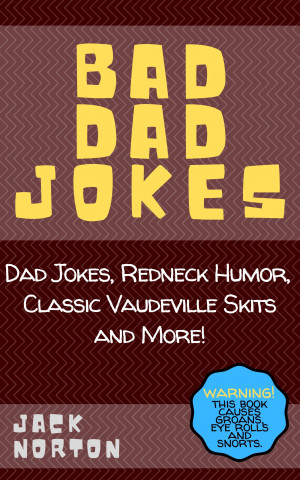 So sit back, relax and get ready to laugh your butt off at this horribly bad collection of dad jokes, redneck puns and classic one liners from the days of vaudeville.

You’ll be the coolest dad at the barbeque, the silliest guy in the office or the most loved (hated?) neighbor on the block if you use these jokes in your everyday life.

By the way, what do you get when you cross a joke with a rhetorical question?

Jack Norton is an Emmy Award winning writer, filmmaker and musician. He co-created The Zinghoppers Show for PBS. Norton is the host of “Jack Spins Shellac”, a podcast devoted to playing the lost gems of the phonograph era. Married to his high school sweetheart Kitty, the duo runs a production company called Norton Family Media.

Norton co-created, co-directed, co-wrote and co-starred in The Zinghoppers Show, a children’s television series which earned six regional Emmy Award nominations and was broadcast on over 150 PBS member stations nationwide and in 175 countries on the AFN Family Channel and on Trinity Broadcast Network. Jack’s 2015 feature length documentary film Jug Band Hokum, includes appearances by Garrison Keillor, Charlie Parr and rap legends Bone Thugs-n-Harmony. The film had a successful run at major film festivals and independent cinemas around the world and is currently available on Amazon.

In addition to his work in film, Jack Norton is a successful performing musician and has toured with Norah Jones, Dave Van Ronk, Leon Redbone and the Squirrel Nut Zippers. Recently with the vaudeville-folk duo Jack and Kitty, he performed in 19 countries for the US Pentagon, entertaining military families in Europe, the Mediterranean and the Middle East. Jack and Kitty have performed at the Kennedy Center for the Performing Arts in Washington DC and at the legendary Bluebird Cafe in Nashville, Tennessee.

Although Jack prefers life behind the camera, his acting work includes credited roles opposite Woody Harrelson and Laura Dern in Wilson (2016) and an unfortunate stint as a prisoner in the Tom Six cult horror film The Human Centipede III: Final Sequence (2015). In 2017, four original songs written and performed by Norton were featured in the Oscar nominated Willem Dafoe film The Florida Project (A24) by director Sean Baker (Tangerine) which debuted at the 49th edition of Cannes Directors’ Fortnight as part of the Cannes Film Festival.

Jack is a prolific writer, publishing books across many genres from nonfiction (music business, motivation, musicology) to fiction (thrillers, steamy romance and pulps), poetry and memoirs. He runs a daily blog which chronicles his life as an artist, read more at: JackAndKitty.com. In late 2019, Norton released Two Stalkers One Goal, a memoir co-written with his wife Kitty. In a story stranger than fiction, the inspiring book offers hope and healing for victims of stalking, cyberstalking, narcissistic abuse, gossip and bullying…all with more twists and turns than any Hollywood thriller.

You have subscribed to alerts for Jack Norton.

You have been added to Jack Norton's favorite list.

You can also sign-up to receive email notifications whenever Jack Norton releases a new book.