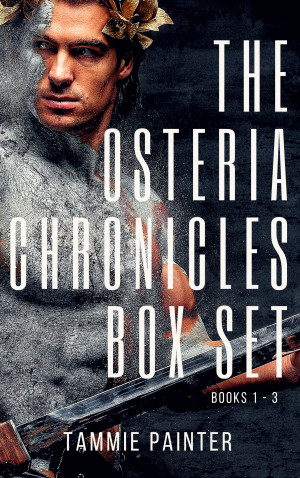 By Tammie Painter
Myths and heroes may be reborn, but the whims of the gods never change.

Enter a world where Game of Thrones meets Clash of the Titans with this collection of the first three books from the "highly recommended" Osteria Chronicles series. This set includes…
**The Trials of Hercules
**The Voyage of Heroes
**The Maze of Minos
**Exclusive Bonus Content More
Myths and heroes may be reborn, but the whims of the gods never change.

Enter a world where Game of Thrones meets Clash of the Titans with this collection of the first three books from the "highly recommended" Osteria Chronicles series.

Perfect for fans of mythology and historical fantasy fiction by Madeline Miller, Simon Scarrow, S.J.A. Turney, Mary Renault, and Glyn Iliffe, The Osteria Chronicles are a captivating series in which the myths, gods, and heroes of Ancient Greece come to life as you've never seen them before.

In anticipation of the conclusion of the series in 2020, this set includes…
**The Trials of Hercules: In a world where mortals contend with the gods' vengeful whims, one man must ask himself if he will risk his life to defend the goddess who has done everything to destroy him.
**The Voyage of Heroes: In a dangerous game that pits god against god, and family against one another, trust proves to be the deadliest weapon.
**The Maze of Minos: With the gods as your allies, your life, your world, and your sanity have never been in more danger.
**Exclusive Bonus Content: From the creation of the series to a tour through the world of Osteria, this collection includes a wealth of bonus material not available in earlier versions of the books.

Adventure, betrayal, and passion are waiting. Lose yourself in a new world by grabbing The Osteria Chronicles Box Set today!

What Readers are Saying...
"I strongly recommend this series..."
"This book should be rated as one of the top ten books of the year. I can't emphasize enough how good this book was and how much I enjoyed reading it."
"The interactions of the gods and mortals was inspired. Seeing the gods behaving badly was a treat."
"…kept me turning pages the whole way through like any guilty pleasure"
"…satisfying, from beginning to end."
"…highly recommended for fans of fantasy in general and Greek mythology in particular…"

What is Osteria?
Hundreds of years ago, North America experienced The Disaster. In what was once the Pacific Northwest, the survivors built a new world, Osteria, which was then divided into twelve city-states.

To this world came the gods formerly worshipped by the Ancient Greeks. The gods have not changed—they are still powerful, petty, and consumed with rivalries and jealousy.

And just as before, the gods do not play fairly with those who stand in their way.

Who Am I? Here's the Quick & Dirty Version

I turn wickedly strong tea into imaginative fiction. With a creative and curious mind, my stories run the gamut from historical fantasy to modern day paranormal to humor-laced horror.

In addition to several award-winning stories, I've completed two historical fantasy series that have taken readers into a captivating new world where the gods, myths, and heroes of Ancient Greece come to life as you've never seen them before.

I'm currently at work on a contemporary fantasy trilogy that’s filled with magic, mystery, snarky humor, and zombies because who doesn’t love zombies…especially ones with a posh British accent.

I'm also the host of The Book Owl Podcast where I explore the tales of quirky books and literary lore. It's a book nerd's paradise over there so be sure to give it a listen wherever you listen to podcasts.

When I'm not creating worlds or tormenting my characters, I conjure homemade wine and beer, plod around in the garden, and travel near and far (or dream about doing so for the time being).

Want to try my writing for free? Want a story you can't find anywhere else? You can snag an exclusive short story for free by visiting my website at TammiePainter.com and clicking on FREE STORY in the main menu.

I worked for years in science before discovering my true passion in writing. My fascination for myths, history, and how they interweave inspired my flagship series, The Osteria Chronicles.

The Osteria Chronicles, takes readers into a world in which the gods, heroes, and myths of Ancient Greece come to life as you’ve never seen them before. From gods behaving badly to heroes battling internal and external monsters, the six-book collection has been "highly recommended" by many, deemed as a "guilty pleasure" by some,

Also set in the world of Osteria is my serialized novel Domna, an epic tale of a woman whose life changes when she reprimands the wrong man. As she struggles through a world full of vicious ambition and betrayal, she quickly learns that destiny isn't given by the gods. It's made by cunning, endurance, and, at times, bloodshed.

Warning: You may lose many hours once you begin Domna's tale. As one reader noted, there was "so much political intrigue, betrayal and backstabbing I just HAD to keep on reading."

Find out more at TammiePainter.com

You have subscribed to alerts for Tammie Painter.

You have been added to Tammie Painter's favorite list.

You can also sign-up to receive email notifications whenever Tammie Painter releases a new book.