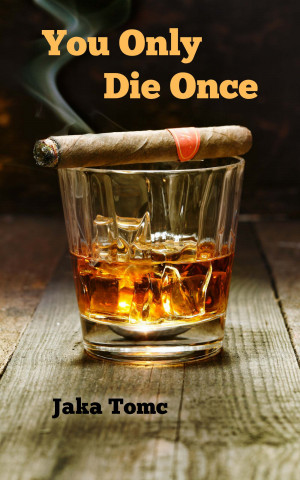 You Only Die Once: A Short Story

This short story, which flirts with the edges of metaphysical and noir fiction, will make you ponder about the statement 'you only live once.' Is it true or false? Do we live every day? What if life desensitizes you? Will life ever make sense? Perhaps a suppressive fire of neurons in your brain can help you figure out what matters most. Be it the number of years in your life or the quality of life in your years.

Take this short trip into the depths of this protagonist's mind. Stay up tonight, take all the courage you have left and dig in.
Available ebook formats: epub
Price: $0.99 USD
Buy Add to Library Give as a Gift
How gifting works
Create Widget
Tags: philosophy metaphysical war veteran short read contemplating life protagonist monologue shocking short story
About Jaka Tomc

When Jaka was three years old, sitting in his grandfather's lap, he wanted to do what grandfather was doing. So he learned to read. Starting with obituaries.

He started writing at the age of four. Soon he realized he was better at writing than talking, and he still is today. He doesn't like small talk. But his characters like it, use it and they're quite good at it. Jaka believes that this is one of life's ironies.

"People assume you must be a smooth talker if you're a writer. That's why I'm a writer and not a politician or a stand-up comedian. I observe and I write. I let other people do the talking."

He published seven books so far. Four of them became bestsellers in Slovenia.

His first translated novel, 720 Heartbeats, won the 2018 Breakthrough Fiction Award in the Suspense/Thriller category and was a finalist in 2019 IAN Book of the Year Awards.

Reviews of You Only Die Once: A Short Story by Jaka Tomc

You have subscribed to alerts for Jaka Tomc.

You have been added to Jaka Tomc's favorite list.

You can also sign-up to receive email notifications whenever Jaka Tomc releases a new book.