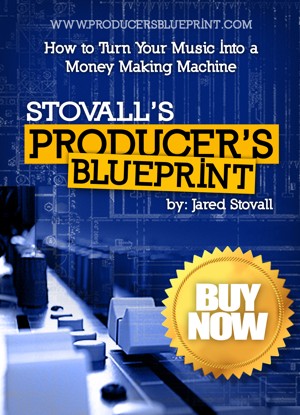 IF YOU ARE SERIOUS ABOUT BECOMING A FULLTIME PRODUCER...

What the Music Industry is desperately trying to hide from you?

The "3 Biggest Mistakes" made by up-and-coming rookie producers?

Priceless information that will shift your career from 1st to 3rd gear and actually have key people in the industry doing favors for YOU!

Here is just some of what you will learn in your e-book:

What record labels are really looking for from music producers.

The correct way to approach an A&R with your music

The vaulted secret to getting you inside a major label

The #1 necessity in landing a profitable production agreement and getting the money that will generate income until 70 years after you die.

It's all inside!
And this is just a graze compared to the Gems inside this book.

I would have paid almost anything for this explosion of information when I first started as a producer, so I wanted to make sure it was affordable to the average person aspiring a real career in music production.

Good luck to you all. See you in the industry.
Welcome to Your Future!

My name is Stovall and to sum it up I’m married to the Music Industry.

I have been producing in the music industry for 12 years. I have been a fulltime producer for 8 - meaning, this is my bread & butter. Music is how my bills and other expenses get paid each and every month. And I’ll tell ya, it’s a beautiful thing to admit. It almost isn’t fair.

But it is fair because I really enjoy what I do. So much, that when I work, it doesn’t really feel like working even in work environment that demands spontaneous creativity and long hours (you’re a producer you know what I’m talking about).

In my 8 years as a fulltime producer I’ve worked on projects/albums with the likes of superproducer Jazzy Pha (Ciara and countless other artists), Grammy nominated hit producer Nitti (Young Joc, Nelly, Lil Wayne, Kandi Burrus - Southern Producer's Award/2011 Producer of the Year) and Polow Da Don (Usher, Nikki Minaj, Fergie, Christina Aguilera) to name a few…
When I first moved to Atlanta from Tennessee to pursue a career in music production, I was completely lost and, to say the least, had no real direction. I made mistake after mistake - leaving me discouraged, depressed, and worst of all, BROKE!

But after analyzing my mistakes and trying different tactics and new strategies (priceless Gems rather) handed down by very valuable key people in the industry, my career jumped from 1st to 3rd gear almost instantly. I found I was playing checkers while the industry was playing chess!

Shortly, I found myself on very creditable projects that started the snowball effect in my career which turned pretty attractive profits. No matter what genre of music you produce; same rules apply.

I started in this business with a lot of up-and-coming producers whose dreams were butchered by the time consuming, money depleting mistakes so many rookie producers make early in their career. Most were very talented and I actually did enjoy working with those guys back then.

And that’s why I decided to write this book. My goal is to give you an extensive step-by-step "Blueprint" with insider secrets used by myself and today’s hottest superproducers in the game. At this vital stage of your career, this inside knowledge will help you save years of just spinning your wheels and not moving; it is designed to launch your career forward to more profitable and creditable projects.

You have subscribed to alerts for Sto Vall.

You have been added to Sto Vall's favorite list.

You can also sign-up to receive email notifications whenever Sto Vall releases a new book.