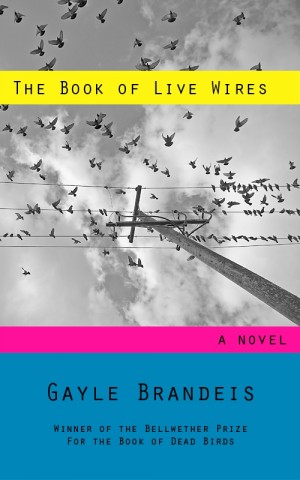 The Book of Live Wires

By Gayle Brandeis
The eagerly anticipated sequel to Gayle Brandeis' beloved Bellwether Prize-winning novel The Book of Dead Birds is now available exclusively as an ebook.

Narrated by Darryl Sternberg, Ava Sing Lo's love interest from The Book of Dead Birds and now her husband and the father of their baby, The Book of Live Wires is an electrifying novel about love, identity and family secrets. More
Still grieving the death of his first wife, Darryl Sternberg enlists a woman to translate his grandmother’s journals from Russian, French and Yiddish. He finds himself increasingly embroiled with his quirky yet provocative translator as she uncovers hidden stories within his Jewish roots. His new wife Ava Sing Lo, meanwhile, is searching for her unknown father, who had been a black soldier in Korea. Their baby is diagnosed with sickle cell anemia; as Darryl and Ava learn to navigate Bella’s illness, they also learn to navigate and confront the secrets they’ve kept from one another (and themselves).

Readers of the Bellwether Prize-winning novel The Book of Dead Birds will cheer the return of cherished characters, and new readers will fall in love with the Sternberg-Sing Lo family for the first time. Filled with humor and heartache, The Book of Live Wires is ultimately a story about moving forward with love, even in the face of uncertainty.

Praise for The Book of Dead Birds

“Lyrical, imaginative, beautifully crafted, and deeply intelligent. Before anything else, its characters take you by the heart.”
— Barbara Kingsolver

“[It] has an edgy beauty that enhances perfectly the seriousness of its contents.”
— Toni Morrison

“[A] vivid tale of a woman learning to save and cherish life.”
— San Francisco Chronicle

Gayle Brandeis is the author of Fruitflesh: Seeds of Inspiration for Women Who Write (HarperOne), Dictionary Poems (Pudding House), the novels The Book of Dead Birds (HarperCollins), which won Barbara Kingsolver's Bellwether Prize for Fiction in Support of a Literature of Social Change, Self Storage (Ballantine) and Delta Girls (Ballantine), and her first novel for young readers, My Life with the Lincolns (Holt). She released The Book of Live Wires, the sequel to The Book of Dead Birds, as an exclusive ebook.

Gayle's poetry, fiction and essays have appeared in numerous magazines and anthologies (such as Salon.com, The Nation, and The Mississippi Review) and have received several awards, including the QPB/Story Magazine Short Story Award, a Barbara Mandigo Kelley Peace Poetry Award, and a grant from the Barbara Deming Memorial Fund. Her essay on the meaning of liberty was one of three included in the Statue of Liberty’s Centennial time capsule in 1986, when she was 18. In 2004, the Writer Magazine honored Gayle with a Writer Who Makes a Difference Award.

Gayle holds a BA in “Poetry and Movement: Arts of Expression, Meditation and Healing” from the University of Redlands, and an MFA in Creative Writing/Fiction from Antioch University, where she currently teaches. She is also on the national staff of the women's peace organization CODEPINK and is a founding member of the Women Creating Peace Collective, as well as an advisory board member of the Afghan Women’s Writing Project. Gayle lives in Riverside, CA and has a son in college, a daughter in high school, and a toddler.

Reviews of The Book of Live Wires by Gayle Brandeis

Review
Donna Kennedy reviewed on Nov. 27, 2011
(no rating)
Addendum to my review: "The Book of Live Wires" is definitely star worthy, but I find such ratings too subjective and therefore don't use them.

(reviewed 11 days after purchase)
Donna Kennedy reviewed on Nov. 27, 2011
(no rating)
In her new novel, Gayle Brandeis takes us inside marriage and parenting with the intimacy and sensuality that her readers have come to expect and treasure. This time, she writes deftly from a male perspective, the sensitive thoughtful Darryl. Ever since "The Book of Dead Birds," I'd wondered if he and Ava had had a "happy ever after." They endure more than newlywed/new parents should, but their challenges make good drama. As always, I fell in love with an offbeat character in Gayle's fiction. This time it was Zipporah, whose place in the tale Gayle wisely leaves open-ended.

You have subscribed to alerts for Gayle Brandeis.

You have been added to Gayle Brandeis's favorite list.

You can also sign-up to receive email notifications whenever Gayle Brandeis releases a new book.