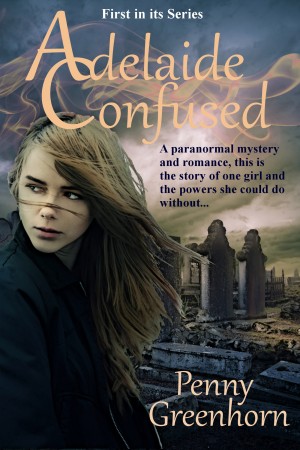 By Penny Greenhorn
Rated 4.67/5 based on 6 reviews
After sequestering herself to the tiny island of St. Simons, Georgia, Adelaide's plan to 'get normal' goes awry after a crackpot astrologist predicts she’ll meet with death. Now ghosts are appearing and Adelaide Graves is forced to admit that she has unwittingly acquired another gift. More
To Adelaide Graves, being empathic isn’t a gift, it’s a curse. Nothing could be worse than the barrage of emotions that are constantly seeping in, that is, until she starts seeing ghosts. Such gifts don’t go unnoticed by Reed Wallace, the island’s richest celebrity, who is quick to use his own gift to strong-arm Adelaide. Luckily, she’s half-immune to his unnatural charm, though not to his blackmail. Now his scheming has got her neck-deep in a dangerous race, desperate to find a demon diary, the key to unlocking another realm.
Download: epub mobi (Kindle) pdf more Online Reader
rtf lrf pdb txt
Price: Free! USD
Add to Library
Create Widget
Tags: urban fantasy demon supernatural teen ghost psychic
About Penny Greenhorn

Penny Greenhorn is a novelist who currently resides in Alaska. When she’s not writing science fiction, fantasy or misanthropes, she can be found off the beaten track with her fuzzy schnauzer, Boods. Her works include the Empath Series, Fiona Frost Trilogy, and a stand-alone urban fantasy, Harbinger. You can find out more about Penny and her twitterpated heroines at pennygreenhorn.com.

About the Series: Empath Series

A paranormal series with mystery and romance that fans of urban fantasy will love.

Enjoyable.
Adelaide is an empath who was forced by her mother to use pills and therapy to control her ability. She left home at 18, broke off all contact with her family and moved to a small island where she works as a receptionist of a small hotel. Her gift has made it difficult for her to socialise with others. She is unexpectedly pursued by the charismatic and wealthy Reed Wallace, but he has a hidden agenda. She is very attracted to her taciturn neighbour Lucas who appears to finds socialising just as difficult as she does.

Adelaide has to pretend to be Reed’s girlfriend but then has to fend off his jealous secretary and his business rival’s violent cronies. I loved the author’s prose and at times I laughed aloud especially when Adelaide yells at a ghost to prevent him from pointing to letters on the Ouija board as he has to work though her: the medium and not spoil her fun! I hope there’ll be a sequel to this novel as the author has left some unanswered questions: what exactly will Adelaide do with the demon book; is Reed romantically interested in her at all or was he just using her and why can’t she sense Lucas’ emotions?
Also published review on Amazon.co.uk.

liked the book a lot! Do have some gripes though... one major gripe, one middlin gripe and one weasley little gripe.

First, though, I'd say this author really has a talent & I got very involved in the world as presented. Especially the idea that an empath would rather avoid people than be lovey-dovey & understanding.

Major gripe -- the story just stops! Right in the middle of everything it just STOPS! This is not nice. I've read many, many serials, trilogies, etc. and this is just not the same thing. I was left feeling kind of ripped off emotionally. Why not clearly label a work as a
cliff-hanger" if that's what it is?

Second, middlin' gripe: All of a sudden the heroine jumps into the back of the truck belonging to this crazy, dangerous, torturing bad-guy -- even though all the previous story was built on how scared (with good reason) she was of him. Duh? very psychologically unlikely!

Tiney little gripe... in one passage the heroine realizes something and this is portrayed as having "donned" on her. Mispelling is rampant on the internet & I do a lot myself when it just seems too much trouble to correct it... This, though looks like a major flaw in understanding. the term is "dawned" -- as in the morning sun rising to illuminate something that was previously dark & hard to see.

I am left wondering wth is don, and why is he interested in "donning" on people.

I really did like the story, but I don't think I will read another by this author. I very much disliked the way it simply quit... no closure, no nothing...

Love the main and supporting characters! A refreshing take on this genre. Write more! Thanks

Amazing book! I couldn't put it down...it is definitely on a par with any of the current bestseller urban fantasy types, like Kim Harrison's Books of the Hollows and the Charlaine Harris Sookie Stackhouse novels & rivaling the Harper Connelly series, also by Harris. I don't have much money for books, so I was thrilled that this novel was free, but having read it, I feel a bit guilty for not paying...it was that good. Adelaide was amazing as a quirky heroine, but completely herself--not an amalgem of other author's heroines. I cannot WAIT for the next installment!!!

Loved the heroine, can't wait for next installment.

You have subscribed to alerts for Penny Greenhorn.

You have been added to Penny Greenhorn's favorite list.

You can also sign-up to receive email notifications whenever Penny Greenhorn releases a new book.