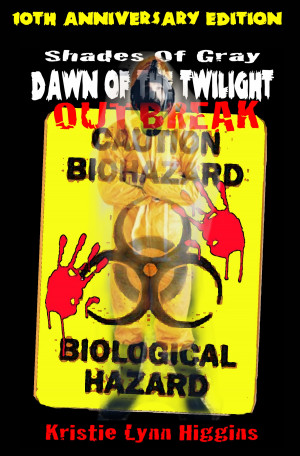 10th Anniversary: Shades of Gray #6 Dawn of the Twilight- Outbreak

Kat searches for clues to her past while androids called Un-Men and human bounty hunters try to kill her, and Kim searches for who murdered her mother. The two women's paths collide, and they form a shaky partnership to unravel the mysteries that haunt their lives and they try to protect one another from those who do not wish for them to discover the truth.

Everyone's soul is marked by a color. Which shade of gray will they hold to?

#6 Shades of Gray: Dawn Of The Twilight- Outbreak
Part two of the four-part zombie walking dead section of the series. Who will survive the zombie hordes? Who will become part of the zombies?

An unstoppable infection...
An incurable plague...

The Chimera Strain ran rabid through the Sphinx Corporation Third Branch Office. A few nighttime workers had survived the contagion. Could they escape before the building's auto lockdown trapped them in with the zombies?

An unstoppable army of undead...
An incurable fear...

One bite and one was infected. With time running out, could the survivors make it to their only escape route without losing any more to the Chimera Strain? Or would the minions of Anubis, the Jackal of Death bite their way to victory?

Read this action adventure science fiction mystery thriller book series and follow Kim and Kat while they form a friendship that will endure through trials and pitfalls. Kim and Kat can only depend on each other in this dystopian action-adventure fantasy science fiction story serial series.

A doom was looming over the planet, a great darkness that could bring about the Closing of Days. Two women would be brought together... One was a legal assassin or Life Closer known as the Phoenix and the other was an experiment known as the Pandora Project who would either bring about a Twilight that would be the first rays of dawn or a Twilight that would usher in the darkness forever. Follow these women as their paths cross.

You have subscribed to alerts for Kristie Lynn Higgins.

You have been added to Kristie Lynn Higgins's favorite list.

You can also sign-up to receive email notifications whenever Kristie Lynn Higgins releases a new book.