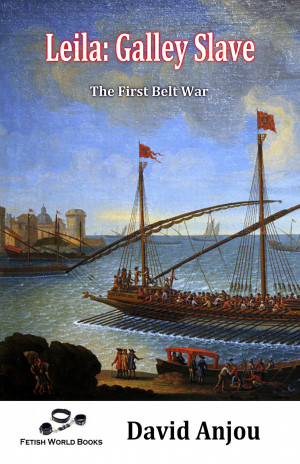 Leila lives a thousand years in our future, on an isolated colony where the preservation of the fragile ecosphere is the highest priority. The use of fossil fuels, metals and mined chemicals is kept to an absolute minimum, and land transport is drawn by ponyslaves. On the oceans, the great galleys maintain a regular service for freight and passengers between the planet’s two widely separated continents, passing through a narrow strait in a ‘belt’ of barren rock that girds the equator. When that waterway is closed by hostile savages, the transports suddenly become warships. Leila’s role changes out of all recognition, bought as a pleasure slave by the aristocratic commander of the naval expedition. The princes, ministers and officers who use her body soon begin to appreciate her other talents, for she is surprisingly knowledgeable about naval warfare; a teenage interest. Plunged into the first war ever to be fought on the planet, she witnesses scenes of heroism and extreme cruelty, is often in great personal danger, and achieves a degree of influence quite unique- and perilous- for a slavegirl.
Available ebook formats: epub mobi pdf lrf pdb txt html
First 5% Sample: epub mobi (Kindle) lrf more Online Reader
pdb
Price: $7.95 USD
Buy Add to Library Give as a Gift
How gifting works
Create Widget
Tags: scifi bdsm bondage fetish galley slave

You have subscribed to Smashwords Alerts new release notifications for David Anjou.

You have been added to David Anjou's favorite list.

You can also sign-up to receive email notifications whenever David Anjou releases a new book.