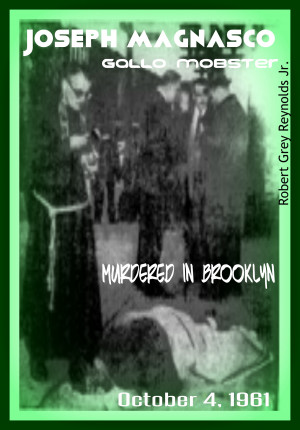 By Robert Grey Reynolds, Jr
On October 4, 1961 Gallo mobster Joseph Magnasco was killed in front of the College Restaurant on 4th Avenue in Brooklyn. Within fifteen minutes after the shooting the Gallo brothers were rounded up at their 51 President Street, Direct Vending Corporation headquarters. Arrested eleven times during his criminal career, he had been imprisoned for armed robbery. He was on his way to visit his mother. More
Gallo mobster Joseph Magnasco was on his way to visit his mother when he was gunned down in front of the College Restaurant in Brooklyn. In the days after this shooting, the New York Police believed Magnasco might have been killed by one of his fellow Gallo associates. A career criminal, my e-book looks at Magnasco's early years in crime. 1961-1962 was an era of gang warfare between the Gallo brothers and the more established Profaci Mafia. The Gallos entrance into the lucrative policy racket brought them into the crosshairs of rival gangsters.