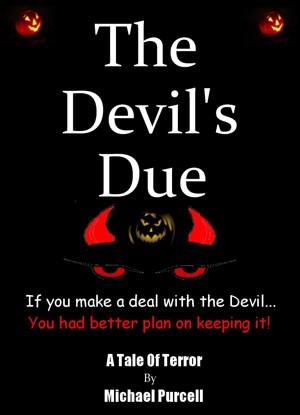 By M Purcell
Rated 4.00/5 based on 1 reviews
The Devil comes to a small town on Halloween evening. Terror grips the town, and one young boy's Life will be changed forever. He is slowly tormented his entire life, until the day comes when he must fight for his immortal soul. The horror will have you on the edge of your seat as Donald Lemore tries to save his sanity, and avoid spending an eternity burning in hell.
Download: epub mobi (Kindle) pdf more Online Reader
rtf lrf pdb txt
Price: Free! USD
Add to Library
Create Widget
Tags: horror dark terror fiction the devil ghouls demons hell angels god satan halloween evil gruesome demonic ghost suspense action free monsters pagan fear horror fiction death paranormal
About M Purcell

Michael Purcell lives in the beautiful Hudson Valley region of upstate New York. Having an Assossiates degree in Environmental Studies, he has strong feelings about nature and our planet. You will find these feelings in some of his poetry.

He began by writing songs for his band in NYC as a teenager, and grew into writing poetry and later short stories and now novels.

An avid reader of Horror and Fantasy writng, he quickly became a fan of writers such as Dean Koontz and Stephen King. His short stories and novels are in that gender as he is drawn to it as a moth to a flame.

On a persoanl note: I’m very down to earth, and choose love and friendship before materialistic gains,(not that they are not important). I am a true romantic, and believe in the magic of love…even love at first sight is a notion I still entertain. I am a great animal lover, but have not had a new pet since my beloved baby beagle died, (that was his name by the way). I like the city as much as I do the country, but there is much to be said for being able to have a cup of coffee in the morning, outside watching the sunrise with no horns or sirens blowing. I have found writing and drawing, to be a welcome faucet in which I could let out internal thoughts and emotions. Which could not possibly be released with the same temperament, if I were to just talk to someone. I have recently become rather obsessed with writing short stories and Novels. I having been a long time fan of Dean Koontz and Stephen King. I find I am drawn to writing Horror and fantasy stories. I have two story finished, and over 4 stories started, with over a dozen more plots outlined waiting to be but to paper. Want to know more please ask.
I can be reached at my email addy: gudpoet@yahoo.com
Also by the same handle on Yahoo Instant messenger, if you feel so inclined.
Bye4now,
Mike

The Devil's Due
This is just a short video that I made to promote "The Devi's Due". It is far from Hollywood quality, but I had a lot of fun putting it together. Perhaps you will enjoy watching it...then again perhaps not. But don't judge the book by the movie, the book is far, far better!!

Definitely a good read. It's a great horror story with interesting religious views that were tied together well. I especially enjoyed the vivid details and scenery. I would definitely read more from this author.

You have subscribed to alerts for M Purcell.

You have been added to M Purcell's favorite list.

You can also sign-up to receive email notifications whenever M Purcell releases a new book.