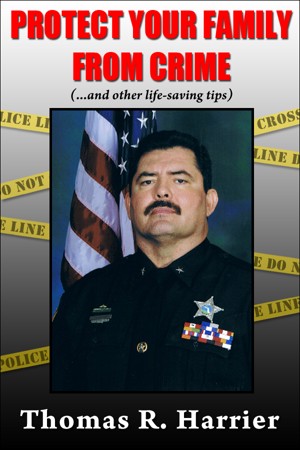 Protect Your Family From Crime! (..and other life-saving tips)

By Tom Harrier
Written by a 33+ year law enforcement and SWAT veteran who worked in the toughest crime areas, this book addresses how to protect you and your family from crime; how to become "hard targets" and minimize your chances of becoming a crime victim. Additionally, there are chapters dedicated to protecting your children from the every-day hazards they may face. This book could truly be a life-saver.

Thomas Harrier is a thirty-three+ year veteran of law enforcement. His career started in the U.S. Army Military Police, where he was stationed at Ft. Benning, Ga. After completing his military obligation, he obtained his Associates degree in Criminal Justice from Valencia Community College and his Bachelors degrees in Criminal Justice from the University of Central Florida in Orlando. Then, he was hired by the Los Angeles County Sheriff’s Department where he worked from 1981-1982 as a deputy sheriff. Leaving Los Angeles, he returned to Orlando to work as a deputy for the Orange County Sheriff’s Office. He worked full time there from 1982 through 1993, when he then chose early retirement to pursue other business ventures; however, he remained in law enforcement as a reserve deputy. While with Orange County Sheriff’s Office, his assignments included Uniformed Patrol, the Tactical Unit, the Street Crimes Unit, Community Policing and Problem Oriented Policing. He has taught thousands of other law enforcement officers in a variety of subjects, including Survival Attitude, Building Entries and Searches, Defensive Tactics, Handcuffing Techniques and Side Handle Baton. He co-developed the Vehicle Felony Stop Maneuver, which is still being taught today. Mr. Harrier was responsible for developing a weapon retention system that proved to be highly effective. He was a member of the SWAT Team for ten years, serving as a sniper and also as a rapid entry specialist on High Risk Entries.

You have subscribed to alerts for Tom Harrier.

You have been added to Tom Harrier's favorite list.

You can also sign-up to receive email notifications whenever Tom Harrier releases a new book.