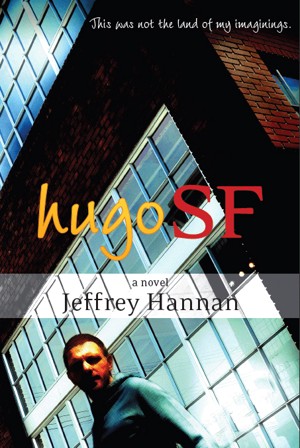 By Jeffrey Hannan
Holden Caulfield meets Thomas Pynchon in this sumptuous paean to paying the rent. HugoSF chronicles the coming into life of a young salesman at the start of the 21st Century. Relayed from the landscape of a very contemporary San Francisco, it is a cautionary tale of truth, work and economics during an era in which nothing is truly as it seems. More
With his employer stock options worth nothing and a crippling tax bill ahead of him, Hugo Storm sits sheepishly in the office of an accountant days before the Great Bust of 2000. “Eight hundred dollars,” the accountant tells him. “That’s all I owe?” Hugo beams. “No,” replies the accountant, “that’s my fee.”

It’s a sinking moment in the life of a young internet salesman for whom everything is on the verge of going south.

For anyone who lived and worked through the Internet boom – or even if you didn’t – the novel masterfully evokes that time, its people and its sentiments with “sumptuous” language and “characters that you immediately fall in love with.” It charts seven years in the life of Hugo Storm, a genXer from New Jersey living in San Francisco from the height of the Boom, down through the Bust and ending at the teasing upswell of the real estate bubble.

Although fixed in time, HugoSF is more than an historical chronicle. It’s a cautionary tale of truth, work and economics that makes a reader ponder his or her own relationship to work. To the up and down cycles of economics. To families and friendship. And to the difficult realities we choose to avoid in our own lives: all those little stories we tell ourselves because it’s…easier?

Unlike the seemingly endless supply of fabricated icons of celebrity, wealth and tragedy, Hugo Storm is a refreshing, truly American everyman elevated through storytelling into a hallmark character of our time. As life goes south, then slightly north again, he is forced to confront an inescapable triad of truth, work and economics in an era in which nothing is truly as it seems.

After fourteen Fellini-esque years in its grip, Jeffrey Hannan fled the internet industry for the wilds of Puna, Hawai'i to start a tea farm. He lives there and in San Francisco and writes under the moniker, ‘A Gentle Iconoclast in Paradise’.

HugoSF is his second novel. The first is in a safe deposit box; it will be mined of any useful material and then burned.

Jeffrey Hannan is on the web at http://jeffreyhannan.com.

You have subscribed to alerts for Jeffrey Hannan.

You have been added to Jeffrey Hannan's favorite list.

You can also sign-up to receive email notifications whenever Jeffrey Hannan releases a new book.