Published 2019-02-14.
When did you first discover a love of writing?
I would have to say that I discovered my love for writing at a very early age. When I was around nine, I began writing script/plays for the Youth and Sunday School programs at my church on the island of Nevis in the West Indies. Then later on, I wrote Christian songs that my brothers and I used to sing in church, and love poems that I shared with my closest high school classmates, and then with my co-workers once I entered the workforce—a strange combination, I know. I feel that I was born to be a writer.
Where do you get your story ideas?
I’m a character-driven writer and I see people interacting in my head before I know the plot. A story may come to me in a dream or it might be triggered when I see someone doing or saying something out of the ordinary, or something quite simple. My inspiration for Erik, the hero in The Doctor’s Secret Bride came about at a funeral. I saw this sad man standing beside his wife’s coffin; he was holding a little girl’s hand, and I thought, “You poor, poor man, what happened to you?” My then precocious 5-year old daughter inspired Precious’ character. Michelle just fell from the sky, like an angel. She was an angel for both Erik and Precious.
How did you choose the genre you write in?
I began reading romances around age fourteen—mainly Mills & Boons, Silhouette, Harlequin, and Historical novels—the books available in the library on my native Caribbean island of Nevis. I totally enjoyed the drama, the falling in love, the breakups, and then the reconciliation and Happy Ever After of each story. However, as I got older and continued reading my favorite white authors, I realized that there weren’t any romances written by or about black people. I mean, we fall in love and fight and have makeup sex, too. I had a deep desire to rectify that lack of cultural and ethnic diversity in the romance genre.

In the early nineties, I began writing A Mother For Precious. It later became The Doctor’s Secret Bride – Book One in my Billionaire Brides of Granite Falls series. I shopped it around the traditional way, and although several of the Big Six editors loved the story, there was no market for it. Then in 1995, New York Times and USA Today Bestselling African-American Author, Brenda Jackson, arrived on the scene and published the first black romance novel, Tonight and Forever. I devoured that book in one sitting. It encouraged and inspired me to follow my heart and my passion to write black romances. It also helped that I was in an interracial marriage at the time, so it wasn’t only about black romance but multicultural and interracial, as well.
What motivated you to become an indie author?
After trying to be traditionally published for two decades, and being rejected time and time again, I finally decided that enough was enough. I had to make my own dream come true. I was inspired by Ruth Cardello’s success as an indie author. Ruth and I met in 2010 at another romance author’s summer garden party and we were both trying to sell to Harlequin at the time. She went indie the next year and made the NYT Bestsellers List within a few months. I attended RWA Nationals in 2011 where several authors talked about continuous rejections that let them to self-publish. Since Ruth and I wrote similar books, I thought I’d try my own hand at indie publishing. I went home, re-wrote The Doctor’s Secret Bride, and published it in June 2012. I’m so happy for all those wonderful rejections from New York, and I haven’t regretted my decision to self-publish, not for a minute.
What's your favorite book?
I have two favorite books: “Far From The Madding Crowd” by Thomas Hardy and “Middle March” by George Elliot. I love the intricacies of the heroines’ characters in those two books.
What was your favorite book as a child?
I didn’t have one particular favorite book as a child, but instead I loved the collection of stories from Hans Christian Anderson, The Bobsie Twins, and Nancy Drew.
What is the best piece of advice you've ever received as a writer?
I took a creative writing class in college, where each student was required to choose an author as a mentor. I chose Jamaica Kincaid, specifically because she is also from the Caribbean, and of course because I admire her writing—it’s so direct and poignant and filled with facts and events about growing up in the Caribbean. I had the opportunity to meet her at a nearby college where she was conducting a reading of her latest book. When I asked her if she wasn’t embarrassed to write about the events about her childhood, she said, “You have to tell the truth.” Sometimes when I’m writing I hesitate during a scene because I feel that I might be pushing the envelope, but then I remember Ms. Kincaid’s words about telling the truth, and I let my fingers fly.
Where do you usually write?
At the moment, I share a two-bedroom condo with a friend. We have an extra room that I can use as an office, but it’s too close to the living room, so I write at a small desk in my bedroom where it’s a little removed from the busy areas of the house and a lot quieter. Sometimes when I need a change, I switch it up between my local Panera, Barnes & Noble, and the libraries at two nearby universities.
Do you believe in Writer’s Block?
YES! I have writer’s block big time. It’s the most frustrating experience for writers to go through. At those times, I’ve learned to just walk away from the book for a couple days until my brain recharges.
Any guilty pleasures?
Oh yes! Curried and buffalo chicken wings and rum and raisin ice cream. I try not to keep them in the house too often
What are you currently working on?
I’m currently working on Seduced by Passion - Book One in the firs part of my third series - Billionaire Island Brides – Akilina Connection that’s a spinoff of my first series Billionaire Brides of Granite Falls. My fans love the heroes in my first series, whom they nicknamed the Fabulous Four, so much that they’ve asked for their return in any future series. I gave them what they wanted in my second series, Beyond Granite Falls, and I’m hoping they’ll be just as pleased with my series in progress. The sky’s the limit as far as my writing career goes.
Smashwords Interviews are created by the profiled author or publisher. 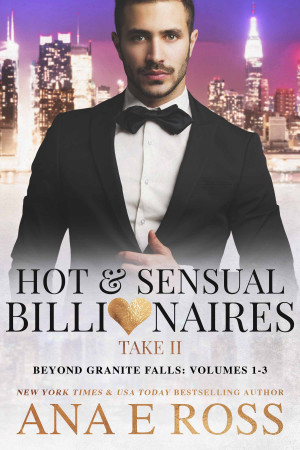 Hot and Sensual Billionaires Take II: Beyond Granite Falls: Volumes 1-3 by Ana E Ross
Series: Beyond Granite Falls. Price: $8.99 USD. Words: 275,250. Language: English. Published: January 4, 2019. Categories: Fiction » Romance » Contemporary, Fiction » Themes & motifs » Family sagas
Rejected. Abandoned. Betrayed: When the men of their dreams let them down, can these women learn to trust them again? And how far would their men go to win them back? 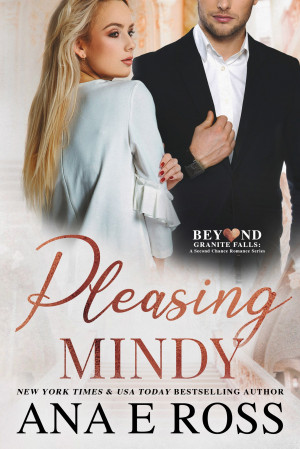 Pleasing Mindy by Ana E Ross
Series: Beyond Granite Falls, Book 3. Price: $3.99 USD. Words: 96,210. Language: English. Published: January 6, 2018. Categories: Fiction » Romance » Contemporary, Fiction » Romance » Suspense
Born and raised in England, Galen believed that his biological father died before he was born, but one phone call from an American half-brother he never knew existed changes Galen's life in ways unimaginable. Mindy, single mother of two, fell hard and fast for the handsome Brit, but when Galen disappears from her life for eight months she realizes that what a man says isn’t always what he means. 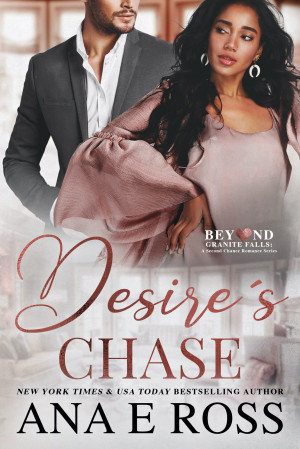 Desire's Chase by Ana E Ross
Series: Beyond Granite Falls, Book 2. Price: $3.99 USD. Words: 90,100. Language: English. Published: January 6, 2018. Categories: Fiction » Romance » Contemporary, Fiction » Mystery & detective » General
When Chase Hunter returns to his hometown of Evergreen to avenge the wrong done against him twelve years earlier, he becomes easily distracted with the unexpected news of his younger brother’s engagement to the girl Chase had been forced to leave behind—a girl, who has now blossomed into a stunning, desirable woman. Chase must find a way to stop the nuptials and win back the love of his life. 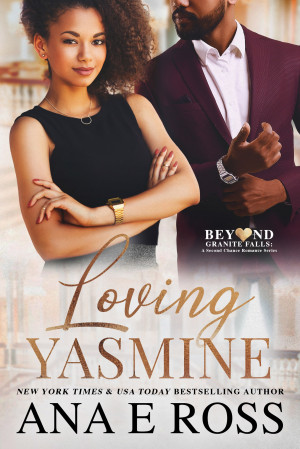 Loving Yasmine by Ana E Ross
Series: Beyond Granite Falls, Book 1. Price: $2.99 USD. Words: 90,460. Language: English. Published: January 6, 2018. Categories: Fiction » Romance » Contemporary, Fiction » Romance » Suspense
Robert Carter survived an abusive upbringing from an alcoholic father to become one of the most brilliant and successful orthodontists in Boston. Now, financially secured and emotionally stable, he’s ready to settle down and raise a family. But the one woman he desires to make his dreams come true has other ideas about love and marraige. 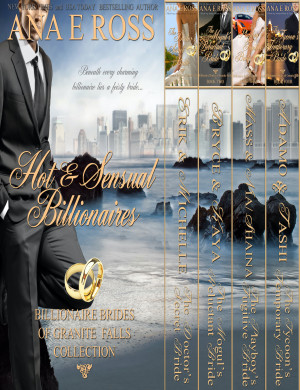 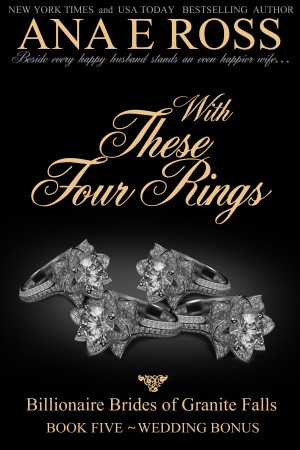 With These Four Rings - Wedding Bonus by Ana E Ross
Series: Billionaire Brides of Granite Falls, Book 5. Price: $4.99 USD. Words: 84,600. Language: American English. Published: June 7, 2015. Categories: Fiction » Romance » Contemporary, Fiction » Romance » Suspense
Catch up with your favorite Billionaire Brides couples and watch the continuing saga in Granite Falls as… The LaCrosses cope with a death in the family… The Fontaines tackle demons from their past… The Andrettis address a surprising revelation... The Andreases face an unpredicted nemesis… And then join them as they renew their vows of love and commitment in the Spectacular Wedding of the Century. 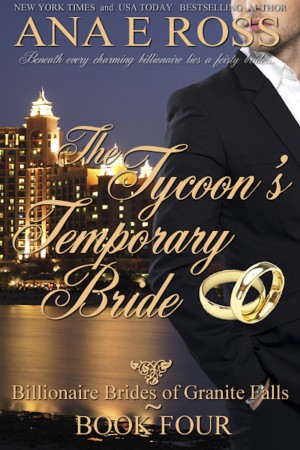 The Tycoon's Temporary Bride by Ana E Ross
Series: Billionaire Brides of Granite Falls, Book 4. Price: $3.99 USD. Words: 125,870. Language: English. Published: November 9, 2014. Categories: Fiction » Romance » Contemporary, Fiction » Mystery & detective » General
After one left him standing at the altar, Adam Andreas, a.k.a., the Temporary Tycoon, has sworn off damsels-in-distress. But when he bumps into Tashi Holland a woman on the lam who’s running from some really bad guys, Adam can’t resist offering her protection as his Temporary Bride. Will she accept, or refuse in order to protect him from the same fate as the FBI agent who died rescuing her? 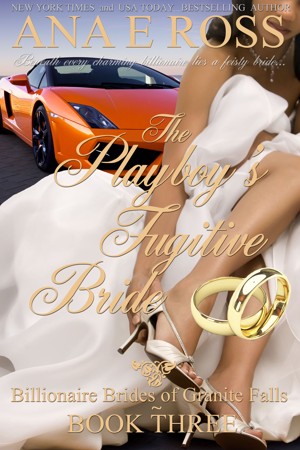 The Playboy's Fugitive Bride by Ana E Ross
Series: Billionaire Brides of Granite Falls, Book 3. Price: $3.99 USD. Words: 118,210. Language: English. Published: January 5, 2014. Categories: Fiction » Romance » Contemporary, Fiction » African American fiction » Contemporary woman
Massimo Andretti must marry by his 34th birthday to claim his inheritance. So when Nia Sylk, a beautiful schoolteacher offers him her virginity in exchange for four million dollars, he weighs the benefits of marrying the brazen little pussycat. But this vengeful kitty just wants to scratch his eyes out and disappear with his money and her virginity intact. Will she succeed or can he tame her? 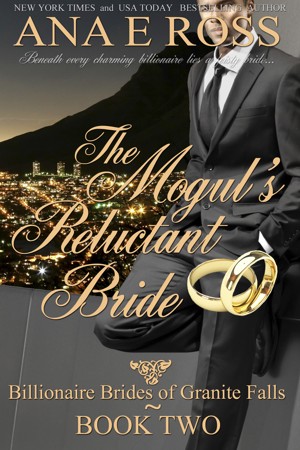 The Mogul's Reluctant Bride by Ana E Ross
Series: Billionaire Brides of Granite Falls, Book 2. Price: $3.99 USD. Words: 94,160. Language: English. Published: May 13, 2013. Categories: Fiction » Romance » Contemporary, Fiction » African American fiction » Romance
Bryce Fontaine is not above blackmail to keep his three recently orphaned godchildren in their NH hometown, so he tricks their aunt and legal guardian, Kaya Brehna, into a marriage of convenience. One nibble of Kaya's sweet lips and Bryce is yearning for more of his sexy little bride. Kaya quenches Bryce's desires, but does she have the power to free his heart from the nightmares that plague it? 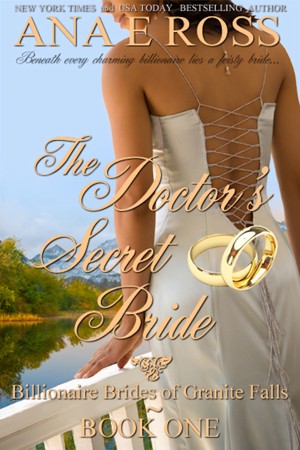 After lies, deceit, and secrets come to light, Erik must choose between loyalty to a dead woman, and the love burning in his heart for one who’s very much alive.