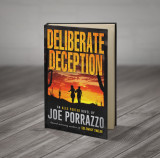 Published 2018-11-21.
Do you remember the first story you ever wrote?
Yes...wow...I haven't thought about that in years. I wrote a short screenplay in college for a writing class. It was called The Unknown Stranger. A kid went missing in a storm and a mine collapsed. It stalled a rescue, but then witnesses saw a ghost-like figure enter the mine and the kid came stumbling out. The class grade was based on the story and how my small group acted it out. It was a mystery, but we got a good laugh then...and even more now.
What is your writing process?
Well, I still work full-time for the Department of the Air Force. So I have to schedule a few hours a day...either early in the morning or in the evening. I usually think the whole plot through before starting to write. But when I do, I use an outline and I research as I go...but I don't start until I have a beginning and an ending. Unlike most authors, I also like to create the book title up front.
Do you remember the first story you ever read, and the impact it had on you?
Yes, I was a big Hardy Boys fan...and I read a lot of Don Pendleton's Mack Bolan books: The Executioner. But in my teens, I mainly read King, Grisham, Ludlum and then moved on to Hunter, Connelly, Baldacci and Flynn. But the novel that had the most impact on me as a teen was Stephen King's The Stand. It wasn't until John Grisham's The Summons that made me want to put words to paper.
How do you approach cover design?
That's a great question. I usually design my own cover until the story is nearly finished and ready for a professional cover. I like to design it to represent the whole story but that's not a very good idea. I designed about four covers for Deliberate Deception and the final doesn't mirror any of them. I found that my covers were giving away to much of the plot and in some cases providing spoilers.
What is your e-reading device of choice?
I think the Kindle is a great device...easy to use and mobile-friendly. But nothing beats the feel and look of a real print book...old school.
Describe your desk
That's a kinda personal question [chuckles]. But okay, it's an L-shape desk with dual monitors. I love writing but I'm not so crazy about the editing and business side of selling books. But there is no way I will ever edit another manuscript without using two screens!
Where did you grow up, and how did this influence your writing?
I grew up on the North Shore about 15 miles outside of Boston. A huge Sox, Pats, Celts and Bruins fan...you'll always catch sports references in my books. I received a lot of feedback from readers on how they loved the local descriptions and scenes in Solemnly Swear. Deliberate Deception takes place in Tucson, so we'll see how that one works out. They say to write what you know, so there's plenty of New England references and now Southern Arizona. I spent 25 years on active duty and I taught Air Force ROTC at the University of New Hampshire, so there you have it.
Deliberate Deception seems to have plots on top of plots, and the feedback so far is very positive..."a riveting story" for example. It even has the 2011 Tucson shooting, was that planned?
Thanks. No, I didn't plan on including the Tucson tragedy in my book. I started Deliberate Deception before the shooting happened. It was all timing as I was halfway through the plot when the story broke. I have a small TV on my desk and I monitored the story as I worked on the book. It was a few days later, when they announced President Obama was coming to Tucson, that it clicked and enhanced the plot. But it caused a lot of consternation for me...it was still too new, too fresh, too soon to write about the senseless tragedy. Almost eight years have passed, I'm hoping that's enough time to be able to use it in a fictional story.
Deliberate Deception is longer than Solemnly Swear...was that intentional?
Actually, yes, it was. One of the book critics of Solemnly Swear gave an awesome review, but mentioned that my compositional style would have kept his attention at twice the page count (it was 252 pages). Be careful what you ask for...Deliberate Deception has 416 pages in the print copy that is due out soon...the current ebook has 408 pages.
What's the story behind your latest book, Deliberate Deception?
As mentioned, I write what I know, or at least familiar with...I used the Tucson shooting. In the book's promotion I use the description: "A greedy corporation rigs a multi-million dollar raffle...what comes next will shock the world!" That's based on a few large raffles we have here locally in Tucson and Phoenix. I use my experiences to infiltrate the local Air Force Base, travel to Key West and Trinidad in the Caribbean...all places I've been to for different reasons. But allow me to read a line from the book: "References to real people, events, establishments, organizations, or locales are intended only to provide a sense of authenticity, and are used fictitiously." Sorry...couldn't resist.
What motivated you to become an indie author?
Simple, really, I work full time...and I write mainly for pleasure. Indie fits my needs, and it's certainly much easier now than it was in 2007, social media is priceless.
How has Smashwords contributed to your success?
Too soon to tell, but it's a great service and it was established by an Indie for fellow Indies.
Thanks for the time, and best of luck with Deliberate Deception.
It's been fun, thank you for the opportunity. Go Wildcats!
Smashwords Interviews are created by the profiled author or publisher. 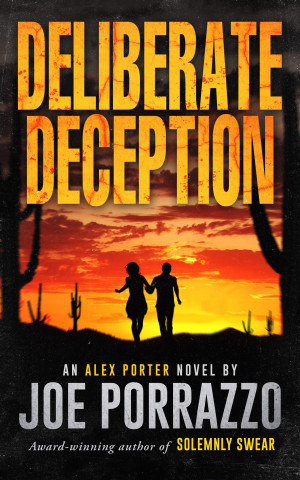