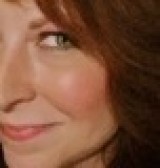 Published 2015-01-18.
Where did you grow up, and how did this influence your writing?
Much like my talented protagonist, Bobbi Lane, I grew up in a big house with nine siblings. It was chaos of the very best kind ... and it gave me much fodder for my stories and how I approach them.
Do you remember the first story you ever wrote?
It was a racy little tale -- or what my naive, young self thought of as racy at the time. I have very little recollection about the story now, but what struck me was how friends reacted to the way it was written. It was the first time I realized that how one presented a story, not just the plot, could make the difference between a story and an adventure.
What is your writing process?
Music is an important motivator. Since much of life has been spent making music, my stories center around it -- or at least take inspiration from it. Give some Rolling Stones or Foo Fighters and I'm in one righteous state o' mind, baby.
What do you read for pleasure?
Biographies: You just can't beat a real-life adventure/thriller/romance/tale of intrigue. Keith Richards' "Life" is a perfect example. His story is insane, so much so that if it had been written as a fiction, its credibility would be deemed dubious ... and the man actually lived through that life!
What motivated you to become an indie author?
Like most indie authors, I wanted to tell my stories the way I saw fit -- warts and all. I tell myself every day as writer, "Be fearless," and then let ideas flow freely ... without fearing what a publisher will demand later.
What's the story behind your latest book?
"Bobbi's Canon" centers around a beautiful musical prodigy who's simultaneously (and paradoxically) supremely confident and helplessly insecure. It drives her to make disastrous decisions about the people she surrounds herself with and the misplaced trust she often places in them. That, in turn, drives her to self-destruct.
What are you working on next?
I'm already hard at work on the sequel to "Bobbi's Canon," and it's already shaping up to be funnier, sassier, more violent, more tragic and more inspiring than the first one, of which I'm very proud. Bobbi is one hot mess, but she's a fighter!
Are you anything like any of the characters in your books?
There's always a nugget of truth in the characters and their actions in any fiction, and people will always speculate on how much of your fictional tale is rooted in real events. I'll never tell. While I'm most like Bobbi Lane in "Bobbi's Canon," it's definitely not a biographical work -- I was never and will never be as screwed-up, ballsy, reckless and plucky as she is.
Who are your favorite authors?
I know Stephen King is probably a common answer, but I love how he puts together a story. It doesn't even matter to me what the story actually is; I just adore how he words it. That knack is what give him the power to make you believe a story that would be ridiculous in any other author's hands. And that's most of the battle.
When you're not writing, how do you spend your time?
Reading, of course, but I spend a lot of time on music too. I'm a singer and songwriter, and I've spent some 25 years or so in and out of rock bands in the St. Louis area. Those experiences give me a unique perspective, and it lets my readers get a glimpse inside that intriguing world.
Describe your desk.
Mine is a writer's dream desk: U-shaped cherry wood, 24-inch dual monitors, a comfy leather chair and a large window to the outside. Best of all, there's usually one to three sweet dogs curled up nearby, keeping my feet and my heart warm. I can't complain!
Smashwords Interviews are created by the profiled author or publisher. 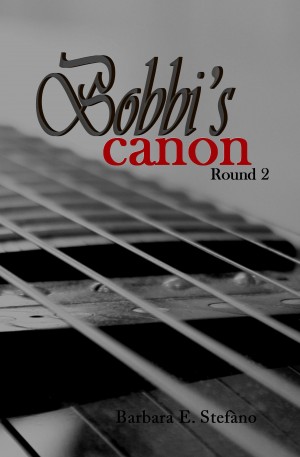 Bobbi's Canon: Round 2 by Barbara E. Stefano
Price: $3.99 USD. Words: 55,840. Language: English. Published: May 17, 2015. Categories: Fiction » Romance » Adult
On the heels of tragedy, entertainer Bobbi Lane defies Death to take her--but it's the duplicitous Mickey Green who finds her instead. The emerald-eyed beauty takes a leap back into the music she loves and a plunge into an ill-advised romance. No one could foresee what jagged dangers lie just over that cliff ... 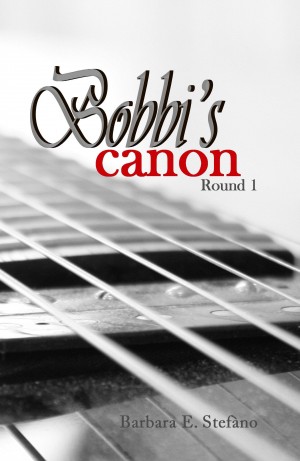 Bobbi's Canon: Round 1 by Barbara E. Stefano
Price: $3.99 USD. Words: 55,230. Language: English. Published: January 18, 2015. Categories: Fiction » Romance » Contemporary, Fiction » Romance » Adult
"Bobbi's Canon" delves backstage of the rock-band scene and follows a young, talented musician, Bobbi Lane, who swiftly and surely runs her life right off the rails. Sex, booze, bad decisions and, of course, rock 'n' roll: It's got all the deliciously naughty elements any fan of music and tragi-comic fiction is sure to enjoy.