Published 2014-09-29.
What do you read for pleasure?
I like to read YA best because it's where my head lives (I never really grew up!). I have no interest in the whole "controversy" about whether it's okay for adults to read YA or not. That's silly. A person should read whatever books speak to them, whatever books interest them. So I like YA, usually fantasy or comedy but I'm open to anything. I also like horror, but not slasher, eww — CREEPY is the way to go. Stephen King and H.P. Lovecraft are my creepy favorites. I dip into wacky romance once in a while, too. Other than that, I read whatever looks good.
What is your e-reading device of choice?
Frankly, I like physical books best! Nothing beats the smell of a book and the feel of turning pages — ooo, love it! But I once had a Nook, and that was good till it broke. I also have an iPad, and that's comfy to read on. I'm thinking of getting a Kindle soon.
What book marketing techniques have been most effective for you?
I'm just starting out, so I don't know yet! I'll try anything! ...Well, almost anything.
Describe your desk
I love my desk! I've had this same desk for my entire writing career. It's an old teacher's desk that my husband found for me at a used furniture store in San Diego around 1985 or so. It's a huge hulk of a thing, with drawers and what I call pully-outies on both sides (those little pull-out shelves, whatever they're called).

When I die and am cremated, I want my desk burned with me.
When did you first start writing?
I think I was born writing. Honestly, I don't remember a time when I didn't want to be a writer. I have no idea where it came from. I'm going to be posting early writings on my website now and then — I'm talkin' my childhood diary entries, gradeschool poetry, all that. I think readers like to see what dorko stuff we writers started out doing before we got our acts together, and I saved all that old stuff. Come look. Laugh at me. I don't mind. I'll be laughing harder than you will!
What motivated you to become an indie author?
I had "Hooked" ready to go years ago, but not long before that my agent had decided to quit the business and do other things. So I had a novel and no agent. I tried to get another agent, but I'd been through that before — it can take forever even if you have connections in the business. And frankly, my long and varied resume works against me because agents often prefer writers who stay in one or two genres. They want to build a definable audience for their clients, and I understand that. Me? I'm all over the map with credits in comics and chapter books and YA and animation and advertising and cheesy merchandise and whatever else, and now a dark fantasy/horror? So I decided that maybe I belong in self-publishing where I can control my circumstances. Well, to a degree, at least!
Do you remember the first story you ever read, and the impact it had on you?
I don't remember the first story, but I remember very early ones. I adored the Peter Rabbit books and anything by Dr. Seuss. I remember just hugging them in the library when my mom would take me there. And I have clear memories of going bananas when I got new storybooks for Christmas, one of them called "The Golden Stallion." Yeah, I was a horsey girl for many years, "Misty of Chincoteague" and all that. My older sisters had a Shirley Temple fairytale book with amazing illustrations that just made me go gaga. The impact those books had on me was enormous. I can't describe it, really, because I was so little, but I remember that I wanted to be a part of them somehow, to live in them — not in the stories but in the books themselves. I think that was later translated in my brain to "I want to write stories, too!"
What are your five favorite books, and why?
Well, my list of "favorites" changes all the time. But at the moment, I guess this will suffice:
1) "Peter Pan" by J.M. Barrie. If you can't figure out why, well, all my book promotion has been for naught.
2) "Pet Sematary" and "Christine" by Stephen King. It's a tie here, because they're both hyper creepy and I LOVE creepy!
3) Anything by H.P. Lovecraft, father of modern horror. He mostly wrote short stories and novellas, so I'll consider his entire body of work as one big creepy book.
4) "The Door Into Summer" and "Tunnel In the Sky" by Robert A. Heinlein. Again, these two books are a tie. I first read them as a young teen, during a time in my life when I wanted to be a writer so badly I actually cried about it. These books encompassed everything I wanted to write — grand adventure with amazing characters and amazing worldbuilding, all delivered in a light prose tone that intensified heavy subject matter. That was exactly what I wanted to write, so I hope I'm accomplishing that goal!
5) Oh, let's see... "The Haunting of Hill House" by Shirley Jackson and "The Hitchhiker's Guide to the Galaxy" by Douglas Adams and "Black Beauty" by Anna Sewell and "Bambi" by Felix Salten and... I'd better stop here. :)
What is the greatest joy of writing for you?
Escape. I'm not a big fan of reality. I know that's a rather stupid thing to say, but it's true. I rarely want to be wherever I am — I'd rather be in some fantasy land. I've pretty much hated every job I've ever had except writing or jobs related to writing/books/Hollywood/movies/etc. If given free time, I write or think about stories and writing. I once told my mom that I've never defined myself as a "person" but as a "writer" — ooo, she didn't like the sound of that, but it's true. If I can't write, I don't feel like I exist. I've stopped wondering about any of this and now just accept it. If there's a Writing God out there, he/she/it has got their eyeballs on me.
What do your fans mean to you?
Fans are everything. Without fans, I'm not much of a writer. Back when I made my living writing Disney comic books, I would get fan mail from little kids. They were so cute! And I felt privileged to tell them stories that encouraged them to read. I even got a letter from a dad once who said that his little son wouldn't read at all until he found my "Tail Spin" comics. He loved the show, so now he was starting to read. THAT is major coolness. But basically, I just want to entertain.
Smashwords Interviews are created by the profiled author or publisher. 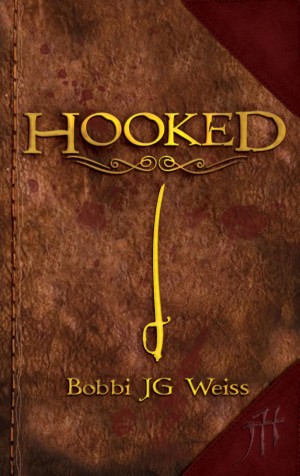 Hooked by Bobbi JG Weiss
Price: $4.99 USD. Words: 175,740. Language: American English. Published: September 28, 2014. Categories: Fiction » Fantasy » Contemporary, Fiction » Horror » Weird fiction
He is not Captain Hook. His name is Jonathan Stuart, and he doesn’t want to be in the Neverland trapped aboard the Jolly Roger with a horde of greedy pirates. He was tricked there by Peter Pan. Why? He'd better figure that out and escape before his mutating memories insist that he actually belongs in this nightmarish children's paradise. No, he is definitely not Captain Hook. Well, not yet.