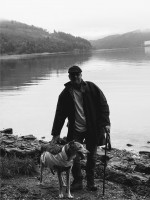 This interview has been viewed 170 times.

Published 2019-12-02.
Do you remember the first story you ever read, and the impact it had on you?
Not quite the first story. I remember finishing my first full length book but sadly not what it was about. The first stories that really stuck were Shardik by Richard Adams, and Tess of the d'Urbervilles by Thomas Hardy. By then the door was fully open. Interestingly I've just re-read Shardik after forty odd years... and fallen in love with the story and the storytelling all over again.
When did you first start writing?
Telling stories has just been one of those things that I do. I can still remember clearly a number of those primary school essays that we had to write on a Monday in English classes - 'What I did on the weekend...' - mine were usually full of submarines and Vikings and tigers - pure Walter Mitty escapades. Fiction was just always there. I sort of lost the plot a bit during my teenage years, apart from a bit of dodgy poetry writing, but the habitual fantasising turned into something more concrete once I found my adult feet.
Do you remember the first story you ever wrote?
The first proper piece of fiction that I wrote was around 1997 and was called 'Bears'. The story was based on the premise that childhood teddies are brought to life by the unconditional love of their human playmates. There was a but, of course... those same teddies, given the experience they shared at the hands of their human playmates, dare not show the world that they are alive - A mash up of themes picked up in Toy Story and Ted, perhaps.

The story was set when a now grown up child announces to her partner that she is pregnant and is overheard by one of her fondly kept bedroom bears. Those bears still in one piece decide that they have to leave and the story follows their adventures as they try to make their way to a fabled teddy bear museum, which they believe must be a sort of stuffed animal heaven.

As a first attempt at a long piece of fiction goes... it was awful, but I learned a lot.
What are you working on next?
There is a sequel to A Solitude of Stars. The Apparat / Dirigiste stories are largely done, and I intend to expand on the Arkland themes, but I'm not likely to finish for a while. Fireside Tales are progressing and I do expect to see a few more editions coming to light there. And then there's a fantasy piece that's been bubbling for quite a while, and... and... and... Oh, there's the day job too...
What inspires you to get out of bed each day?
Sounds a bit cliched, but it's the fact that every day is different and a chance to learn something new. I've always been generally positive, but I think that a series of long discussions with my late wife about how fragile life is and the basic obligation that we have to ourselves and to our family and friends to live this life well - I think that has played a big part in my outlook these last ten years or so. I try to stay as true as I can to that shared way of looking at each day.
When you're not writing, how do you spend your time?
Working - the day job is pretty involved and I travel a lot (and write on longer train journeys). Aside from that we are doing up yet another old wreck of a house, this time a keeper, though. Gardening has become a thing - always have done, but this new project house is basically a blank slate as far as the outside world is concerned. Good food & restaurants when we get the chance. Love a night out at the cinema. Getting into 'twitching' with my partner as well, so we spend a bit of time down at our local wetlands at Slimbridge. Life is too short to ever be unintentionally bored...
How do you approach cover design?
More carefully these days than perhaps I once did - and some of the covers here on Smashwords are in need of improvement. I've recently invested in some proper design tools and I'm getting to grips with Adobe Creative Cloud. Love the process but am definitely an amateur when it comes to graphics.
What are your five favorite books, and why?
Just the five? Oh well, here goes...

Shardik - mentioned previously - loved this first time around and it still moves me. Great writing.

Tess of the d'Urbervilles - how can you not love Thomas Hardy. He speaks to my soul and I can lose myself in his storytelling so easily

Cry the Beloved Country - a book that opened my teenage eyes to a world so far beyond anything I had ever imagined. It stays with me to this day.

Norske folkeeventyr (Norwegian Folktales) - I've read and studied so many collections of folklore and fairy tales, and this one stands out for me - I just love the stories and the world they create in my head. So many favourites but Asbjørnsen and Moe definitely cut the mustard.

Das Boot - Moved me to tears and inspired my own work. Transcript, the opened in A solitude of Stars, is, for example, a personal tribute to Lothar-Günther Buchheim.
What do you read for pleasure?
Simple. Anything good... I love discovering new stuff in any genre. Great writing is great writing, full stop.
Smashwords Interviews are created by the profiled author or publisher. 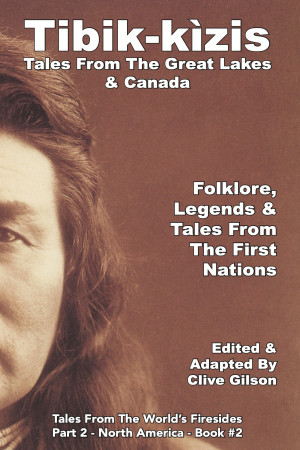 Tibik-kìzis - Tales from the Great Lakes & Canada by Clive Gilson
Series: Tales from the World's Firesides - Part 2 - North America, Book 2. Price: $3.99 USD. Words: 77,010. Language: English. Published: November 8, 2019. Categories: Fiction » Fairy tales, Fiction » Literary collections » American / General
These tales are a selection of those told by the tribes & peoples of the Great Lakes & what are now largely Canadian provinces, mostly collected during the mid to late nineteenth century. Folktales have been a part of the social & cultural life of Native American regardless of whether they were sedentary agriculturists or nomadic hunters. 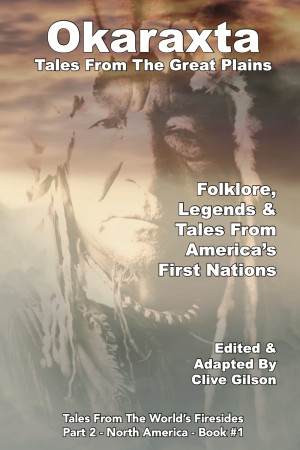 Okaraxta - Tales from the Great Plains by Clive Gilson
Series: Tales from the World's Firesides - Part 2 - North America, Book 1. Price: $3.99 USD. Words: 99,350. Language: English. Published: October 23, 2019. Categories: Fiction » Fairy tales, Fiction » Literary collections » American / General
There are many sources & traditions within Native American storytelling & mythologies. These tales are a selection of those told by the tribes & peoples of the Great Plains, but by no means does this book cover all aspects even within just this sub-group. It's been one of the absolute delights of the summer discovering just how deep & rich are the veins of folk & tribal lore across the Americas. 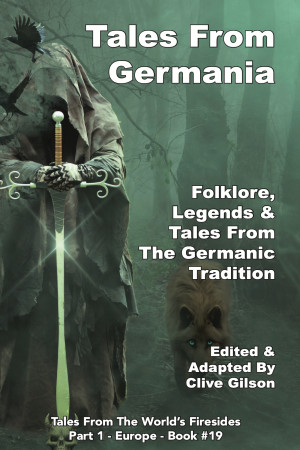 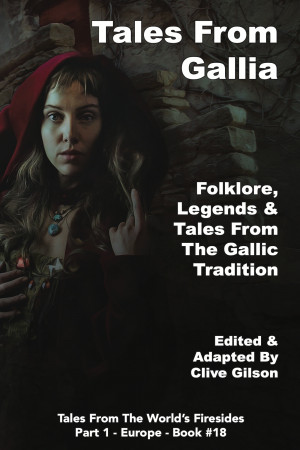 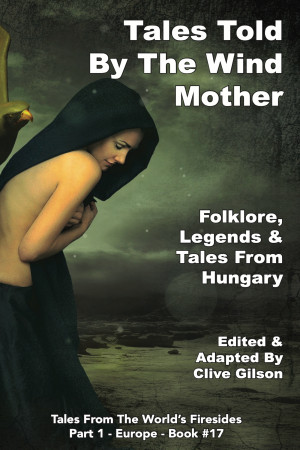 Tales Told By The Wind Mother by Clive Gilson
Series: Tales from the World's Firesides - Part 1 - Europe, Book 17. Price: $3.99 USD. Words: 97,420. Language: English. Published: May 13, 2019. Categories: Fiction » Fairy tales, Fiction » Literature » Literary
Folk & Fairy Tales, Legends, Myths & Sagas from the Hungary & the Magyars tradition. Here we have the next collection in the series Tales from the World's Firesides. This collection mines the rich seams of folk and fairy tales from the Magyar tradition. 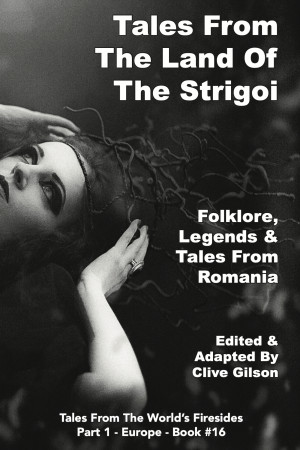 Tales from the Land of the Strigoi by Clive Gilson
Series: Tales from the World's Firesides - Part 1 - Europe, Book 16. Price: $3.99 USD. Words: 116,160. Language: English. Published: April 5, 2019. Categories: Fiction » Fairy tales, Fiction » Literary collections » European / Eastern Russian & Former Soviet Union
Folk & Fairy Tales, Legends, Myths & Sagas from Romania These are some of the most engaging stories that I’ve collected together for a long time. The Romanian folklore tradition has a vitality that really shines through in these traditional tales, and I’m sure, like me, you will fall just a little bit in love with some of these wonderful characters. 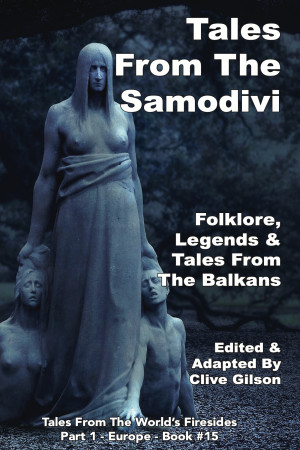 Tales from the Samodivi by Clive Gilson
Series: Tales from the World's Firesides - Part 1 - Europe, Book 15. Price: $3.99 USD. Words: 60,640. Language: English. Published: March 8, 2019. Categories: Fiction » Fairy tales, Fiction » Literary collections » European / Eastern Russian & Former Soviet Union
Folk & Fairy Tales, Legends, Myths & Sagas from the Balkans. The Balkan Peninsula is a region in South-Eastern Europe, and has a full and rich history and tradition where cultures have been mixing for at least 2,000 years and Slavic civilisation has had an especially strong influence. The result is diverse and fascinating folklore with its own set of mythical beings and legendary heroes. 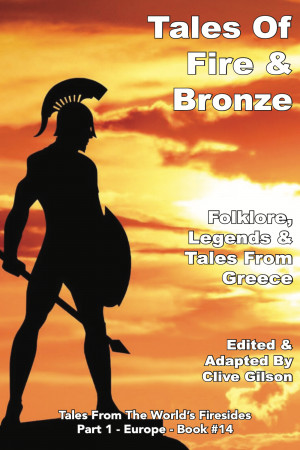 Tales of Fire & Bronze by Clive Gilson
Series: Tales from the World's Firesides - Part 1 - Europe, Book 14. Price: $3.99 USD. Words: 92,920. Language: English. Published: February 23, 2019. Categories: Fiction » Fairy tales, Fiction » Literary collections » European / General
Folk & Fairy Tales, Legends, Myths & Sagas from Greece Myths and tales from Greece. The Greek myths were initially an oral-poetic tradition of epic proportion. As ever, it’s been a delight and an education to read and work with these stunning texts. I hope you enjoy them too, for as the final line of The Golden Crab says, “And then they lived happily, and we who hear the story are happier still.” 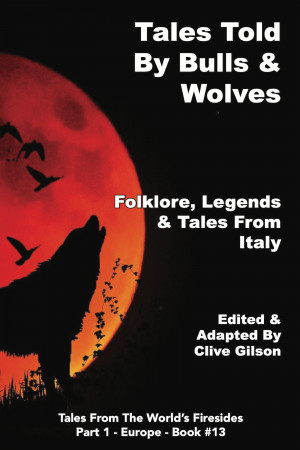 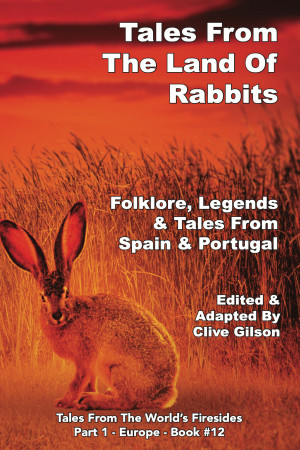 Tales from the Land of Rabbits by Clive Gilson
Series: Tales from the World's Firesides - Part 1 - Europe, Book 12. Price: $3.99 USD. Words: 88,090. Language: English. Published: January 3, 2019. Categories: Fiction » Fairy tales, Fiction » Literary collections » European / Spanish & Portuguese
Folk & Fairy Tales, Legends, Myths & Sagas from Spain & Portugal These first tales herald from Spain & Portugal, from a broad set of sources and translations. There is a real flavour of the peninsular in these stories, reflecting as they do Spain and Portugal’s long history of thought, religion and conflict. I hope you enjoy these stories.
View their profile to see all of their books