Published 2015-11-14.
Who are your favorite authors?
My absolute favorite author is Stephen King. From horror to fantasy, he's kept me awake and quaking on more occasion than any other author. I know it sounds like such an easy answer; but King truly is the king of modern fiction.

My first, and therefore important, fantasy author was Susan B. Cooper, with her The Dark is Rising series. That book was responsible for my never-read The Dark Lord book, which I started at the age of thirteen...and it was horrible.

There are two authors I keep trying to mix up, and both are wonderful writers. Eric Van Lustbader was responsible for introducing me to The Ninja, Mako, and Jian. Wonderful martial arts books for martial arts lovers like me.
The other is Brian Lumley, author of the Necroscope series which, if you don't know, is about vampires and a man(?) who can speak with the dead. Though I plan to, I never finished all his books.

Last of my favorites, Tad Williams. The first book I read by him took me three years to read...but once I was through the setup novel, I couldn't put his series down. Otherland was such a loooong read. No other book has been more worth working through in my entire life, the series following Otherland is amazing, tight, and full of mystery.
When you're not writing, how do you spend your time?
If I'm not writing, I'm drawing. If I'm not drawing, I'm playing videogames. Recently, I discovered I have a knack for making Minecraft videos and have my own (sagging and sad) channel on YouTube now: ComicCraft. If I can get my schedule right, I'll start doing those again.

Outside of that, I am a father. My daughter keeps me busy by being smart enough to be on the Robotics team at her school. She loves the fact that, when she talks about math, I have little clue as to what she's speaking about.

My son, on the other hand, is more along my line of thought: he wants to be as fast as The Flash. Y'know, the superhero? At the age of five, I hope he doesn't reach those kinds of speeds just yet.
Do you remember the first story you ever wrote?
I sure do...it was an absolute mess that took the Chosen One trope and tried to mesh it with a supernatural/ martial arts story. Titled The Dark Lord, a demon who wanted to take over Earth before Satan was making moves before the Dark Lord himself could escape his 1,000 year cage. The hero was a young boy with a clairvoyant sister, who received a magic sword from an old man claiming to know the hero's father...and who also trained him in martial arts.

Come to think of it...maybe I should take another stab at this one. What do you think?
What is your writing process?
I write with Microsoft Word. I know there's Scrivener and yWriter and all that, but I understand Word.

My process involves plotting using an outline for the basic story, then using Campbell's Monomyth System to bring in the hooks. I also use D&D tables to decide on character quirks and habits. The main thing is to write. Put something either on the computer or on a sheet of paper every day. I'm constantly trying to find new reasons to write...love letters to my fiance, writing fun little stories with the help of my kiddos, blogging, whatever needs to be done to write at least a few words every day.
Do you remember the first story you ever read, and the impact it had on you?
I remember the first stories I read were Greek mythology, but I don't remember which specific myth I read first.

The impact it had on me was that I realized no single entity can be 100% perfect. This has followed me into my own writing, my characters are flawed in serious ways that impact how they work through the problems I put in front of them.
How do you approach cover design?
I know my art isn't the greatest on Earth, but I have a history in graphic design. I use the tools I learned in high school vo-tech in developing how shapes come together on my covers.

One day, I'll have earned enough money to hire somebody else to paint mind-blowing covers, and honestly, I can't wait to see what they come up with.
Describe your desk
Ha, this depends on what day it is and what exactly I'm doing. If I'm writing a novel, I have one or two notebooks in front of me, a world map, and maybe a couple of loose-leaf notes floating around. If I'm drawing a comic, it's a single stack of about fifteen sheets of copy paper because my desk has pivots in it.

Other than that, the regular stuff: pens, pencils (mechanical), erasers, an Xbox controller, my fiance's nail-file, and of course, the PC itself.

Bet you wish you had my epic desk, right?
When did you first start writing?
I drew pictures as a kid. Stuff like demons, Venom (from the Spiderman comics), and other scary stuff that made my dad wonder what the hell was wrong with me.

I started writing as homework assignments in like...I dunno, fifth grade? That's when my English teachers started requiring a one-page story using all of our spelling words. I always got A's on those stories, and in my first year of junior high, I got my first ever A+.

As far as writing for myself, I started a journal when I was eleven years old, and wrote my first short story when my family got our first computer the next year. At thirteen, I made my first attempt at writing a novel.
What's the story behind your latest book?
My latest book centers around an orphaned boy who learns he has the power to "paint" things from his imagination into the real world. Facing his father, he learns a few things he doesn't really want to know, and must make some big decisions about who he is going to become going forward.

The story also introduced the Crimson Knights, divinely gifted dispensers of justice. In this story specifically, there is Carghen who will become the central figure of my upcoming series called Knightfall.
What motivated you to become an indie author?
I just needed to get a book out there. That was the dream, to be published.

Now, I want to prove I'm good enough to make a dent. I don't need to be the next JK Rowling or anything, but I'd love if the Knightfall series got covered at least once in a major media outlet.

And that comes by getting better. Of Blood and Blade is good, Paints the Invisible Eye was better, and I don't intend to regress now.
What is the greatest joy of writing for you?
The greatest joy of writing is seeing the emotions you intended to pull from your readers cross the features on their face. That's when you know you've got something special. There's no better feeling than hearing somebody tell you that your villain is right up there with the worst villains they've ever read, or that you made them cry when a character went through a particularly tough choice. It's magic, and intoxicating, and I want to deliver that into people's lives for the rest of mine.
Smashwords Interviews are created by the profiled author or publisher. 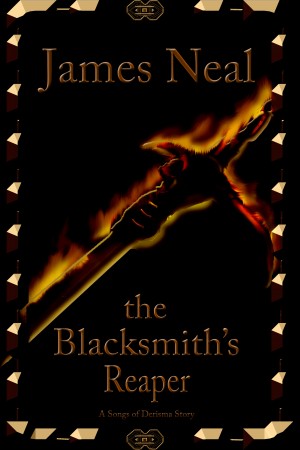 The Blacksmith's Reaper by James Neal
Price: Free! Words: 6,030. Language: English. Published: April 19, 2016. Categories: Fiction » Fantasy » Dark
A dwarf blacksmith is given the task of creating an amazing weapon meant for a future warrior. In the process, he discovers what life has hidden from him when he was part of the world. These revelations are as melancholy as they are enlightening. 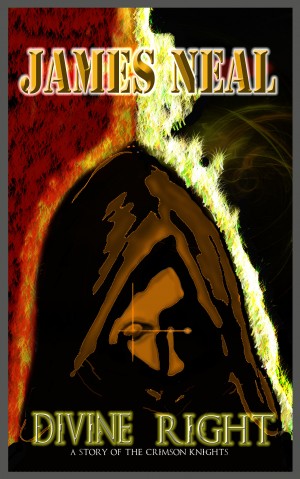 Divine Right by James Neal
Price: Free! Words: 3,760. Language: English. Published: November 14, 2015. Categories: Fiction » Fantasy » Short stories
Jon Carghen meets one of his sisters-in-arms, Evelyn, who has bad news for the pacifist Crimson Knight. He is being hunted by his own kind. The decision he must make is dastardly at best, but what choice does he really have?