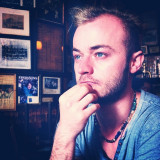 Published 2017-03-22.
What is the greatest joy of writing for you?
The sensation of flying. When I'm really involved in the story and my ego is suspended enough that characters start borrowing my face to figure out how they feel about things. When I'm in public and I'm seen sitting in front of a page, mulling over the words and being asked why I look so intense, or murderous, or angry. Being able to answer that, no, none of those things, I'm simply trying to remember how to fly.

The best part about writing, in my opinion, is that you never really master the thing. You're always trying to remember how to do it. The enthusiasm is usually there, but the ability sometimes isn't, sometimes the words are gone. When you aren't in that skill-space you go back to line editing or worrying about deadlines or otherwise occupying yourself with the technical, non-creative aspects of being a writer. But you know that eventually (usually when you least expect it) what you're working on is going to grab you by the navel and throw you right back up into the clouds and all at once you're back to flying.
Describe your desk
My desk is my lap, wherever my lap happens to be.

I think there is an element of entrapment involved in establishing a writing 'desk'. Nothing is more frightening to a writer than a blank page, and nothing is more terrifying than completing that perfect writing space that we dream of. Because once we finally build that perfect place we have no more excuses to not sit down and write something.

Writing has to be about writing, not about the place we can find the clarity to write. We can endeavor to find silence, or peace-of-mind in order to concentrate, but for most writers that must come from yourself, not from your surroundings. There will always be reasons not to write. I think the most useful discipline to nurture is to write in spite of distraction, in spite of your silence not being absolute. If we allow ourselves to believe that the space we're in determines our ability to write, we find ourselves hiding at our desks confronted by a blank page that is unwilling to make itself interesting.
Who are your favorite authors?
I identify with a lot of different storytellers, to innumerate quickly: Brian Jacques, Dianna Wynne Jones, E.B. White, Neil Gaiman, and J.K. Rowling all on the shortlist, but as a student of writing I have to pay homage to a lot of extraordinary writers like Dickens, Poe, Hemingway, Stevenson, et al.

It's really hard to say who a favorite author is, as an author, because it's more than just being a fan at that point. These are the people who struck such an intimate chord with you that they grabbed you by the ear and sat you down to work.

But my favorite author, if I'm really answering the question, might have to be the Poet/Philosopher David Whyte, simply because he's the one on my list I have actually managed to meet in person, and who, arguably, impacted me in the most significant way.
When you're not writing, how do you spend your time?
I'm a wandering writer, I kind of branded myself that way even though it has little to do with what I actually write. I travel a lot, and have since I was twenty, even though I've never yet written a travel article. For some reason I am unwilling to write about my experiences, even when I try, those adventures are internalized. I do, however, expect them to sneak up on me and influence my stories as I go along.
Where did you grow up, and how did this influence your writing?
I grew up in the forgotten parts of Los Angeles working as a film and T.V. actor. From the age of four until my teens I spent my afternoons in casting studios or on sets after school (or, at the best of times, instead of school) but a great deal of that time I was sitting in a car on highways, staring out at the endless grey of Los Angeles.I attribute this upbringing to my writing in two ways.

First, as a child confined to a car. I listened to music and audiobooks, staring out the window, lost in thought, and lost in fantasy. This nurtured my creativeness in a huge way. I entertained myself. I think most writers and actors have to have that ability; the impetus to create things that fascinate you, and are real enough to keep your attention.

The second way this attributed itself to my storytelling is that I grew up surrounded by actors. Actors have an amazing ability to connect with fictional characters and empathize with them. That was my earliest education in character study and storytelling. I learned from some of the best what it means to dive into the make-believe, and discover real drive and impulse.
Do you remember the first story you ever wrote?
The first one I wrote and the first one I finished are both important to me and have neither of them seen the light of day in their entirety.

I started writing an epic fantasy when I was in my early teens. Then I read Harry Potter, and decided I wanted to change focus away from fantasy and try something (in my mind) new. When I was about sixteen, my closest friend and I were looking for things to spend our time doing besides following in the footsteps of our circle of friends, who were mainly devoted to doing a lot of drugs and having babies by accident. He was an excellent artist, and I had grown up doing film in Hollywood and spent my life reading scripts, so I suggested that I could write an outline and he could draw it, and then we could make our own comic book. Over the next couple years we spent thousands of hours at coffee shops between college hours, and part-time jobs, and somehow we still managed to spend about 3-5 hours a day sitting at a table, drinking coffee, creating our post-apocalypse world. While he took his time, I grew impatient and the outline became a screenplay, became a novel, and then became a Tolkien-esque anthology of post-apocalyptic swashbuckling.

While still in my teens I was given the opportunity to pitch the idea to a senior editor at HarperCollins. The feedback I got was that it was great, BUT there was no market for that kind of crap, and that I should look into publishing it myself. Then Hunger Games came out. I asked again if there was no market and the response was, well, yes, a year ago, but now the post-apocalypse trend has run its course so you're too late.

When I was twenty-one I met Michael Crichton's former publicist (just after Crichton's untimely death) while working as a bartender in Los Angeles. He provided me with my education in the reality of modern book publishing. He read my manuscripts and advised me. I went back to my roots with the intention to build a career for myself, and the next thing I wrote, Hollo, became a book.
Smashwords Interviews are created by the profiled author or publisher. 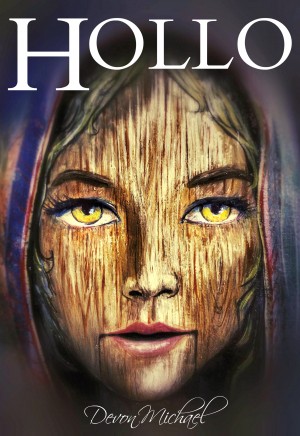 "Full of intricate details that spill off the page like spun gold, this whimsical tale will delight any reader with an interest in craft or magic." The BookLife Prize "An artfully told, dark, and frightening coming-of-age tale with a twist." Marian Thorpe - Bestselling author of Empire's Daughter