Interview with E. A. Barker

Published 2016-10-11.
What's the story behind your latest book?
Ms. Creant: The Wrong Doers! resulted from my research into female menopause which I initially undertook to better understand a new female friend. My findings impacted me in a profound way. I began to analyze the behavior of all the human females I had known or had relationships with utilizing this new information. Patterns began to emerge requiring still more research. Ultimately after two years, I had produced an eight chapter guide to women written primarily for my two nephews who were in the early stages of committed relationships. The stories were often painful to write as you relive each experience as you type. It became an exploration of myself as much as it was about some of the women I have known. My alpha readers convinced me to take it farther and encouraged me to publish it. It would be another two years before the greatly expanded and indexed manuscript would be ready for the publisher.
When did you first start writing?
The first time I got the writing bug was when the Canadian government invited its citizens to write into a forum on Canada's future. This was long before I had a personal computer so everything was hand-written. There were papers everywhere throughout my apartment as the words just poured out of me. At times I could barely keep up. I naively set out to tell our federal government how things should be done. The feeling of someone writing through me would not happen again until I began to write Ms. Creant: The Wrong Doers!
What motivated you to become an indie author?
There are actually two answers to this question which I will share. The first answer is: Traditional publishers were not even remotely interested in a controversial nonfiction book from a new author lacking a PHD. The second is: I was forced by a physical impairment to find a new career which would be far less physically demanding.
What is the greatest joy of writing for you?
The writing itself. Just you and your laptop spewing words over a page until a story emerges. Unfortunately, the time spent in that activity is relatively small when compared to all the things which are less enjoyable. As an indie-author you will have to manage or participate in almost every aspect of a publishing business almost entirely by yourself. Social media, e-mail accounts, editing, cover design, interior layout, proofreading, marketing, shipping, and multiple sales/distribution sites like Smashwords will demand most of your time in the early stages.
What do your fans mean to you?
They are a really cool bunch. They have faithfully followed the often painfully slow progress of Ms. Creant: The Wrong Doers! --never giving up on it and always encouraging me towards the finish line. I could not have done it without them.
What are you working on next?
(Smiles and chuckles to himself. . . ) I am invested in a one year marketing campaign in support of Ms. Creant: The Wrong Doers! There will be a long vacation somewhere along the way as well. After that I will assess the viability of continuing to work as an author.
Who are your favorite authors?
This is a trap. If I forget someone, there will be hurt feelings so I will duck this question by telling you which author has had the greatest impact on my thinking: Robert Heinlein.
What inspires you to get out of bed each day?
Coffee.
What is your writing process?
I never suffer from writer's block. I ALWAYS seem to have something to say. (sarcasm) This being said, I have a "just start writing" approach. It does not matter where I left off or what chapter needs the most work. I write and figure out the plot line later. Ms. Creant: The Wrong Doers! has many underlying concurrent themes so in the assembly of the book I asked a few simple questions: 1) Does this section belong where it is or is it better suited somewhere else? 2) Is this section necessary? 3) Is this section redundant? Answering these questions honestly caused me to hack out 10,000 words and write three additional chapters.
How do you approach cover design?
I had it relatively easy. I actually took the front cover photo on a $50.00 cellular phone. It was cropped and enhanced by professionals. I searched for a font that I liked and sent a mock-up to my publisher. After several minor adjustments we had a cover. I wanted a book cover that could be read from ten feet (3 m) away. Both the paperback and hardcover books are 8" x 10" with a large print interior for readers like me who are over forty.
Smashwords Interviews are created by the profiled author or publisher. 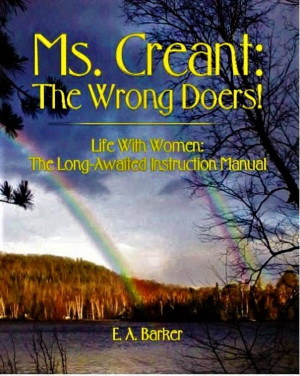