Published 2015-05-24.
What are your five favorite books, and why?
Gosh! Have I even READ five books? Seriously, I am a very slow reader, and so I have not read much. I often joke about having written more books than I have read. In fact, my all-time favourites are Tom Sawyer and Huckleberry Finn. We read Charles Dickens in school, and they were great books, but just too complex grammatically for me to really enjoy reading them. A Tale of Two Cities is one of the best.
What book marketing techniques have been most effective for you?
One-on-one direct marketing. I have a few close friends/fans who promote hard copies of my books the same way I do, which is to offer them to people on the streets for whatever they wish to donate for them. I've always received enough to cover the cost of printing more of them, and when there are profits, I have been able to use them to subsidise the Easy English books for schools in Third World countries. In 2014 I was able to get out over 400,000 books in those two ways (street distributing and subsidised books in schools).
Describe your desk
My desk has, for many years, been an Apple notebook on my lap, as I sit up in bed. I live with my wife in a decked out bus that does not have a proper table. We travel all around the country in it, offering our books to the general public wherever we happen to be each day.
Where did you grow up, and how did this influence your writing?
I was born into a largish family (six kids) in Rochester, New York, but we moved to California when I was about 11.

I enjoyed writing in high school (although my wife was editor of the school paper, whereas I was only a reporter!) and I did a column for the local newspaper. In my final year of high school, I was joint winner of an essay competition (the prize being a trip around the world) against all newspaper boys in the U.S.

My family was very religious, which led me to get deeply involved in religious issues. My parents eventually became Salvation Army officers after I left home for college, whereas my own spiritual journey took me into many different aspects of Christianity, with both good and bad experiences in all of them.
What's the story behind your latest book?
At the moment my latest book is a Swahili translation of "Survivors", which I'm a bit nervous about, because I do not understand Swahili, and had to trust a friend with the translating. We came in contact with many people who spoke Swahili through our experiences in Africa, and this seems to be an audience which is keen to read books being offered for free. The final book ("Destroyers") in the end time trilogy is set in Africa, and relies heavily on our experiences while there.
What motivated you to become an indie author?
It started with me reading the Left Behind series by Tim LaHaye and Jerry Jenkins. I wrote critical reviews after each new volume came out, and finally thought that I could do a better job of it myself, since LaHaye and Jenkins had a great idea, but seemed to be missing the point in a lot of what they were saying. My first attempt, Survivors, has sold over a million hard copies, just by offering them to people on the street for whatever they were prepared to give as a donation.
How has Smashwords contributed to your success?
It appears that a few thousand people have downloaded my books through Smashwords; but I have not really done much to promote them online. So at this stage, they are still going out much more quickly in hard copies (about 4,000 per week of all titles). Nevertheless, it is great to have this site to point people to, especially when they write from overseas wanting me to post a copy to them. It saves a lot of postage to be able to give them this contact.
What is the greatest joy of writing for you?
I guess it's a little like mountain climbing, where the pleasure is writing itself. When writing, I can work on organising my thoughts in such a way as to be more easily understood (than what happens when I try to speak off the cuff). And the greatest pleasure comes from people being able to understand what I have said. It's one reason why I am somewhat obsessed with simplicity in what I say... whether it's religious books or Easy English novels.
What do your fans mean to you?
Surprisingly few fans contact me after reading the books, in comparison to the number of books that have gone out over the years; but I try to respond to all of them. Of course, the friends who have helped me to get the message out are the kind of "fans" that most others would give an arm for. Without them, so much of what I have said would have never reached the general public.
What are you working on next?
I have an idea for another series to start AFTER the return of Christ, where characters in the New Jerusalem set out to teach those survivors left living outside the Holy City how the world should properly function under a truly godly government. I think it would be a great medium for communicating a lot of fundamental Christian concepts. The big question is whether or not my ageing brain (I'm 70 now.) will be able to handle all the information that is necessary to juggle when putting together a full-length novel. We'll see...
What inspires you to get out of bed each day?
I really do like to get out on the streets with my books, although I have to confront my fears of rejection each time I do. Nevertheless, I am always amazed at how trusting the general public are, in terms of taking the books, and often sharing their satisfaction with what they have read when I meet them later. At the end of the day, if I have distributed 50 books to people, I feel it's a truly profitable day, and well worth having crawled out of bed for.
When you're not writing, how do you spend your time?
I've already mentioned distributing the books themselves. However, I'm a fanatical (though mediocre) chess player and sudoku fan. I like spending time with my grandchildren, and Cherry (my wife) and I play cards a lot.
Smashwords Interviews are created by the profiled author or publisher. 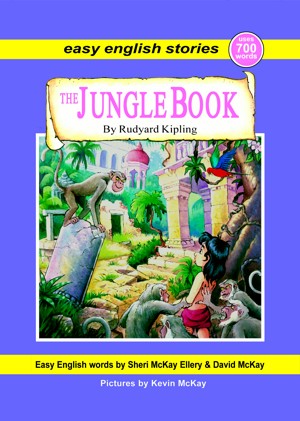 The Jungle Book - In Easy English by Sheri McKay Ellery & Dave Mckay
Price: Free! Words: 24,850. Language: English. Published: November 5, 2020. Categories: Fiction » Classics, Fiction » Children’s books » Action & Adventure / Survival Stories
Mother and Father Wolf find a baby boy after his parents are killed by the cruel Tiger Shere Khan. Baloo the Bear teaches him the languages of the Jungle, and Bagheera the Panther protects him from the many dangers that face him in his new world. The original story, by Rudyard Kipling, is translated into Easy English by Dave Mckay and Sheri McKay Ellery and illustrated by his son, Kevin Mckay. 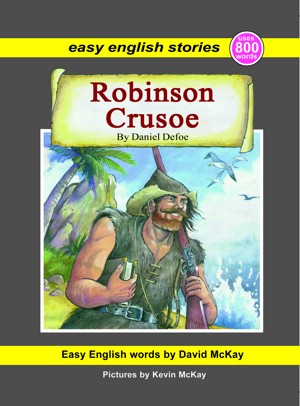 Robinson Crusoe - In Easy English by Dave Mckay
Price: Free! Words: 42,500. Language: English. Published: October 23, 2020. Categories: Fiction » Adventure » Sea adventures, Fiction » Classics
This classic tale, translated into Easy English by Dave Mckay and beautifully illustrated by his son, Kevin, allows those who are new to the English language a chance to enjoy the dangerous and exciting adventures of Robinson Crusoe, originally written by Daniel DeFoe in 1719. 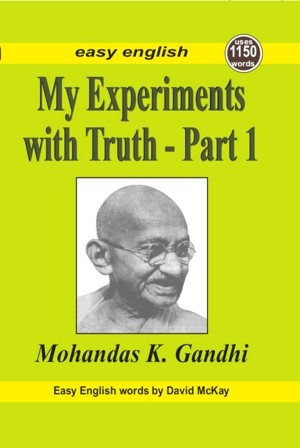 My Experiments with Truth, Part 1 by Dave Mckay
Price: Free! Words: 59,420. Language: English. Published: October 15, 2020. Categories: Nonfiction » Biography » Autobiographies & Memoirs
Here, in his own words, Mohandas Gandhi tells about his life as a child, a student, a lawyer, and as a leader of his people. His whole life was one long “experiment with truth”, and his story should encourage anyone who is trying to do what is right today, in a world where truth and love and faith and honesty seem to be losing the war against all that is evil. 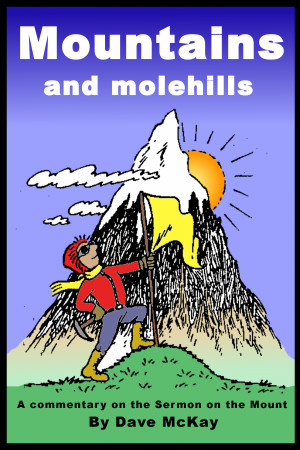 Mountains and Molehills - A Commentary on the Sermon on the Mount by Dave Mckay
Price: Free! Words: 9,830. Language: English. Published: August 3, 2020. Categories: Nonfiction » Religion & Spirituality » Biblical Commentary / New Testament, Nonfiction » Religion & Spirituality » Biblical Criticism & Interpretation / New Testament
McKay goes through Matthew 5, 6 and 7 line by line, bringing to light the teachings of Jesus from the Sermon on the Mount. He delivers a notoriously fiery sermon against materialism, apathy and hypocrisy in organised religion. His commentary is straight forward and easy to understand and gives an unflinching view into life as intended by Jesus and lived out by the first century Church. 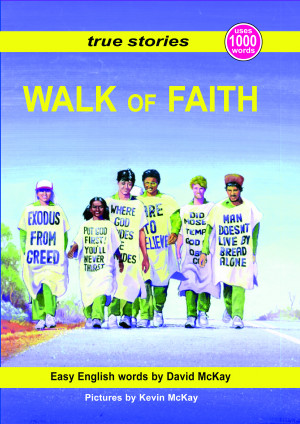 Walk of Faith by Dave Mckay
Price: Free! Words: 45,610. Language: English. Published: August 5, 2019. Categories: Nonfiction » Inspiration » Spiritual inspiration
Do miracles happen? Walk of Faith is the story of a group of young people who walked 1000 miles across an empty desert, without taking any food, water, money or even a change of clothes. They said that they believed God would feed them. The world came to watch them die, but here, in their own words, they tell how God helped them as they walked on, day after day. 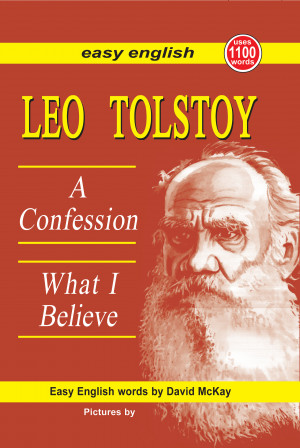 The great Russian writer had everything to live for. His novel, War and Peace, was said to be one of the greatest novels ever written, making the young writer world famous and very rich. His young wife gave him thirteen children, but for Leo Tolstoy something was still missing. The story of his hunt for meaning in life, which almost ended in him killing himself, is told with powerful and moving 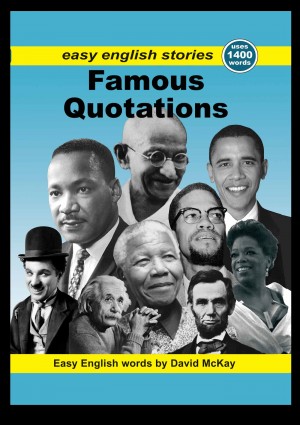 Over the years many people have said many wonderful things... some of them funny, some very wise, and some just aimed at making us think. But there are not enough books to hold all that has been said. So when a person is able to say a great truth in just a few words, others have often remembered it and saved it for people to read or hear over and over. They have become famous quotations 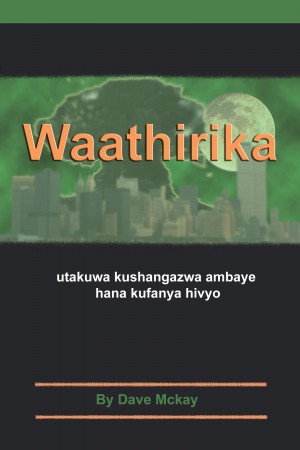 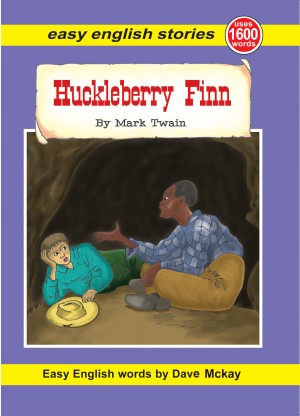 The Adventures of Huckleberry Finn was first printed in 1884, eight years after Mark Twain wrote The Adventures of Tom Sawyer. It starts up where the other story finished, and the two books together are believed to be the best that Mark Twain ever wrote. Huck travels down the Mississippi on a raft, facing many dangers on the way, and learning about life and what it means to be a friend. 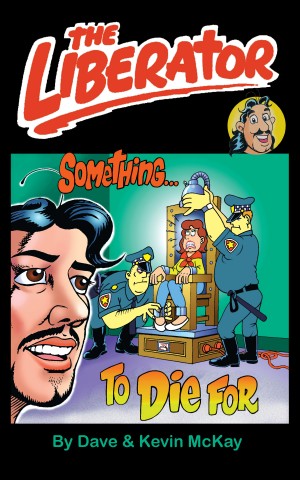 The story continues. Follow the final twelve chapters of the Gospel of Luke in this radical 48-page comic book. Everything from McDonald’s Restaurants to a modern tractor and chain saw come into the illustrations as readers are challenged to consider this ancient manuscript in a modern setting.
View their profile to see all of their books