Published 2013-12-16.
What do you read for pleasure?
Victorian romance or tragedy, fantasy, non-fiction, 'classics' and even the occasional modern thriller. I like to keep things varied, but I'll pick up pretty much anything that looks like it's been competently written. Occasionally I'll flick through some bad stuff for a good laugh as well.
What is your e-reading device of choice?
I was given a Kindle Fire for my birthday. It's awesome!
What book marketing techniques have been most effective for you?
Hmm. I've tried several now. Many of the paid-for advertising things don't yield amazing results, but a few are worthwhile. Having a good cover and lots of reviews helps, but it takes time to gather the reviews. I find that about 1 in a 1000 people will leave a review of the first book, and that proportion will rise as the series goes on (if you are a series writer, that is).
Describe your desk
Empty. I write on the floor or the sofa!
Where did you grow up, and how did this influence your writing?
I grew up in Yorkshire... no, I don't think it influenced my writing, but when I moved to Cambridge I was exposed to a very peculiar and very strong community. I think it's that change in social structure that reveals a new window or perspective with which to view the old one. That's what enabled me to explore different worlds and cultures, and to properly construct my observations of them.
When did you first start writing?
I think I wrote some appalling thing or other when I was nine, and composed some other derivative stuff after that, but I didn't start writing seriously until I was about twenty-six.
What's the story behind your latest book?
SPOILERS for previous books: It's the fifth instalment of The Fireblade Array. Artemi (a very old assassin/queen/fire-making wielder) has been sent to a fireless world as punishment, while her husband (Morghiad) is on a mission to unite several warring nations (two of which he has been born in) whilst battling a set of shadow-panthers that live in his mind. One of their sons is dead, and the energy that keeps the world living and breathing seems to be failing. Meanwhile, their friend, Silar, is trapped in another world and searching for a way to resurrect a woman he spent a single night with. So... as you may be able to guess, they have a great deal to fix!
What motivated you to become an indie author?
It was a bit of an accident, really. I wrote a story, and when I re-read it, I thought it was a damn-sight better than some of the stuff that was being traditionally published (apologies for my arrogance here, but it has some truth in it). I tried sending it to three, maybe four big names, but never heard back from them. Of course, I didn't know any better then, so my first thought was that it simply wasn't good enough, or perhaps that it could never sell in large enough quantities to be worth their while (it is a bit niche, as all new concepts are!). I tried self-publishing it as an experiment more than anything else. I never expected it to do as well as it did, but when the reviews started coming in... well, I thought perhaps it had some worth, after all. :D
How has Smashwords contributed to your success?
Usually about half my income comes from Smashwords partner sales, and the other half from Amazon. I've gathered extra reviews, extra fans, extra encouragement, extra exposure... it's all good!
What is the greatest joy of writing for you?
Stepping into another world and watching it grow as I type. I love playing with words and striving to do better and more interesting things with them each time. This sounds utterly cheesy, but I also love my characters and the things they get up to. They start to become a bit real after a while... ooh er!
What do your fans mean to you?
Fans are what keep me going on the days when I feel down. They are the reassurance that I should be published at all! Sometimes you get a one-star review. It happens to everyone - even Catcher in the Rye gets negative reviews - and they can be really, really gut-wrenching to read. I've cried at one-star reviews; I've even cried over a three-star review recently! I take them personally and I handle criticism poorly - I always have (I know - boo hoo, poor me etc!). Fans remind me that, for all the misery I may have caused one or two readers, there are still a few dozen out there who really enjoyed my work. It's (dare I say..) a relief to know that my writing is giving others some genuine entertainment!
Do you remember the first story you ever wrote?
Yes, It was about a dead blackbird I found in the garden. I laid the blame firmly at the paws of a neighbour's cat, and told a tale of how the blackbird's mate lived on. Bit tragic for a nine-year-old kid, but there we are.
What is your writing process?
I think about plots all the time, whatever I'm doing. I try to get 2,000 words done in a day, but sometimes that isn't possible. I had one day where I managed to fire off 8,000 or more words, but that required a lot of editing afterwards!! I used to be able to write beginning-to-end, but I find I can't do that anymore, so I just do the bits that need doing and then join it up later. Sometimes I start with dialogue, sometimes not. It varies!
How do you approach cover design?
I look at what else is out there for the genre. Readers have expectations, and they look for certain things. You can try to be different, but not too different!
Smashwords Interviews are created by the profiled author or publisher. 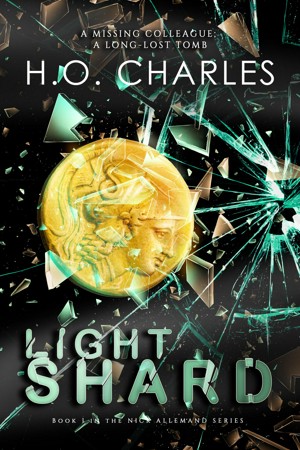 Light Shard by H. O. Charles
Price: $4.99 USD. Words: 125,360. Language: English. Published: November 25, 2022 by Idol: a Tree. Categories: Fiction » Fantasy » Contemporary, Fiction » Adventure » Action
When history becomes handmaiden to archaeology. Nick Allemand has almost everything present and correct: a job in archaeology that he loves, acceptable-to-moderate looks, more money than he could ever hope to spend, a bijou house in Grantaford, and friends he can count upon for just about anything. But all that changes when his colleague and fellow archaeologist Ava Galaniou goes missing. 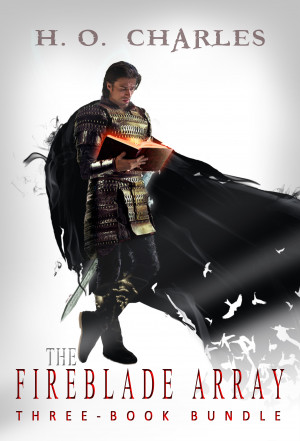 The Fireblade Array: Three-Book Bundle by H. O. Charles
Price: $9.99 USD. Words: 345,420. Language: British English. Published: March 7, 2019 by Idol: a Tree. Categories: Fiction » Fantasy » Epic
The fifth, sixth and seventh volumes of The Fireblade Array. Artemi, Morghiad and Silar fight fate, nature and themselves to stay alive, to stay together and to keep the world from burning. The bundle includes the books Voices of Blaze, Fall of Blaze and Ascent of Ice. 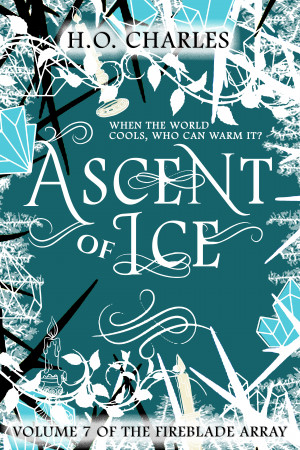 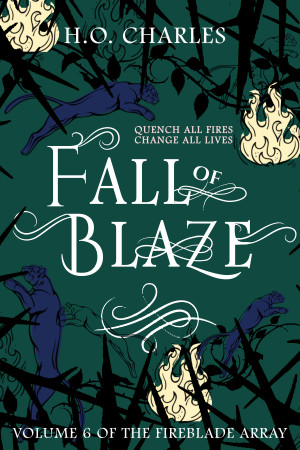 Fall of Blaze (Volume 6 of The Fireblade Array) by H. O. Charles
Series: The Fireblade Array, Book 6. Price: $2.99 USD. Words: 116,200. Language: British English. Published: March 30, 2017 by Idol: a Tree. Categories: Fiction » Fantasy » Epic, Fiction » Fantasy » General
The Darkworld turns ever more slowly, and its skies grow bleaker by the hour. Field by field, the lands fade to dust, while creatures of the night crawl and creep and seek to claim the day. Artemi's desire to protect those she loves has resulted in catastrophe - a catastrophe that would knock the strongest stuff from any warrior - and it may now fall to others to do the right thing. 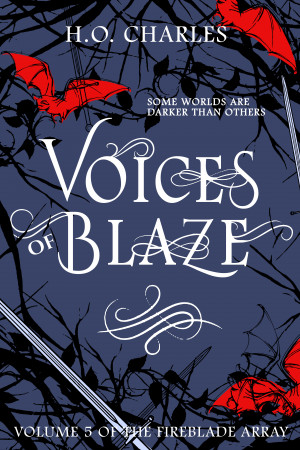 Voices of Blaze (Volume 5 of The Fireblade Array) by H. O. Charles
Series: The Fireblade Array, Book 5. Price: $2.99 USD. Words: 131,690. Language: British English. Published: September 13, 2014 by Idol: a Tree. Categories: Fiction » Fantasy » Epic, Fiction » Romance » Fantasy
Artemi has been condemned to the Nightworld - a place where the light of the sun will never warm the earth, where monsters rule the land, and where the fires burn wan and feeble. Few hopes lie there for her to mend her heartache. Elsewhere, our heroes must contend with unpalatable truths and shadows of the mind. The Voices of Blaze speak their words of advice, but will they bring help or harm? 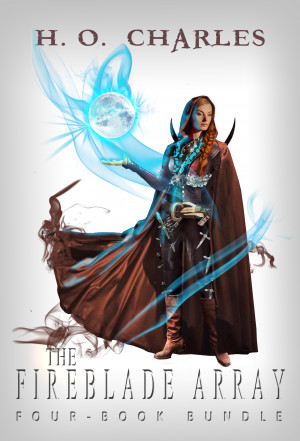 The Fireblade Array: 4-Book Bundle by H. O. Charles
Series: The Fireblade Array. Price: $9.99 USD. Words: 584,410. Language: English. Published: December 1, 2013 by Idol: a Tree. Categories: Fiction » Fantasy » Epic, Fiction » Romance » Fantasy
The first four volumes of The Fireblade Array. Artemi, Morghiad and Silar fight fate, nature and themselves to stay alive, to stay together and to keep the world from burning. The bundle includes the books City of Blaze, Nation of Blaze, Anomaly of Blaze and Blazed Union. 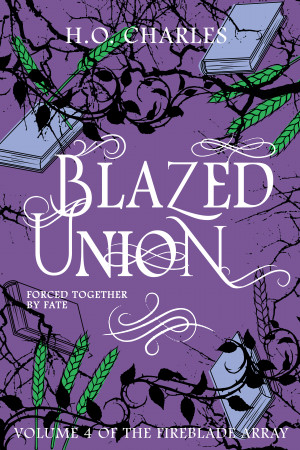 Blazed Union (Volume 4 of The Fireblade Array) by H. O. Charles
Series: The Fireblade Array, Book 4. Price: $2.99 USD. Words: 104,330. Language: British English. Published: February 18, 2013 by Idol: a Tree. Categories: Fiction » Fantasy » Epic, Fiction » Romance » Fantasy
The most horrific of outcomes has been avoided, but fate has other plans for those with fire and fury in their hearts. Silar must pay the price for his murderous act and follow his conscience, while King Tallyn of House Jade'an must come to realise the true implications of his abilities. In Hestavos, a vile business awaits the attention of our heroes. 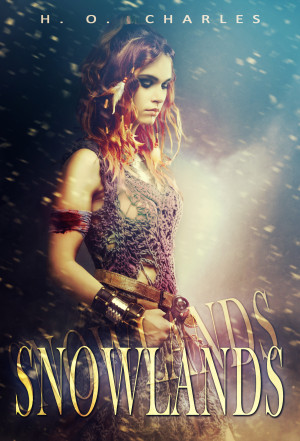 Snowlands by H. O. Charles
Price: $2.64 USD. Words: 41,730. Language: English. Published: May 7, 2012 by Idol: a Tree. Categories: Fiction » Science fiction » General, Fiction » Fantasy » General
A young woman wakes after a battle to find that the only clues to her identity are her injuries, the body of a dead man, and the tooth of an unknown creature. Four years pass in which she lives under a guessed name and becomes a student of medicine, before Raia is unexpectedly invited to the heart of the empire and the home of the cruel imperial family - The Fortress. 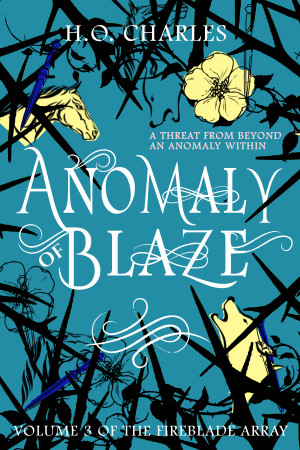 Anomaly of Blaze (Volume 3 of The Fireblade Array) by H. O. Charles
Series: The Fireblade Array, Book 3. Price: $2.99 USD. Words: 129,360. Language: English. Published: March 12, 2012 by Idol: a Tree. Categories: Fiction » Fantasy » Epic, Fiction » Romance » Fantasy
An Anomaly of Blaze is the cause of many troubles, but he may also offer a solution to the woes faced by our heroes. In Calidell, The Fireblade must deal with her wars alone, and the battles she faces are nothing like those of the ten millennia before. 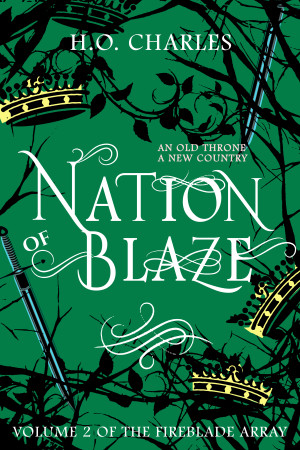 Nation of Blaze (Volume 2 of The Fireblade Array) by H. O. Charles
Series: The Fireblade Array, Book 2. Price: $2.99 USD. Words: 199,490. Language: English. Published: September 23, 2011 by Idol: a Tree. Categories: Fiction » Fantasy » Epic, Fiction » Romance » Fantasy
The country is leaderless. The queen is gone and hope is failing. Morghiad must find The Fireblade again if he is to secure his home and his heart, but the path will not be an easy one to tread. New enemies will rise to battle him as he battles with himself, and the most fearsome woman in history will continue to produce her army of blood-hungry eisiels.
View their profile to see all of their books