Published 2018-06-05.
Where did you grow up, and how did this influence your writing?
I grew up in the mountains of Southeastern Kentucky, though we moved to Nevada when I was a senior in high school. But those roots run deep. I have a love for ghost stories and superstitions. Myths and folklore run in my blood. Again, this is another reason I'm fascinated by the paranormal. Ghost hunting shows and true hauntings are a guilty pleasure. Some friends of mine and I are planning to go to a Virginia City ghost tour sometime this summer. So, it's not so surprising that I love me some magic and monsters.
Do you remember the first story you ever read, and the impact it had on you?
My parents were from the hippie era. My middle name, had I been a boy, would've been Aragorn. So it should be no surprise that they read the entire Lord of the Rings series to me when I was a kid. I can't remember a time I didn't know what a hobbit was. So you'll find a touch of fantasy or the paranormal in everything that I write. I can't help it. I still find myself looking for elves in the woods.
Do you remember the first story you ever wrote?
Yeah. My mom kept it and loves to pull it out to show me. It was called Quest for Fire and had more than a little in common with The Dark Crystal. I was eight. My mom let me use her typewriter and made copies of it after I illustrated it. I colored each copy to give to my teachers.

With the old pop-culture reference, I think I'm really dating myself with this one. Is this where I admit that I can still recite the goblin city poem from Labyrinth?
What inspires you to get out of bed each day?
Coffee, lots and lots of coffee. I'm totally not a morning person. But really, it's my family. I have a super supportive husband who I've been married to for 20 years. I have a daughter who's now a senior in high school that I am so proud of. I've also got a cute little Yorkie who hops on the bed and licks my face if I try to sleep too late. All in all, I've got a lot to get out of bed for.
When you're not writing, how do you spend your time?
Well, there is my day job. I haven't been able to quit that yet. But for relaxation, I'm a voracious reader. If my hubby knew how many books I go through a week, he'd tease me to no end. I also like going to the movies. I love the Marvel movies. I've been a Marvel fan since the early 90's. I'm also a little bit of an anime geek, or otaku to my fellow anime/manga fans.
What is the greatest joy of writing for you?
Creating new worlds and new people. I started out as a heavy fantasy reader. J.R.R. Tolkien, Piers Anthony, Katherine Kurtz, and others were my loves. I wanted to created people and places like that. Even though I now write romance and erotica, I still love spending the time just creating.
What is your writing process?
I am definitely a plotter. I get the kernel of an idea. I build the characters and world they live in. I have journals all over the place for each book I've written, to keep the details. Then I plot a general idea for each chapter. I don't always stick to the script, though. Sometimes my characters veer off. But at least I know I have the direction that the story is heading before I start. The few times I don't have that plot hashed out before I began, I ended up with half-finished stories and abandoned characters.

That doesn't include my copious use of sticky notes. When I'm well into a story, my hubby teases me that my office looks like one of those crime shows with the murder boards.
Describe your desk
Organized chaos. I have a spare bedroom for an office (I turned the closet into a giant bookshelf). With my first ever royalty check, I bought a big desk that I spread all my notes across. I know where everything is, but it looks like a stationary store exploded. Other than that, I have my laptop and printer on it. I'm sure it would drive someone with OCD utterly insane, but the system works for me.

All I have to say is it beats the folding table in the kitchen that I started out on.
What motivated you to become an indie author?
The death of my publishing houses. I'm an orphan of both Elora's Cave and Loose Id. After my second house closed, I took a close look at where the market was heading. I attended conferences and talked to other authors. Indie and hybrid seem to be the directions to go. So here I am, striking out on my own. And believe me, it's hard work. But in the end, I think I'm going to love the freedom.
What do your fans mean to you?
Everything! If you read my blog, Coming Out of My Shell: A Writer's New Beginning, you can see that my fans scare me a little. I'm kinda shy when it comes to my stories, and I always worry that my fans won't like them. Whenever I turn in a new story, I get a little sick. So maybe my fans mean a little too much. But when I get a positive response, it's an amazing feeling that I can't really describe. I love knowing that someone out there enjoyed reading about my characters as much as I enjoyed writing about them.
What are you working on next?
Oh, that's a hard question. I usually have several balls in the air. Right now, as I'm re-releasing my backlist novels, I'm starting two different series. Tales from the Keep is going to be a spin off of my Matched by Magic series, starting with a book titled Feast for an Incubus. I've been working on that one, on and off, for a while. I'm also starting a new series, more of a M/M romance and lighter erotic, focusing on a Fae apocalypse. I don't have a working title for that one yet.
Smashwords Interviews are created by the profiled author or publisher. 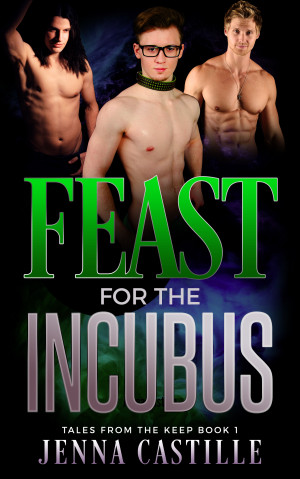 Feast for the Incubus, Tales from The Keep Book 1 by Jenna Castille
Price: $3.99 USD. Words: 40,830. Language: English. Published: November 13, 2018. Categories: Fiction » Erotica » Menage/Multiple Partners
The Keep, a place for paranormals to explore their every sexual desire, should never have allowed entrance to human Ian. But The Keep sees something in him, something desperately needed. Sorinu and Kit, owners of The Keep, had lost hope of finding Sorinu’s second mate, a human to keep his incubus hunger in check. Yet one small, lost human might just be the feast to satisfy an inhuman appetite. 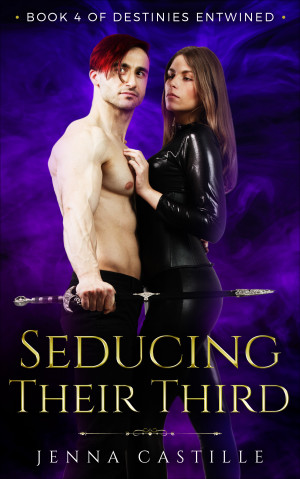 Seducing Their Third, Destinies Entwined Book 4 by Jenna Castille
Series: Destinies Entwined. Price: $3.99 USD. Words: 43,590. Language: English. Published: December 2, 2018. Categories: Fiction » Erotica » Menage/Multiple Partners
Trapped in an asylum, Brayden’s seen patients and doctors become possessed. Now a future filled with torment stretches out before him. In a past life, Logan created the Three, lovers capable of a ritual to stop demons from invading the mortal world. Visions lead Logan and Bree to search New Orleans for their missing lover. They pray they can save their Third before he falls prey to darkness. 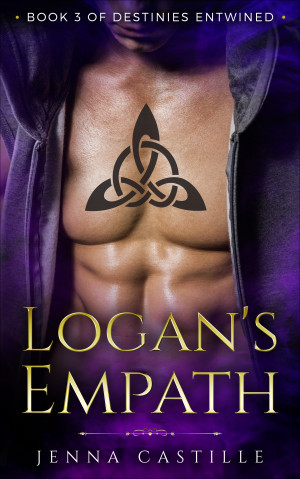 Logan's Empath, Destinies Entwined Book 3 by Jenna Castille
Series: Destinies Entwined. Price: $3.99 USD. Words: 43,590. Language: English. Published: November 27, 2018. Categories: Fiction » Erotica » Paranormal
In a past life, Logan created the Three, lovers capable of a ritual to stop demons from invading the mortal world. But in this incarnation, Logan’s Empath is in danger. Years ago, Bree’s parents were slaughtered, her life focusing on revenge. Now, the demon lord is hunting Bree. If Logan doesn’t win the trust and love of his Empath, he’ll lose her—and the rest of the world as well. 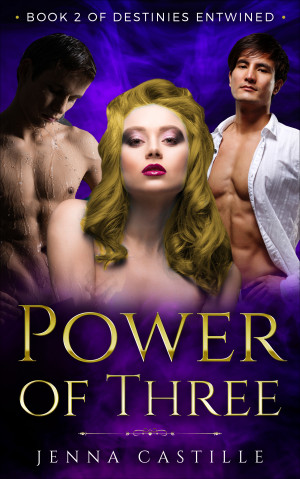 Power of Three, Destinies Entwined Book 2 by Jenna Castille
Series: Destinies Entwined. Price: $3.99 USD. Words: 52,680. Language: English. Published: October 30, 2018. Categories: Fiction » Erotica » Menage/Multiple Partners
Janice and Eric love each other and are ready to make a commitment. Then sexy businessman Ryuu steps in offering one of Eric’s deepest fantasies—a ménage. Ryuu’s job as a Visionary is to protect San Francisco from demonic invasion using the power of his Three. But the other Two remember nothing of their past lives with him. A Three divided is powerless. San Francisco may be doomed. 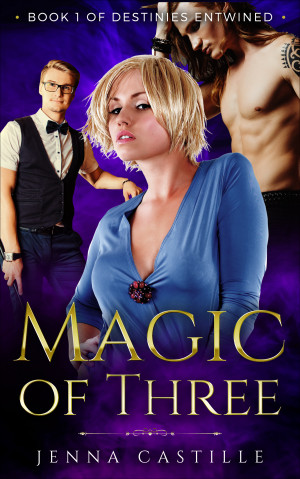 Magic of Three, Destinies Entwined Book 1 by Jenna Castille
Series: Destinies Entwined. Price: $3.99 USD. Words: 72,320. Language: English. Published: September 25, 2018. Categories: Fiction » Erotica » Menage/Multiple Partners
Visionary, Empath, and Catalyst—three people stand between the mortal world and a gateway to hell. Though Lisa feels drawn to Julian and Tim, stories of reincarnation and sex magic are a real mood kill. The couple must convince their reluctant Catalyst of their love for her before the demon horde descends on Sin City. 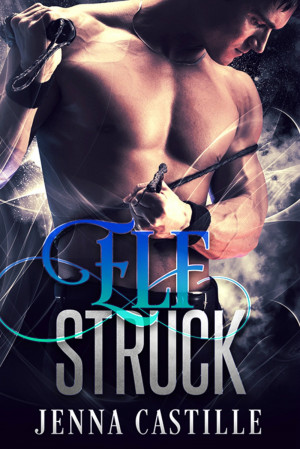 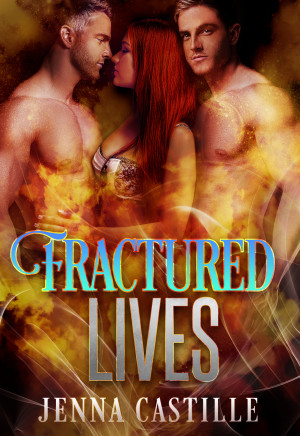 Fractured Lives, Matched by Magic Book 3 by Jenna Castille
Series: Matched by Magic. Price: $1.99 USD. Words: 52,100. Language: English. Published: August 14, 2018. Categories: Fiction » Erotica » Romance, Fiction » Erotica » Paranormal
Nora yearns for a man to love her despite her half-breed, fox-shifter and kitsune heritages. A warlock cursed by the Fae, Alexander is doomed to live as two people. Finding a woman willing to deal with their unique condition seems impossible. Divine Intervention matches the three, but relatives threaten the new match. Nora must fight to protect herself or be torn from her soulmates forever. 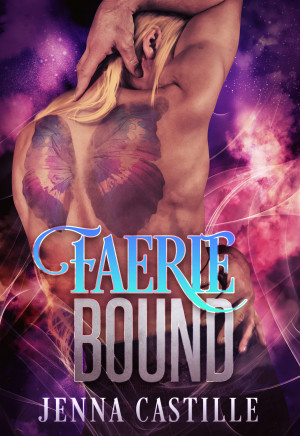 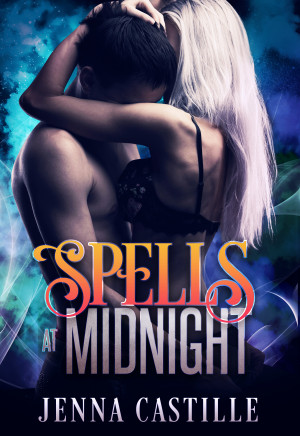 Spells at Midnight, Match by Magic Book 1 by Jenna Castille
Series: Matched by Magic. Price: $0.99 USD. Words: 17,390. Language: English. Published: June 6, 2018. Categories: Fiction » Erotica » Paranormal
Renee is a witch seeking love, but keeps coming up empty. Tired pointless searches, she casts a spell to draw her soulmate. A creature born from lust, Zachary is a satyr. He lives for sex—literally. So, when Renee drags him into the mortal world all he wants is a night of kinky fun and games. He doesn’t expect to find his destiny. Is theirs a lust match—or true love?