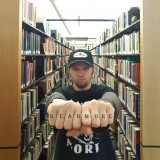 Published 2017-07-20.
What inspires you to get out of bed each day?
I know people want authors and artists to say things like, "the stories inside me that beg to be told," or "my muse won't let me sleep," but the truth is usually I have to pee first. Then I look over and see my fiancee, and that inspires me to get up and get some coffee so I can face the world. Once I have enough caffeine in my system, then I am ready to do some awesome shit with words or sounds.
When did you first start writing?
I wrote my first rap when I was 9-years-old, and I started writing short stories and Dungeons & Dragons adventures around age 12. Somewhere in my teens I began creating my own pen-and-paper role playing game and experimenting with poetry. Ever since, I have been bouncing between and/or combining all of the above.
Where did you grow up, and how did this influence your writing?
I grew up mostly in the Hudson Valley region of New York. It is beautiful, especially in the fall, but also haunted by about a million ghost stories and urban legends. So that has definitely influenced both my music and my writing, and probably helped push me towards horror and the darker side of other genres. The folklore surrounding the Hudson River State Hospital has directly inspired several of my projects and plays a part in my greater mythos.
Who or what are your biggest inspirations?
As a teen, it was Clive Barker, Stephen King, Wes Craven, John Carpenter, George Romero, Tim Burton. The biggest influence on my creativity was D&D. As an adult, I rediscovered Edgar Allan Poe and a bit of H.P. Lovecraft, fell in love with Ray Bradbury, George Orwell, Chuck Palahniuk, Anne Rice. College helped me appreciate the classic gothic stuff, the dark romantics, and epic poetry. Dante's Inferno is immortal genius. More recently, I read and follow Brian Keene, Armand Rosamilia, Chuck Buda, Stephanie Wytovich, Bruce Boston. Other big influences include Mike Patton, Rza and the Wu-Tang Clan, Midnight Syndicate, Saul Williams, Trent Reznor, George Carlin. I'm probably forgetting a thousand things. It sounds cliche, but life is the biggest inspiration. I like to write about current events, social issues, psychological problems, complexities of the human condition, and the stupidity of everyday people.
What is your writing process like?
I usually set the mood - door closed, lights out, incense, ambient music playlist - to wine and dine my muse. Though I always have a specific project I am working on, I also write down random ideas as they occur to me. Notebooks, scraps of paper, receipts, napkins, memos or recordings on my phone - whatever is near me at the time. Outlines are my best friends, but I will still go over all my ideas and one-liners to see if any of them will work for my current project. Most of what I write these days is part of the same mythos, so some of my ideas might sit around for years before I figure out where they fit in. Shit I wrote three years ago won't make sense until three years from now.
What motivated you to become an indie author?
As an indie music artist for 15+ years, I have recently noticed a lot of similarities with authors, especially in self-publishing. In music, you are either trying to make hits and get signed to a major label, or you are making art and probably self-producing and releasing your own demos to your small but devoted fan base. As far as I can tell, books are largely the same. If you are not trying to be the next contemporary literary fiction sensation (whatever any of that means), you are probably better off not chasing a traditional publishing deal. I like to write horror, surreal poetry, apocalyptic stuff. I don't want to be a best-seller, I just want to find readers that are into the same kind of dark and weird shit that I am.
When you're not writing, how do you spend your time?
Most of my time is taken up by school - one more year and I will have a Bachelor's degree. Also, until all this creative stuff starts paying off, I have a day job that takes up my weekends. Every waking moment in between that I am not writing or working on music, I am lounging or traveling with my fiancee.
Describe your desk
An organized mess. Piles of books, piles of papers, piles of mail. But do not be fooled! Each pile has a purpose. Every item is in a certain place for a certain reason. Together these objects make a cosmic design that magnifies my creativity and/or keeps my OCD at bay. And that empty spot is for my coffee cup.
What are you working on next?
I am working on three poetry ebook releases for 2017. The Consciousness Conspiracy (Remix) vol. 1 will be available on all digital platforms - thanks, Smashwords ;) - by mid-July. Volume 2 will only be available to people on my mailing list - sign up at josephvanburen.com. And my poetry chapbook + soundtrack, Masks: Shadow, is slated for a Halloween release.
What's the story behind your upcoming book?
Masks: Shadow is the first in a trilogy of poetry chapbooks with accompanying soundtracks. Most of the poems within are in the voice of a character who calls himself Dostah Shilailee. The book tells of his time in a variety of institutions and questionable experiments, but it also reveals prophecies of my post-apocalyptic mythos. At the same time, it is making a statement about our post-truth era of fake news and alternate facts, the frailty of truth and reality, and the struggle of the underdog to be heard in a world drowning in its own screams.
Smashwords Interviews are created by the profiled author or publisher. 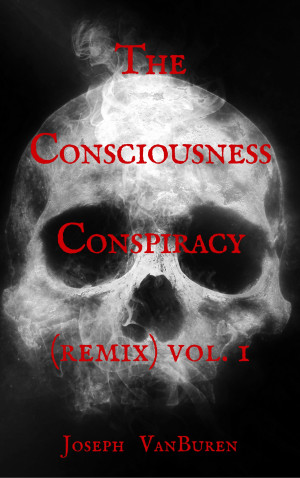