Published 2014-10-04.
What is your e-reading device of choice?
Good ol' fashioned Kindle.
Describe your desk
I have no desk. I write wherever I can find space in the house. I do a lot of writing from my lap. (Probably why I have such bad back issues.)
When did you first start writing?
I can't really remember ever not writing. I wrote a lot of stories about cats as a wee thing. When I was ten I wrote a lot of Redwall and Animorphs fan fiction, and a series of original stories about dragons. NaNoWriMo was what really got me into longform fiction; first did that my freshman year of high school.
What's the story behind your latest book?
Like most novels, Darkeye has a long and convoluted history. I know the first inklings I had of it were when I was in high school or possibly earlier, when I was doing a lot of research about different canids. (For fun, because that's the type of thing I consider "fun.") I adored African wild dogs from the minute I saw them and wanted to write a story about one. From there, the story started to grow, especially as I learned more about canine behavior, the history of domestication, et cetera... It only got really dark once I entered college, and when I finally wrote the novel I was struggling a lot with various issues in real life. I think that's reflected in the constant moral quandaries poor Mhumhi has to go through.
What motivated you to become an indie author?
Honestly? I'd never intended to; I always planned to go through a traditional publishing house for my work. Similarly, the Darkeye series was one I had never intended to publish except as a web novel, because I never thought of it as publishing-worthy. However... a lot of people liked it. A surprising amount of people! I was honored, and when my readers asked me for print and ebook versions of the series, I decided to go ahead and start editing.
What is the greatest joy of writing for you?
You know, writing has never been joyful for me. Quite the opposite; it's like a painful, annoying chore that I have to do now and then. Not sure why I still do it. But apparently I can't stop.
What do your fans mean to you?
Everything. No, seriously, EVERYTHING. Every bit of feedback, every comment on the story, every fanart... my gosh, you guys are the world to me.
What are you working on next?
Two things. First, a collection of short stories from the Darkeye universe that will help flesh out the world a bit more with details that didn't make it into the main story. It'll most likely be ebook-only. Second, I'll be starting work on a new web novel hopefully by November. I don't have a title yet, but it does involve witches and golems!
When you're not writing, how do you spend your time?
1. Thinking about what I'm going to write next. 2. Researching. 3. Walking dogs. 4. Video games. 5. Scrolling through tumblr with a glassy look in my eyes.
What is your writing process?
Kick an idea around for a few years, have about six false starts, then marathon-write the entire novel and ever look at it again.
Smashwords Interviews are created by the profiled author or publisher. 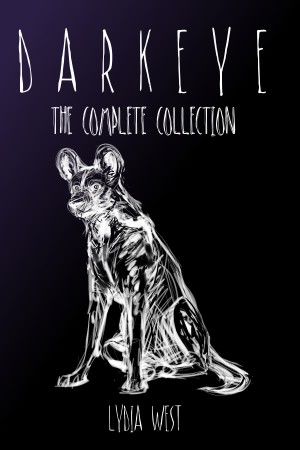 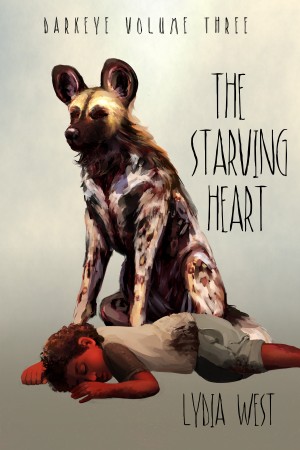 The Starving Heart (Darkeye Volume 3) by Lydia West
Series: Darkeye. Price: $6.99 USD. Words: 184,970. Language: English. Published: January 1, 2015. Categories: Fiction » Science fiction » Apocalyptic, Fiction » Fantasy » General
In order to protect the child Tareq from murderous painted dogs, Mhumhi and his sister Kutta have fled Wild Dog City for the endless desert. They are searching for the so-called forbidden place- a building where all the remaining human secrets are locked away. The answers to everything that happened to make Wild Dog City what it is. But they are being pursued... 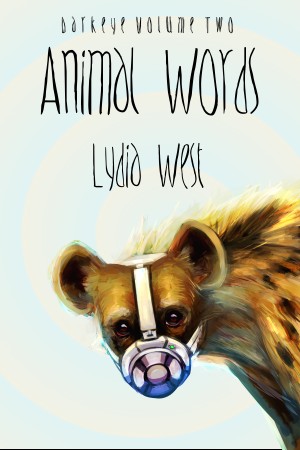 Animal Words (Darkeye Volume 2) by Lydia West
Series: Darkeye. Price: $5.99 USD. Words: 107,960. Language: English. Published: November 1, 2014. Categories: Fiction » Science fiction » Apocalyptic, Fiction » Fantasy » General
Mhumhi and his children are captured and taken below the city by the mysterious bouda, a group of humans with strange ties to spotted hyenas. These humans are not helpless: in fact, they threaten to upset the power balance of the city. Mhumhi will have to make a choice- should he continue to make his human children a part of his dangerous life, or should he entrust them back to their own kind? 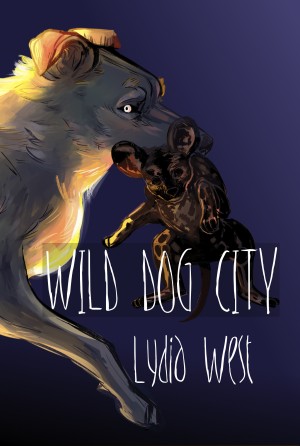 Wild Dog City (Darkeye Volume 1) by Lydia West
Series: Darkeye. Price: $5.99 USD. Words: 92,880. Language: English. Published: October 1, 2014. Categories: Fiction » Science fiction » Utopias & dystopias, Fiction » Fantasy » Urban
In a city ruled by a massive pack of painted dogs and the threat of predatory monsters called hulkers, young orphan Mhumhi searches for his adoptive mother. Instead he stumbles upon a pair of young hulkers that need someone to care for them- but in doing so, Mhumhi will draw closer to a dangerous secret.