Published 2013-12-20.
When did you first start writing?
I always had stories swirling around my mind, but it wasn't until my late teens that I started writing them down.
What's the story behind your latest book?
Writing the first four books in the Jeff Resnick Mystery series was a learning experience--and it was mostly learning who these characters were. I was writing the four books similtaneously, so that if something happened in the 4th book, I could go back to the first to lay the groundwork. I tried to understand why Jeff did some of the (rather odd) things he did. I was very unsure of myself as a storyteller, and a number of published writers in my local writing group were generous with their critiques. One of them really stood out. While reading Cheated by Death, I was asked, "How long has this man had an eating disorder?" A what?

And then she went on to point out several areas in the book where clearly Jeff's relationship with food is at odds. It was then I realized it was a thread through the previous books as well--something I hadn't even noticed. The idea fascinated me, and I wrote a short story to explore the issue. I wrote short stories to explore other areas of his past, too. I've told a number of readers about the stories, and they've encouraged me to publish them.

The stories in Evolution: Jeff Resnick's Backstory are not mysteries. They're about a boy struggling to grow up, and the very rocky relationship he has with his older brother. They help explain why the two were estranged for eighteen years, and hopefully contain the seeds of their fierce friendship to come.
What motivated you to become an indie author?
Poor distribution from the small press that had been distributing my Jeff Resnick series. I had faith in my characters and knew if a bigger audience could find them that the stories would find readers. I was right.
How has Smashwords contributed to your success?
Distribution to other vendors, like Apple and Sony. I've been told Apple's iBooks is the 2nd biggest ebook seller. I'm happy to have my books for sale in their iBooks stor.
How do you discover the ebooks you read?
Word of mouth is the absolute best advertising, and I find new books from recommendations from my friends.
Do you remember the first story you ever wrote?
Yes. It's better forgotten.
What is your writing process?
I'm a "pantster." That is, I write by the seat of my pants. I don't have an elaborate outline. I have a vague idea of where the story should go and I let the characters guide me. Sometimes it makes the story flow fast (as it did in Dark Waters) and sometimes it involves a lot of rewriting. But it's fun to see the story unfold organically instead of being forced to stick to a preset list.
How do you approach cover design?
For the most part, I know what I want to illustrate the entire story. Often I'll choose one scene to represent the entire book. For Murder on the Mind, there's a scene that happens in a snowy field where Jeff and Richard discover vital evidence for a murder investigation. It's bleak, and yet it's a powerful and pivotal scene for both Jeff and Richard learning to trust one another after a long estrangement.
What is your e-reading device of choice?
I have two Kindles, both of which were given to me as gifts. I don't think I would have had a preference if I'd had to choose. I like both the Nook and Kobo devices, too.
Describe your desk
Messy. But I can usually find what I need.
What do your fans mean to you?
I love to hear from my readers, especially when one of my books or stories touches them. I have three author names, which makes it difficult for my readers to find all my various books and stories. I have a newsletter (sign-up on my website or blog).
Smashwords Interviews are created by the profiled author or publisher. 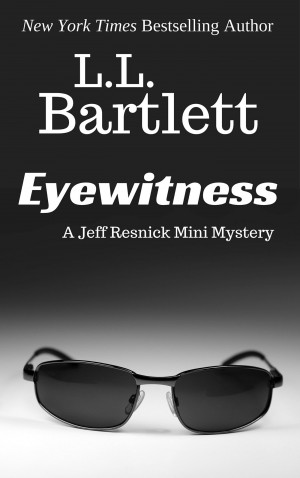 Eyewitness by L.L.
Price: $2.99 USD. Words: 19,960. Language: English. Published: July 1, 2020. Categories: Fiction » Mystery & detective » Hard-Boiled, Fiction » Thriller & suspense » Supernatural
It’s been two years since the mugging that nearly killed him, and Jeff Resnick is finally putting his life back together. But his sense of peace is shattered when the detective investigating his wife’s murder calls to update him on the cold case. Can Jeff's sixth sense can help him find the man who killed Shelley Resnick? 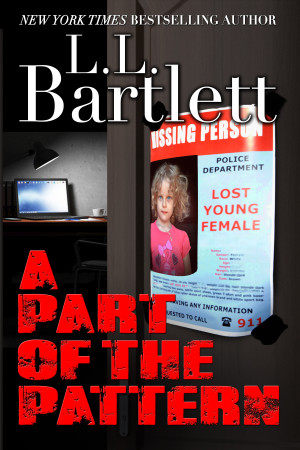 A Part Of The Pattern by L.L.
Series: Jeff Resnick's Personal Files. Price: $2.99 USD. Words: 14,740. Language: English. Published: September 18, 2017 by L.L.. Categories: Fiction » Mystery & detective » Hard-Boiled, Fiction » Mystery & detective » Short Stories
Jeff Resnick is drawn to solving crimes. His brother, Richard, thinks that could be the basis of a paying business. Reluctantly, Jeff agrees, and their first case is about a child who vanished two decades before. Meanwhile, Jeff bumps into an acquaintance whose history is very similar to that of the missing girl. Is it coincidence or is there a pattern that links him to her and his future? 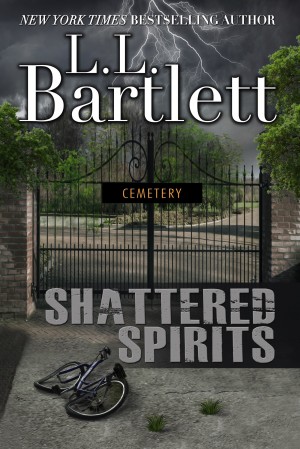 Shattered Spirits by L.L.
Series: The Jeff Resnick Mysteries. Price: $5.99 USD. Words: 81,050. Language: English. Published: July 25, 2016. Categories: Fiction » Mystery & detective » Hard-Boiled, Fiction » Mystery & detective » Amateur sleuth
If it weren’t for bad luck, Jeff Resnick would have no luck at all! While riding his new racing bike, Jeff is hit by an SUV, an accident which has a cascade effect on his life.But it’s soon apparent that his so-called random accident is anything but, and the murder of a close friend has a hobbled Jeff on the run. Can he discover who’s out to destroy his life—and threaten those he loves most? 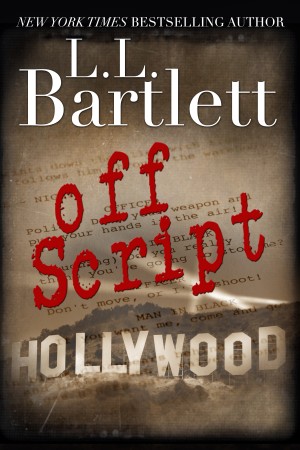 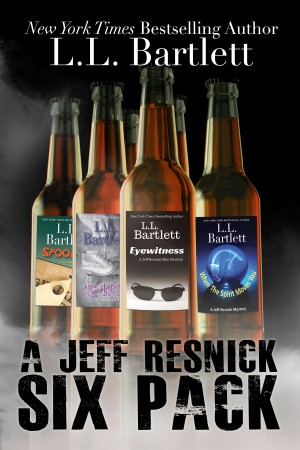 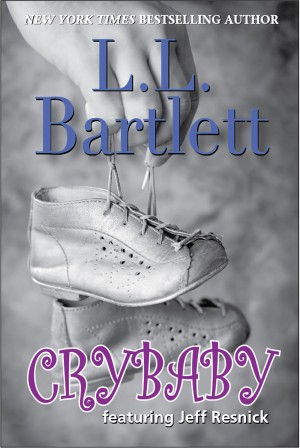 Crybaby by L.L.
Series: Jeff Resnick's Personal Files. Price: $0.99 USD. Words: 7,460. Language: English. Published: February 3, 2015. Categories: Fiction » Thriller & suspense » General, Nonfiction » Health, wellbeing, & medicine » Children’s health
Jeff Resnick—babysitter? It wasn’t a reference that had ever graced his personal résumé, but when he’s entrusted to care for his brother’s most prized possession—his infant daughter—Jeff is tested in ways he could never have anticipated. With his girlfriend Maggie unavailable, Jeff has only one person he can turn to for advice when his tiny niece falls ill on his watch. 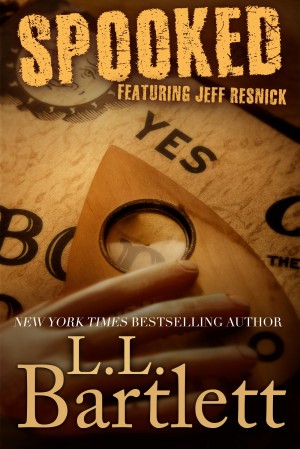 Spooked! by L.L.
Series: Jeff Resnick's Personal Files. Price: $0.99 USD. Words: 4,750. Language: English. Published: October 29, 2014. Categories: Fiction » Holiday » Halloween, Fiction » Mystery & detective » General
The trick-or-treaters have gone home and now it's time for the adults to celebrate All Hallows Eve. When Maggie suggests they consult an Ouija board, Jeff Resnick thinks it'll be anything but fun. And when they conjure up a ghost from Jeff's past, the game turns dangerous for the most vulnerable person in his life. (This short story directly follows Dark Waters.) 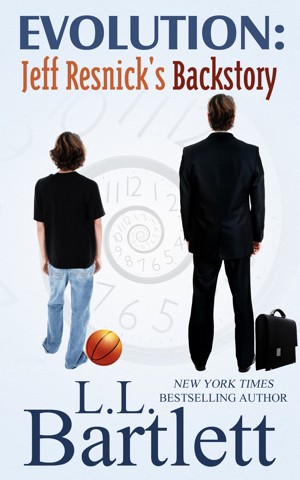 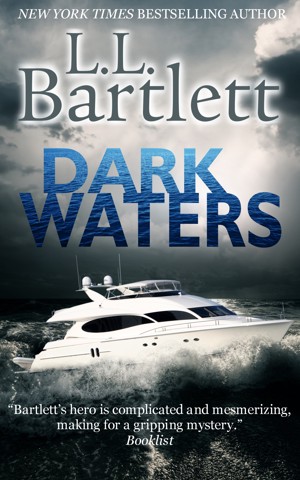 Dark Waters by L.L.
Series: The Jeff Resnick Mysteries, Book 6. Price: $4.99 USD. Words: 82,880. Language: English. Published: October 1, 2013. Categories: Fiction » Mystery & detective » Hard-Boiled, Fiction » Thriller & suspense » Psychological thriller
For Jeff Resnick, the trouble starts with a near-death experience. Brenda's family comes to visit and one of them reminds Jeff of the thugs who mugged him. His brother has taken possession of an expensive boat. The yacht holds a deadly secret, one destined to turn his world upside down. Will Jeff solve the puzzle before his vision of near death becomes a reality? 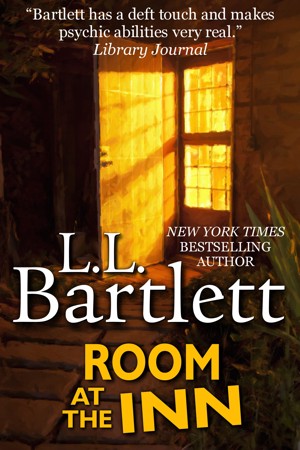 Room At The Inn by L.L.
Series: The Jeff Resnick Mysteries, Book 3. Price: $4.99 USD. Words: 71,920. Language: English. Published: September 4, 2012. Categories: Fiction » Mystery & detective » Hard-Boiled, Fiction » Thriller & suspense » General
Jeff and Maggie head to a Vermont inn for a working vacation, but when a guest is murdered, they must use all their wits to bring a ruthless killer to justice.
View their profile to see all of their books